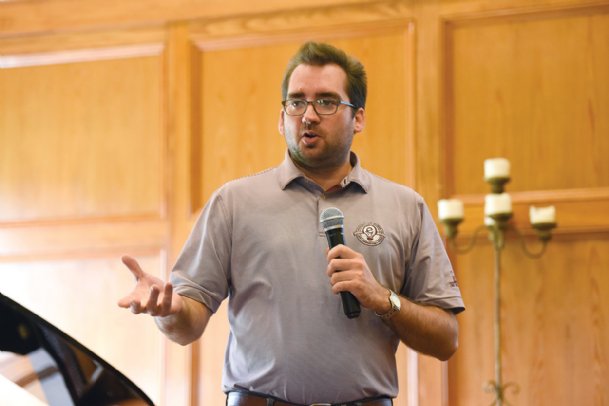 Eric Hill, the director of the Center for Entrepreneurship and Outreach at Mississippi State University, speaks about successful student businesses during the Rotary Club of Columbus meeting on Tuesday at Lion Hills Center in Columbus. Hill was asked to speak at Rotary Club after he wrote an article titled "Mississippi Could be the Technology Capital of the Country - We Just Don't Believe it Yet," in which he addresses how he believes Mississippi can become a leader in technology businesses. Photo by: Claire Hassler/Dispatch Staff

Jeffrey Rupp, the director of Outreach and Corporate Engagement for the College of Business at Mississippi State University, answers audience questions during the Rotary Club of Columbus meeting on Tuesday at Lion Hills Center in Columbus.
Photo by: Claire Hassler/Dispatch Staff

The now 31-year-old entrepreneur remembers his first unofficial tryout as a businessman in second grade, selling paper airplanes at school. As that enterprising passion persisted, it propelled him to form his first web solutions firm, HillTech, at the age of 16, which he sold for a fortune after five years of operation.

"I've always been interested in business since I was a kid," Hill said. "My parents encouraged it when I was very young."

It is in his own experience that Hill sees the potential for young entrepreneurship and technology startups in the state of Mississippi. Appealing to members of the Columbus Rotary Club Tuesday afternoon, Hill -- now director for the Center for Entrepreneurship and Outreach at Mississippi State University -- called for local investment and support in helping nurture young talents in the business community and bring capital for the Golden Triangle.

At the center at MSU, Hill said he assists students without business experience to shape their startup ideas into executable plans. The operation, primarily funded through a school endowment fund established by alumni, provides roughly $100,000 to more than 100 teams of students to kick-start their ventures, Hill told The Dispatch. Each team could receive $500 to $7,500, he said.

Over the years, Hill said the operation has grown from attracting 20 to 30 teams a year to 120 this year. In the past three years, he has helped establish six or seven companies that are now valued at a combined more than $15 million.

For instance, Glo, a downtown Starkville business that sells glowing plastic cubes, was conceived at the center by MSU graduate Hagan Walker, Hill said. The company, valued at more than $5 million, now ships its product to 36 countries.

Hill said his passion in assisting young students began when he realized that many young talents hold a doubtful attitude toward business development.

"When we started that business in high school and sold it, I sort of never doubted that it was possible," he told The Dispatch. "It struck me that not everybody felt that way, not everybody had been propped up that they were capable."

The attitude worsened, he said, when news coverage of small businesses shutting down during the pandemic appears disheartening.

"Attitude plays a lot into success," Hill told The Dispatch. "When the attitude is that all business in the state is dying and sort of helpless in the pandemic, it frustrated me because it just wasn't checking with all of reality, seeing multiple companies, including my own, raising money."

While retail stores and other brick-and-mortar businesses suffered, he said, technology companies were actually growing. The nature of the business is not bound by geography and attracts employees and customers from all over the world, he said.

Jeffrey Rupp, former Columbus mayor and now the director of Outreach and Corporate Engagement for the College of Business at MSU, also spoke at Tuesday's club meeting. Like Hill, Rupp emphasized the importance of cultivating the young generation into business leaders.

"That's what we have to think about: What's going to keep the next generation's entrepreneurs here? Because they are going to be the ones sitting down at this table 10 years from now," Rupp said.

Investing in young entrepreneurship in Mississippi

Trusting young talents in leading the development of technology startups, he said, is important and fully possible for Mississippi. For instance, the state has a low cost of living that would attract businesses, Hill said.

"Mississippi is in a perfect position to be a leader in technology," Hill said Tuesday. "We have so many right ingredients today ready to go, it's almost silly it hasn't happened yet.

"Mississippi, in its DNA, is scrappy," he added. "We have just as good internet connection ... we have plenty of working space; there's plenty of hard-working people. When you think about workforce infrastructure and global connectivity, we have all those things."

Local communities can offer all kinds of support to aspiring entrepreneurs, Hill said. For instance, students need directions when they are kick-starting a business.

"When you are coaching an entrepreneur, it's about building judgment, mindset that someone in their early 20s doesn't have yet," Hill told Rotarians. "Each of you have some sort of skill set and some expertise that's valuable to an entrepreneur."

For the state's economy to shift toward technology development, Hill said, more investments need to be made in coding programs and teaching young kids software development. Too many software developers, he said, are outsourced in other countries, and Mississippi needs to nurture its own talents.

"I believe in the work of the (Mississippi) Coding Academies, and we should be funding that and similar programs with ferocity," Hill wrote in a blog post he shared with the Rotary Club members Tuesday. "K-12 students should be learning how to code as well."

Rupp said planting the seeds in children may help foster their interest in business development. He helped launch the program Lemonade Day, which was held all over the Golden Triangle last year.

"They set up their own lemonade stands," Rupp said. "We tell them to do three things with the money: Save some, spend some and share some."

Other business development programs, Rupp said, are also held in high schools, which form a streamline of entrepreneurship from K-12 students all the way to college graduates.

"Imagine being 25 years old, you got a company that's worth $1 million. You are going to stay in Starkville?" Rupp said. "But we have had companies stay because they felt the support was there."