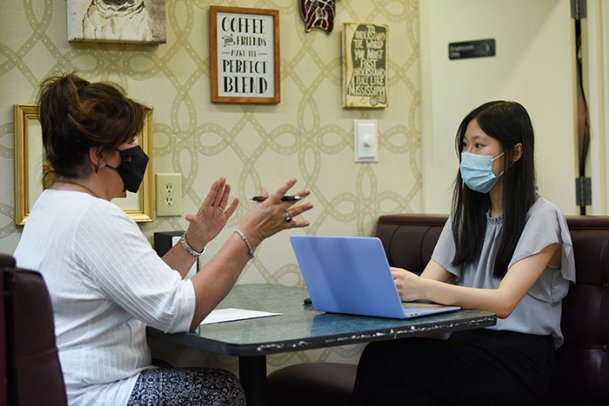 From left, Carolyn Abadie, the owner of Book Mart & Cafe, and Hannah Jian discuss the details of creating an online platform for Book Mart & Cafe to sell books on Friday in Starkville. Jian wanted a way to help businesses that are impacted by COVID-19, so she decided to start a pro-bono consulting organization and offer services to a few Starkville businesses. Photo by: Claire Hassler/Dispatch Staff 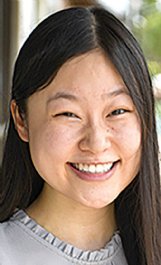 Business at the Book Mart & Cafe on Main Street in Starkville doesn't look much like it did before the COVID-19 pandemic descended on the area in March.

Most of the Mississippi State University students who frequented the bookstore and the Bully Shop inside it went home for the summer. A lot of older readers began to stay away for fear of exposure to the virus.

"People are coming in and buying things," owner Carolyn Abadie said. "It's just a lot different."

With the businesses to her left and right both gone and fewer customers coming in to browse, Abadie knew she needed to make an effort to start selling books, MSU merchandise and more on the internet, but she didn't know quite how to go about it.

At a recent meeting of Starkville's Main Street Association on the upper level of her store, Abadie talked about her need for an online sales presence with Hunter Harrington, director of membership development for the Greater Starkville Development Partnership. Not long afterward, Harrington called Abadie with an opportunity.

The Partnership had recently been contacted by 2019 Starkville High School valedictorian Hannah Jian, who, along with four business administration classmates at Emory University in Atlanta, established Thrive Strategy and Consulting in June. The pro-bono organization is designed to help small businesses in its members' respective hometowns -- Starkville; Los Angeles; Gainesville, Florida; and cities in Georgia and Colorado -- navigate the financial challenges of the coronavirus pandemic.

"We have resources," Jian said. "We have expertise that we think can actually translate to real help for small businesses in our communities."

One of Thrive's listed specialties is digital branding, and Abadie, interested, set up a meeting with Jian. On Friday afternoon, the two Starkville High graduates shared a booth in the bookstore's cafe area, and they discussed ways Thrive could help the Book Mart.

By the time Jian left 90 minutes later, Abadie had a sheet full of notes, a promise to meet again the following week and a deepened appreciation of Jian's efforts.

"Starkville's close to her heart," Abadie said. "She's wanting to help the town where she lives. It means more when it comes from somebody who grew up here."

Jian returned to Starkville when Emory's Atlanta campus shut down in March because of COVID-19, and apart from finishing up online classes and tinkering with a couple projects, she was mostly "chilling" at home.

Then a thought struck her: "How can I help?"

At Emory, she'd already had several forays into business consulting. With the undergraduate-run Impact Investment Group, Jian helped Johari Africa -- which teaches African refugee women how to sew, typically creating cultural African clothing and jewelry -- produce face masks instead. As part of Ponce & Friends, a virtual organization of business students at Emory, Jian helped perform market and competitor analysis for an Atlanta robotics startup hoping to take advantage of the many companies turning to automation in their warehouses.

So she and four classmates decided to found Thrive in June to take their work back to their respective hometowns. The organization focuses on market research and digital branding, and it is also aimed at helping restaurants switch to contactless menus via QR codes by putting the eateries in touch with the Los Angeles-based start up Orderspot.

In Starkville, Jian said she is working with Glo, where she interned in high school, helping the prosperous company generate customer leads after the cancellation of trade shows badly hurt the business.

Soon after, she reached out to the Partnership, asking them to circulate the flyer for Thrive; so far, Abadie is the organization's only bite.

"Right now, we're really at the discretion of how many businesses want to work with us," Jian said.

Partnership CEO Mike Tagert said Jian's help in assisting businesses pivot to digital strategies and new means of serving customers in the midst of a public health crisis is critical and that her experience growing up in the area is a point in her favor.

"Having people such as Hannah pitch in and offer that assistance is vital for the local economy," Tagert said. "The fact that she is from Starkville, certainly that helps small business owners understand that she has a feel for the community and the town."

According to Forbes.com, U.S. retailers' year-over-year online revenue was up 49 percent in early January. By mid-April, that number had risen to 68 percent.

Chip Templeton, director of the Mississippi Small Business Development Center at Mississippi State, said digitalization is "definitely the way" for businesses like Abadie's to rebound from a decrease in in-store traffic.

"This may be an opportunity to streamline and convert things over," Templeton said.

Abadie is attempting to do precisely that, as she and Jian discussed a plan to list online items from each of the store's most popular sections: "trade books" from publishers that are intended for general readership; children's books; Mississippi State gear from the Bully Shop; food and drinks from the cafe; and the discounted vintage books upstairs. Jian said the website Shopify would allow the Book Mart to sell 200 items at a time for a fee of $20 per month.

While Jian acknowledged it would take Abadie and her staff some time to take photos and write descriptions of each item the store plans to sell, Jian said it would be easier than trying to sell things through the Book Mart's own site.

Abadie said she plans to look around at what Shopify offers and see how other stores are marketing online products before she meets with Jian again next Friday. Abadie also wants to bulk up her store's Facebook and Instagram and possibly even expand to Twitter or TikTok.

With the increased emphasis on e-commerce during the pandemic, Tagert said transitions like Abadie's will help bring in new customers and serve them in a new way.

"Any additional ways that our small business owners have to interact with their customer base is more important than ever," Tagert said. "They have to be diverse. They have to have secondary and tertiary ways of selling their products."

So far, Jian has facilitated that, working with Abadie to pursue a new line of business the owner admitted that she would have struggled with herself.

"She can provide guidance for small business owners who have not traditionally relied on e-commerce," Tagert said.

More left to give

Abadie and the Book Mart are just the start in Starkville for Jian, but Tagert said assisting even a single business is as good a start as any.

"While she may be helping one individual business owner, it helps the community as a whole make it through," Tagert said.

Jian made it clear the help she offers won't stop with Abadie, and it won't be a temporary thing, either. She wants to continue her work throughout her undergraduate career at Emory, consulting for businesses in Starkville, Atlanta and her team members' communities, too.

She said working with small business owners has made her aware of the unique challenges the pandemic has brought upon them -- things she hasn't necessarily seen as a college student -- has been "extra motivation" to continue to help.

"As a student, whatever happens to this business, it doesn't really affect me that much because, you know, I'm in college. I'm not working for them. My livelihood doesn't depend on this," Jian said. "But working with these entrepreneurs and CEOs, you really see how important your business is to them and how much they're being affected by the pandemic, and it just makes you want to help out even more."

Jian found out Friday her classes at Emory will be remote this fall, meaning she'll be staying in Starkville for the foreseeable future as she continues her studies.

It's another sign the pandemic isn't over yet -- and that Jian and Thrive have more help left to give.