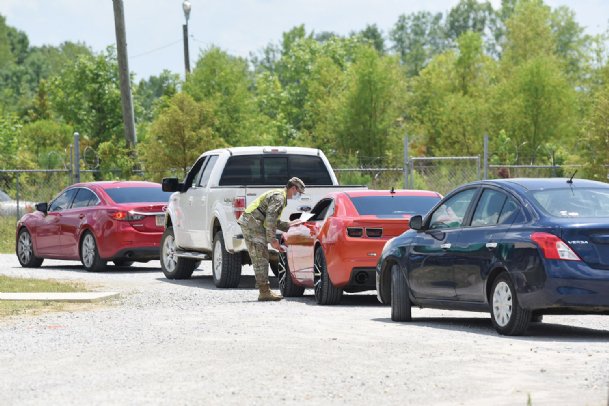 Ryan Collins speaks to a person getting tested for COVID-19 through their car window on Monday outside the Oktibbeha County Community Safe Room in Starkville. The state health department and the University of Mississippi Medical Center tested more than 150 people between 9 a.m. and 2 p.m. Photo by: Claire Hassler/Dispatch Staff 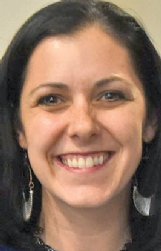 When a person tests for COVID-19, the first thing they want to know is whether they have contracted the virus.

Given the increase, the next logical question posed at a lab, clinic or drive-in test site is how long it will take to get the results.

Short answer: Longer than it used to take.

"When we first started testing, back in March, it took three to five days pretty much for everybody," said Amy Bogue, President of Allego Clinic in Columbus. "In some cases we were getting results back in three days. But about two weeks ago, everything changed. Now, it's 10 to 13 days. I've talked to a lot of the other clinics in the area and they're saying the same thing."

Bogue said the longer delay is partly a function of more testing.

"When the economy started to open up, people were out more and were exposed to the virus and to other people who had tested positive," she said. "When an employer had a sick employee, they were told they needed to be tested before returning to work. So there's definitely more demand for testing now than we have a couple of months ago."

Another factor -- Bogue believes it to be the biggest factor -- is a back-up at the labs used to analyze the tests.

Bogue's clinics use two labs for the analysis, American Esoteric Labs and The Path Group. Couriers pick up tests each day and deliver them to the labs, both of which are located in Memphis.

Although neither lab responded to requests for information, Bogue said the lab representatives she has spoken to attribute the delays to a shortage of reagents (a substance used to cause a chemical reaction revealing a positive or negative result) and manpower shortage.

"They're being inundated with tests and they're having a hard time with supplies and workers," Bogue said.

Independent clinics are at the back of the line when it comes to having tests processed, Bogue said.

"The first priority for the labs are tests from Emergency Rooms first, then hospital inpatients followed by people having elective surgery," she said. "Clinics fall in line behind that."

Because hospitals have priority status for lab test processing, local hospitals report the wait time for test results have been fairly consistent.

Both OCH Regional Medical Center in Starkville and Baptist Memorial Hospital-Golden Triangle in Columbus report the results in two or three days.

"That's been pretty typical," said Melissa Gilmore, Director of Laboratory Services at Baptist. "The turn-around times were much longer last week, though, because of a huge backlog of tests which have been sent there from several states. That is not the norm. For the better part of this crisis, they have been able to get the result in at least three days."

The University of Mississippi Medical Center, in conjunction with the state health department, has been staging free drive-in test collection events throughout the state. On Friday, 154 people in Columbus were tested. On Monday, UMMC collected 174 tests from an event in Starkville.

UMMC spokesman Marc Rolph said UMMC tests an average of 1,000 people per day, either at drive-in events or at its facility in Jackson.

"We tell people to expect the results to take about a week," Rolph said.

For UMMC, the biggest delay is not at the lab, but in notifying people of the results.

"We can run 90 lab specimens at a time," Rolph said. "But notifying people of the results is one person at a time. When you factor in missed calls -- the rules don't allow us to leave the results in a voicemail message -- or emails that have the wrong address or get lost, that's where the biggest delays are."

Rapid-testing is becoming available, but Bogue said she's not sure how much relief that will provide the testing system.

"We're getting a very limited supply of the rapid tests," Bogue said. "We have to prioritize because of that. For us, that means people who are most vulnerable or essential employees like firefighters or police officers."

She said reliability of rapid tests is about 80-84 percent, compared to the 99 percent accuracy rate of the swab tests sent to labs.

"Because of that, our policy is that if a person tests negative on the rapid tests, we're going to swab and send it to the lab anyway, because of the accuracy issues with the rapid test," she said.