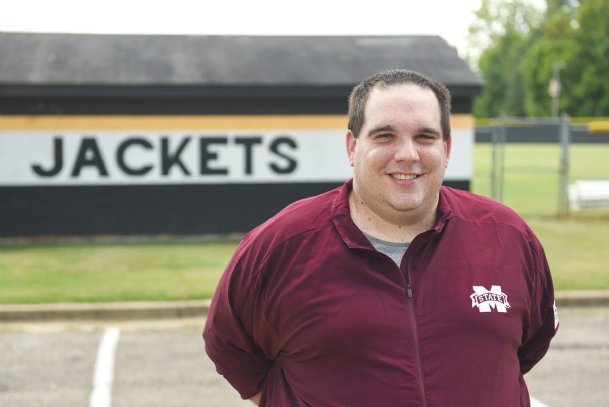 Gavin Gilbert poses for a portrait on Friday at Starkville High School. Gilbert has recorded statistics for SHS games since 2009 and has stats going back to the 1920s. Photo by: Claire Hassler/Dispatch Staff

Rushing through the rain armed with a pen and paper, Gavin Gilbert entered the press box at Yellow Jacket Stadium and began to scribble.

Keeping note of that night's scoring plays between Starkville High School and DeSoto Central, Gilbert -- a social studies teacher at SHS since 2015 -- launched a career in sports statistics that has seen him compile numbers for at least 10 NFL players, nearly every member of the Clarion Ledger's Dandy Dozen who's played in Mississippi High School Activities Association Class 6A since 2010 and countless other high school prospects who've gone on to prolific collegiate football careers since their days in the yellow and white.

"He's got stats going all the way back to the beginning of time," head coach Chris Jones said of Gilbert. "He's done a lot of digging and a lot of research, and if you've got any question about any record, you just ask him, and he'll know what was going on."

Gilbert has long boasted a passion for sports. As a kid, Mississippi State football games constantly emanated from his radio in nearby Winona. When the Bulldog baseball team made their charge to the 1998 College World Series, he kept scorebooks of every contest -- double-checking each book for accurate batting averages and other stats. He even looked over the stats compiled by the computer while playing the video game Ken Griffey Jr. Presents Major League Baseball after its release in 1994.

"Double-checked the computer's math," he said through a laugh.

Arriving at MSU as an undergraduate in the fall of 2000, Gilbert quickly became a manager for the school's women's tennis team. He stayed in that post for six years before earning a spot as an eighth-grade social studies teacher at Armstrong Middle School in the fall of 2009.

With his ensuing dash through the rain during that year's first region game against DeSoto Central, he helped the SHS coaching staff keep stats by hand the rest of the year and took over on his own for the season opener against Noxubee County in 2010. He's since added positions on stat crews at East Mississippi Community College and MSU during Thursdays and Saturdays in the fall.

"Growing up in Winona, we were not very good at football outside of my freshman year," Gilbert said. "So you'd always go home and watch the highlights every Friday night, and being someone that's born and raised Mississippi State, you always watched Starkville High School highlights, and you always wanted them to do well. So getting to work here has been a dream."

Part of the game

Now entering his 12th year running stats at Starkville, Gilbert is a walking encyclopedia of Yellow Jacket football knowledge. Within seconds of a text pinging across his screen, he can recount the school-record 3,412 yards quarterback Brady Davis accrued during the 2014 season or explain the debate as to whether David Fair or Joe Carter, who went on to careers at MSU and Alabama, respectively, is the best running back in school history.

He's also compiled scores of Starkville games dating back to 1924. As part of his work, MaxPreps named the Yellow Jackets the winningest program in the history of Mississippi football in July with a reported record of 719-262-26 -- though Gilbert contends his count is closer to 737 wins.

"I'm missing a few (games) from the '30s," he concedes. "During the Depression, I don't think we were printing the newspaper here in town."

Now utilizing StatBroadcast -- a system used by more than 275 colleges and universities, 37 athletic conferences and all 42 bowl games -- Gilbert's job has simplified from the early days of his tenure spent calling newspapers around the area to report Starkville scores.

He recalled being hung up on by one area newspaper after he notified them of Starkville's surprising 21-20 win over West Point on Sept. 10, 2010.

Undeterred, Gilbert rang the newsroom again, much to the surprise of the sports clerk on the other end of the line.

"You're the second person to call in," they said.

"No I'm not," Gilbert retorted as his score was reluctantly accepted. "I'm the same person."

Beyond the intricacies of statistics and film clipping that Gilbert has added to his responsibilities, he remains an educator at heart. Since joining SHS's staff, he's enlisted the help of current students interested in sports statistics or film to shoot games and keep stats on Friday nights.

Class of 2020 graduate David Coblentz, who aided Gilbert all four years he attended SHS, currently works as a student videographer for MSU's football team. Admittedly a touch overwhelmed by all the moving pieces and numerous staffers involved at the Southeastern Conference level, Coblentz added that his past experience shooting games under Gilbert's watch gave him a certain comfort in starting his new post.

"It was definitely an eye-opener," he said of his time at Starkville. "I definitely realized 'Yeah, I'm a big part of the program going out there every day with them.'"

Gilbert is currently in a holding pattern given the ongoing COVID-19 pandemic and the persistent question as to whether football will even be played this fall. Despite that, the past decade-plus advancing Starkville's scorebook has given him fresh perspective on the crucial role he carries on Friday nights at Yellow Jacket Stadium and beyond.

"You just kind of realize how fortunate you are to be here with this system, with a football program that is what it is in the state of Mississippi, with the district being supportive of it (and) the community where you can get that type of technology," he said.

4. Confederate monument relocation could get OK from MDAH by end of month COLUMBUS & LOWNDES COUNTY