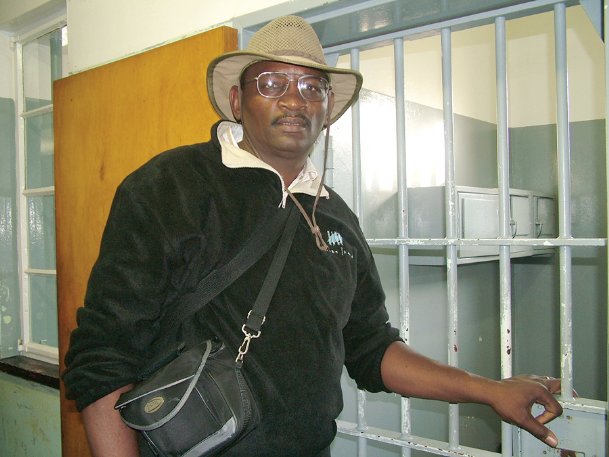 Dr. Paul Veal visits the cell where Nelson Mandela was once imprisoned in South Africa. Veal, along with his friends Wil Colom and Dennis Irby, made several trips to Africa over the years. Veal died Thursday of complications from COVID-19. Photo by: Courtesy photo/Wil Colom 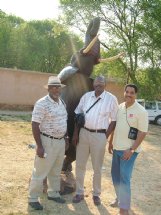 Dr. Paul Veal, center, Dennis Irby, left, and Wil Colom made several trips to Africa during their friendship. Aside from fishing, traveling was Veal's favorite diversion. Veal died Thursday at age 63 from complications of COVID-19.
Photo by: Courtesy photo/Wil Colom 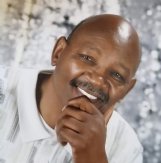 Dr. Paul Veal was a big man in every sense of the word.

At 6-foot-6, with "hands as big as hubcaps," as one friend put it, Veal's imposing presence was allayed by a gentleness, a boundless optimism and a sweetness of spirit that endeared him to everyone he met, including the countless number of patients he saw during his 34 years as a chiropractor, where patients often became friends.

"I would go in for my back, but leave his office inspired and encouraged," said Jabari Edwards, who first met Veal when he was a high school teammate of Veal's son, Chico, at Caldwell High School in the late 1980s. "You walked into his office and he'd smile and say, 'Hey, Kemosabe! It's a great day to be alive. Now, how can I help you?' I never met anyone as positive as Dr. Veal."

Veal, 63, died Thursday from what his wife of 40 years, Dianne Veal, believes were complications from COVID-19.

"He got sick the first of July and went into the hospital on July 12 with COVID," she said. "He had cycled through it, but he had problems with his lungs -- pneumonia in both lungs -- and had problems breathing. I consider him to be a COVID victim. He had always been in good health before."

As word of Veal's death began to circulate Friday morning, colleagues, patients and friends struggled to restrain their grief as they talked about a big man who leaves behind an even bigger void.

"I'm in a state of shock, just heartbroken," said Dr. Susie Johnson of Chiropractic Health Center in Columbus. "I've been in practice for 23 years, but I knew Dr. Paul even before that through my father, who was also a chiropractor. He was a big old teddy bear, big and soft and sweet and nice."

Dr. David Allen, of Allen Chiropractic in Starkville, met Veal in 1995, and the two often referred patients to each other.

"He was a very good chiropractor and helped thousands of people," Allen added. "He was very well thought of among chiropractors."

That was true of Wil Colom, who met Veal when the two men's kids were playing high school sports. Colom later became a patient and has been a friend that has spanned more than 30 years.

"Paul was the kind of person I always wanted to be," the Columbus attorney said. "He had a rare combination of persistence and patience. He would see things through, no matter what. But in all the time I knew him, I was amazed at his patience. I've never seen him raise his voice, never saw him angry.

Although he may have towered over others, Veal never used his physical stature or standing in the community to get his way, said Craig Morris, the Veals' pastor at Abundant Life Church.

"He didn't throw his weight around," Morris said. "He had another kind of weight: the weight of character. That was what drew people to him. He didn't push people to get his way. People were drawn to him. He wasn't a casual church member. To me, he was a mentor and an inspiration. He was family."

That Veal would succumb to COVID-19 is a sobering reminder of the dangers of the virus. Unlike many of the virus victims, Veal was in good health and was physically fit, playing basketball well into his 50s, often against much younger men.

"I personally remember him playing for our community basketball I coached in (2015 and 2016)," Mayor Robert Smith said in a statement. "The name of our team was the Possum Town Trotters and the proceeds from our games benefited the American Cancer Society. He had a giant personality and never sought the spotlight, but found joy in serving this community. As for me, I'll miss his friendship and support and the city of Columbus will miss the professional service that he gave with a personal touch."

Veal and Colom bonded over the hardships both men encountered growing up in rural Mississippi -- Colom in Tippah County, Veal in Tunica County.

"I'd ask him how it was going and he'd laugh and say, 'I kin to kint,' and I knew what that meant as a country boy - working from 'can' see to 'can't' see," Colom said. "He really grew up in some terrible conditions, in an era where nothing was promised to him and there were nothing but obstacles in his way. A lot of people can't overcome that, but he never let his circumstances beat him down."

Another friend, Dennis Irby, said Veal told him he was so poor that when he and Dianne were married in 1979, he didn't have the fee to pay the pastor for the ceremony.

"He told the pastor that if he ever got in a better position, he'd come back and pay him," Irby said. "The pastor said not to worry about it. Paul never forgot it, though. Years later, he looked up the pastor and found out he was in the Atlanta area. So Paul and Dianne drove over to his house. The pastor didn't remember him, but Paul told him about how he couldn't pay him. He paid the pastor the fee and a lot more.

"When he told me that story, it just struck me that it was just like Paul," he added. "He was a man of his word. If he told you something, he would follow through."

A traveler and fisherman

Veal's escape from the crippling poverty came through joining the military, said Dianne, who first met Paul when they were second grade.

"He was in the Air Force and when he got out, he applied for pharmacy school at Ole Miss," she said. "But he met a chiropractor and decided that was something he wanted to pursue."

After his chiropractor training, the Veals moved to Columbus in 1986, taking over a practice on Gardner Boulevard.

"He had these big hands, but he put them on you softly," Colom said.

"South Africa, Tanzania, Ethiopia. Senegal," Colom said, ticking off the places the three men visited. "The most moving moment was looking through the Gate of No Return, which is where slaves saw their last view of Africa as they were put on the slave ships across the Atlantic. For the past several years, Paul was always talking about retiring. I asked him what he wanted to do and he'd say he wanted to travel. Travel and fish."

Most interests took a back seat to fishing, Colom said.

"He'd been down in the creek and the bugs would be swarming, snakes everywhere and he wouldn't budge if the fishing was good," Colom said. "I was chatting with Dianne one time and she said, 'You know I don't worry about Paul leaving me for another woman; I worry about him leaving me to fish.'"

That exaggeration was obvious, Colom said.

"I doubt you'll ever meet a closer, more beautiful couple," Colom said. "Every time you saw them together, it was obvious how much they loved each other. He loved Dianne, loved his kids and loved his friends. We'll all miss him. I think the whole community will miss him. He really was a gentle giant."