Leach: SEC hasn't decided 'whether it's the dog or the vehicle' on playing 2020 football season 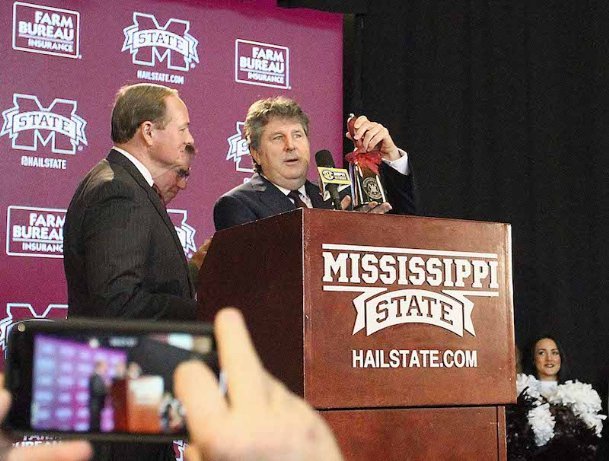 If first-year Mississippi State head coach Mike Leach has his way, the Southeastern Conference will play football this year.

As reports surfaced Monday morning that the Big Ten is close to canceling its fall season, Leach told members of the Starkville Rotary Club he's hopeful the SEC and coaches around the league would be in favor of playing this fall.

"Right now college football hasn't quite figured out if they're the dog or the vehicle and whether they're going to stay," he said. "I wish there was more clarity to that. We're all waiting to see, and we're excited about our team, we're excited about this opportunity and hope we get the chance to share it with everybody around the country."

Citing how British Premier League soccer has thrived throughout the COVID-19 pandemic, Leach argued that others have been able to weather the storm while still playing sports. He also said he'd want science to back up any decisions that are made in canceling a potential fall season.

"I mean, I think I'm probably not supposed to say anything, but I'm not a big fan of it," Leach said of the Big Ten's impending decision. "If we are going to cancel I think we need to make sure the science holds it up, and if you look at the British Premier Soccer League, who's been happily playing all along, I'm not sure that it does."

While Leach's words are sure to garner attention, the landscape of college football has shifted by the minute over the past days and weeks.

Late Sunday night, some of college football's brightest stars, including Clemson's Trevor Lawrence and Ohio State's Justin Fields, tweeted out a graphic calling for, among a slew of other demands, a college football players union. The movement, which has been promoted under the hashtag 'WeWantToPlay,' reached the top of the trending charts in the United States on Twitter.

Starkville Mayor Lynn Spruill also chimed in on impending decisions by college football's power brokers Monday, offering her thoughts on the economic impact a canceled football season would have locally. She told The Dispatch the city is projecting a loss of between $800,000 and $1.1 million should college sports not occur. In preparation for this, city leaders are proposing a 2-mill increase in the local property tax rate -- a measure that is expected to be brought up in meetings this week.

"We have to be extremely conservative about how we plan on budgeting this coming year in case everything goes south on us in such a way that we can't recoup and make our budget work," Spruill said.

According to Sports Illustrated's Ross Dellenger, SEC presidents were set to meet Monday regarding the future of the 2020 season, though a vote was not expected. Other conference commissioners, presidents and athletic directors from the Big 12, Pac-12, ACC and Big Ten were also slated to meet at varying times on Monday or in the coming days.

SEC Commissioner Greg Sankey broke his silence on the current climate of college football Monday afternoon. Sankey, who has remained relatively steady and deliberate in his decisions thus far, tweeted, "Can we play, I don't know. We haven't stopped trying. We support, educate and care for student-athletes every day, and will continue to do so...every day."

In Starkville, MSU Athletic Director John Cohen offered his support for the players' movement via Twitter, writing, "Love the passion, perseverance and resilience shown by all of our student-athletes, especially during these ever-changing circumstances. We will continue fully supporting our student-athletes, coaches and staff, while keeping their health and safety our highest priority."

At present, SEC training camps are slated to begin just a week from Monday, while the first games of the season are set to be played Sept. 26. If Leach, his players and numerous administrators around the country have their way, kickoff will remain on schedule.

"It turns out as of today, (playing this fall is) still up for debate," Leach said. "And with the shifting around to some of the other conferences, it's my hope that the SEC holds strong and we still get to play."