A journey back to the baseball field: For New Hope's Jeremiah Jethroe, scary neck injury changed life in an instant 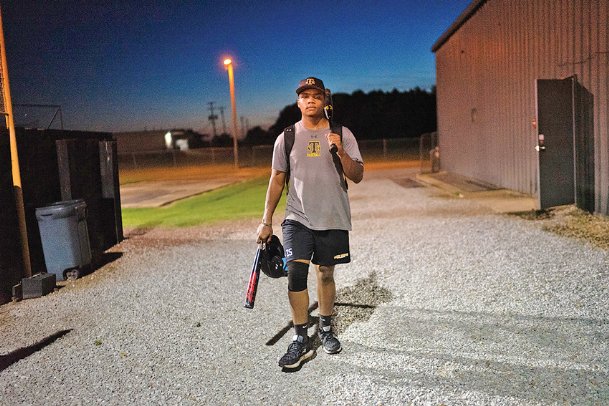 Jeremiah Jethroe walks to his car after his second-to-last baseball practice on July 16 at New Hope High School. Jeremiah, who is going into his senior year, was unable to play last season after breaking his neck more than five months ago in a "freak accident" after practice. "I just want a normal senior year," he said. "I'm hoping I can get a senior baseball season." Photo by: Antranik Tavitian/Dispatch Staff

LEFT: Jeremiah Jethroe poses for a portrait on Friday in Columbus. He broke his second cervical vertebra in what's known as a "hangman's fracture" on Feb. 20. It had rained, and he and his team were transporting a 20-foot pipe, which was being used to roll up a protective tarp for the baseball field. The pipe slid and hit Jeremiah, breaking his neck. Jeremiah, an avid weightlifter, said his size and muscle helped prevent more serious damage. More than five months after his injury, the only visible sign of the accident is a scar on his neck. RIGHT: Jeremiah Jethroe shows an X-ray of a metal plate screwed between vertebrae in his neck. The titanium plate was attached with four metal screws during an April 6 surgery.
Photo by: Photos by Antranik Tavitian/Dispatch Staff

Editor's note: This is the first installment of a three-part series on New Hope athlete Jeremiah Jethroe. The second part of the series will run in Friday's edition, while the final installment will run in Sunday's paper.

Tall and broad, Jeremiah Jethroe slings the baseball with ease as the evening shadows start their slow descent onto the field.

On July 16, he stands along the left-field line and plays catch with teammate Tucker Boyett to kick off the New Hope High School baseball team's second-to-last practice of the summer.

Up and down the foul line, a dozen pairs of Trojans mirror their actions. New Hope players smile and crack jokes and get loose for the workout to come. For a moment, things appear normal.

But they're not. Not anymore.

More than five months ago, in a spot in left center field not far beyond where Boyett stands as the duo plays long toss, Jeremiah suffered a freak injury that ended the athletic first baseman's junior season before it began, put him and his family through a lengthy and painful recovery process and even made him question whether he'd ever play baseball again.

But now, Jeremiah is back on the field, the smile on his face hiding the scar below his chin.

"If you'd have walked out here and I told you that kid broke his neck," New Hope head coach Lee Boyd said, "you'd have never known."

While those two allegiances seem contradictory, Jeremiah -- a self-described "workout-aholic" -- compensates for the calories with an unmatched dedication to his health and his exercise routine.

He's staved off soda since December of his freshman year, subsisting on water, juice and Gatorade. He even once talked his mother, Michelle Jethroe, out of making a 7-Up cake for him.

Before the COVID-19 pandemic hit, he'd visit the New Hope YMCA three times a week for an hour and a half to two hours at a time, working his whole body and lifting weights.

And as soon as he started driving, he took his red 2003 Camry to Trojan Field whenever he could, hitting baseballs and playing wall ball against the backstop to practice his picks at first base. He'd stay until a coach came to kick him out.

Boyd said Jeremiah is one of the hardest workers on the team, typically arriving early at the team's field house and waiting for a coach to come and unlock the door. That dedication was set to earn Jeremiah regular playing time on the Trojans' junior varsity team in 2020, with the opportunity to join the varsity squad on occasion this spring.

But two days before New Hope was set to open its season at home against Gordo (Alabama) and Starkville, something happened that not even the hardworking Jeremiah could have prepared for.

'It just really scared me'

It was cold, windy and wet on Feb. 20, and Trojan Field lay under a protective tarp following heavy rain.

At practice that afternoon, Boyd asked his players to transfer the tarp from the team's large culvert pipe to a smaller one that lay on the infield, then carry the larger pipe off the field. The bigger pipe was more than 20 feet long and weighed more than a thousand pounds, so two dozen Trojans grabbed it and began to march toward the outfield gate.

Jeremiah was in the front, unsuspecting, when several players began to slip on the wet grass, and the pipe slid from their hands. It came down on the back of his neck, making a cracking sound, before bouncing on the grass and rolling away.

Somehow, the impact didn't hurt, Jeremiah said, but as a habitual watcher of workout injury videos, he initially feared he'd been paralyzed, even though his legs were moving.

"It just really scared me," he said.

From the left field line, Boyd and his fellow coaches watched Jeremiah go down, falling on his back.

Initially, knowing Jeremiah's reputation for being a jokester, Boyd thought nothing was wrong.

"If I'd have had a different kid that may have fallen out there and was in pain like that, my first reaction would probably have been, 'Hey, this kid's hurt,'" Boyd said. "JJ just keeps the mood light. You just thought, 'Oh, he's playing. He's just joking.'"

Boyd approached Jeremiah, telling him, "Come on, buddy, get up." The fearful player looked back at him.

"When I bent down and talked to him," Boyd said, "that's when I knew."

Ten years ago, when a player pulled his hip out of his socket while taking a swing in a game, was the only time Boyd ever remembered having an ambulance on Trojan Field.

Now, with Jeremiah lying immobile on the grass, he had to do it again.

Assistant coach Jared Garrett called 911, and an ambulance was summoned from Baptist Memorial Hospital-Golden Triangle in Columbus. It only took 10 or 12 minutes, but as he lay in a puddle of icy water, Jeremiah waited for what felt like an eternity. Players ran to the field house to fetch their hoodies and blankets, piling them on their fallen teammate to warm him up as the ambulance raced south.

When the ambulance arrived, pulling up behind the scoreboard in left field, the wheels of its mobile gurney spun on the slick outfield grass as EMTs made a beeline for Jeremiah. He was lifted onto the bed and given a few minutes to warm up before being driven away.

With thoughts of practice abandoned, the Trojans piled into their own cars and drove to Baptist to see their teammate. When they were allowed -- a few at a time -- back to the emergency room bed, Jeremiah was in good spirits.

"We were really thinking, 'Man, maybe this is just a scare,'" Boyd said.

But they were wrong.

As Jeremiah lay motionless on the waterlogged grass, his mom's iPhone lit up with his name.

On the other end, New Hope assistant coach Tyler Neal identified himself. Immediately, Michelle knew something was up.

"He started talking, but I wasn't grasping," she admitted.

After saying a prayer, Michelle -- away from Mississippi at the time -- called Jeremiah's father, Ronald Jethroe, who rushed to the field before the ambulance arrived.

Riding with Jeremiah to the hospital, Ronald turned on speakerphone so Michelle could hear her son, who was cheery and joking. She prayed for something light: a bruise, maybe.

The ambulance unloaded its cargo at Baptist, placing Jeremiah on his back in an open bed. He underwent several scans, including an X-ray.

After a while, Michelle heard -- again via speakerphone -- Jeremiah's diagnosis: a break in the second cervical (neck) vertebra, known as C2. The injury, which typically occurs when the head and neck snap forward or backward suddenly, is commonly known as a "hangman's fracture."

Perhaps the name was a premonition of what would come next: the sudden upheaval of the Jethroes' lives; the test Jeremiah suddenly had to face.

"He was healthy. He had worked to get where he was. He had progressed majorly," Michelle said. "And then, boom, just in the blink of an eye, just that fast, our whole life changed."