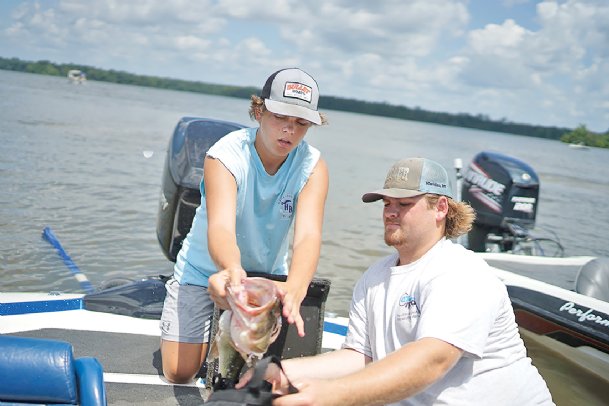 David Dupler, left, and his fishing partner, Brandon Bell, load a smallmouth bass that they caught during a fishing competition on Saturday at Columbus Lake. Dupler, a New Hope native, caught his first fish when he was 4 and has been fishing competitively for the last two years. Photo by: Antranik Tavitian/Dispatch Staff

On Friday afternoon at Performance Marine on Gardner Boulevard, David Wesley Dupler answers the phone at the front desk, while his mother, Michelle, helps a walk-in customer.

Dusty Dupler, David's father, is hidden away working in the back of the store, occasionally walking to the front to speak friendly with customers he seems to have known for decades.

Business has picked up at the Columbus boat dealership of late, with the COVID-19 pandemic drawing more money and attention to the safe, socially distanced, "Great Outdoors." So the Duplers, whose family has operated Performance Marine since its founding in the early 1990s, have been glad to have an extra hand from 14-year-old David.

David obliges gracefully, helping with whatever he's asked. But there's somewhere else he'd rather be. And whatever time it is, there's a good chance he's less than 24 hours from being there again.

"He would live on his boat if I let him," Michelle said.

Indeed, David is, at heart, a fisherman -- and a good one, too, if competition weigh-ins are any indicator.

During the summer -- whether for a local competition or just for fun -- most of the New Hope High School freshman's days begin with a 4 a.m. (or earlier) alarm and a boat in a body of water by 5 or 5:30. Sometimes, it's his favorite Pickwick Lake on the Tennessee River. On Saturday, it was Columbus Lake, where he caught a six-pound bass. Still other times, it's lakes or rivers all over North Mississippi and West Alabama, all for one simple fix David can't get enough of: "setting a hook and something pulling back."

"He'll be exhausted by the end of the day," Michelle said of David's mid-afternoon returns from fishing. "It's like he's been playing in the NFL."

Fishing is in David's DNA. His grandfather, Will Dupler, is a Fishing League Worldwide record holder for a weighed five-fish limit, and Dusty dabbled for about a year among the professional ranks in the early 2000s until he said he "ran out of money and talent and went back to work."

But David "was pretty much born with a fishing rod in his hand," his father said. By age 3, he would cast and reel in the grass in his yard for hours. He caught his first fish about age 4, when his father and grandfather helped him land a catfish that bit his spinner bait in the Ross Barnett Reservoir. Looking at old photos, David estimates the fish -- which at the time scared him because he thought it was an actual "monster" -- weighed 15, maybe 20 pounds. Michelle says it weighed closer to 30.

Fishing 'in his blood'

About two years ago, David started fishing competitively, mostly taking in local "fruit jar" tournaments where fishermen pay $25 or so to enter and the top 5 weigh-ins earn payouts from the pot. He's finished in the money several times, even winning a few outright.

Last year, he and teammate Dawson Jaynes, 17, of Ethelsville, Alabama, competed in the Upper Tombigbee Student Angler Trail and earned enough points to qualify for the Student Angler Federation High School National Championship and World Finals in June at La Crosse, Wisconsin -- David's first multiple day tournament that saw him on the water for 24 hours over three days.

The two-man team fared pretty well for first-timers, finishing in the top half of the pack among 312 teams in the two-day nationals and in the top 50 in the world finals on the third day with a three-fish bass weigh-in of 7 pounds, 12 ounces.

"It was as many boats as I've ever seen on the water at one time," David said. "It was way more serious, but honestly when the blast off happens and you're starting to fish, it's pretty much like fishing for fun."

He will team up with Hamilton senior Houston Vaiden to try to qualify next year for the big tournament. To one day win it, David will have to rely on a skill he continues to hone: Knowing the fish and looking at the situation from its perspective.

"When you're fishing competitively, it's between you and the fish, not between you and the other guy," David said. "It's about learning what the fish wants and how it will respond. Say it's a hot summer day like this one, and we're both fishing for bass with a worm right beside each other. Say you're reeling the worm in and bumping it every once in a while, and I let it sit for a while and not move it. I'm (more likely) to catch a fish because think about it: If you're hot and sweating, do you want to chase after something or do you want to sit there, do nothing and let it come to you?"

On the prospect of one day becoming a successful professional fisherman, David tries to keep his ambition in check.

"It's something I would like to do, but slim chances," he said.

Dusty thinks his son's chances may be a bit better.

"Once it gets in your blood, it's there," Dusty said. "He's got a lot of God-given talent that I didn't have. I didn't have my father's (Will's) natural ability. But David does."