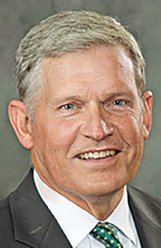 Stan Murray's fall Friday nights over the past 33 years are nearly identical.

Murray, a former Mississippi State football player and veteran Southeastern Conference football official, gathers with his officiating crew, orders pizza from whatever college town his gray Ford F-150 pickup has carried him to that weekend and gathers the group around a table to prepare for the following day's game.

But that's set to change.

After enduring an on-site COVID-19 test, referees head straight to their hotel rooms this year. Their weekly meetings are now to be held over Zoom, rather than in person. The SEC has also suggested officials refrain from group dinners.

"COVID-19 has affected everything and will continue to do that," Murray told Columbus Exchange Club members Thursday at Lion Hills Center.

In nearly 40 years as a high school and college football official, the Columbus native has seen plenty of changes to the game and in protocol. But the ongoing pandemic is a new notch on his belt of experiences.

Each year, Murray and his coworkers, the bulk of whom balance a full-time job during the week with their Saturday officiating responsibilities, are required to take a written test ahead of the season. This fall, that test was administered virtually.

"What (they) wanted us to do is set up your iPad, turn the camera on, and you're going to be on camera taking your test, so you're not going to be emailing your buddy like, 'What was the answer to No. 3?'" Murray said as a chorus of laughs ensued.

Murray, who is entering his fifth year working in the replay booth after 29 seasons as a back judge, and his compatriots will also be subjected to regular COVID-19 testing during the week. Officials must self-administer a test each Tuesday that is sent to a lab for screening, followed by another test on Fridays upon arriving at their game site for the week. Should a scheduled official test positive prior to their assignment, the SEC has others on call to fill the slot if need be.

Other COVID-19-related requirements include neck gaiters and face coverings for all officials. Crammed into a small section of the press box at most every SEC stadium, Murray is joined by three other referees in the limited space.

Should a play come under scrutiny on the field, he and his team are expected to overturn the call, confirm it or stick with the original ruling if not enough evidence arises to merit a change. Murray said his group averaged a decision every minute and 18 seconds -- well below the newly instituted two-minute window the SEC is aiming for their replay booth officials to hit in determining a call.

"If you've gone two minutes, and you haven't found something that's clear and obvious ... if you change it you're likely to make a mistake," former NFL Vice President of Officiating Dean Blandino told Murray.

Beyond COVID-19 protocols, there will be on-field changes, too. Players who are dinged with targeting penalties are no longer required to vacate the sidelines and be accompanied to the locker room. Instead, they'll be allowed to remain on the sidelines.

Murray also noted games now come under the refereeing crew's jurisdiction 90 minutes prior to kickoff as opposed to the 60-minute window during previous years, while players who enter the playing surface for warmups are newly required to have their numbers visible.

Slated to work Texas A&M's season opener against Vanderbilt in College Station next Saturday night, Murray is familiar with the route. From his home in the Golden Triangle to Kyle Field, it's 603 miles through Mississippi, across Louisiana and down into Texas. And though the drive is recognizable, this year's college football season marred by COVID-19 restrictions and limited fan attendance is anything but.

"When you've got eight guys and your job is to get it right, you've got 100,000 people plus TV and replay looking at you, we're very accountable to each other to do our job and to be ready and to be prepared," Murray said. "We're a team. There's not many people that are on our side. We've got to do our job and not let our other officials down."