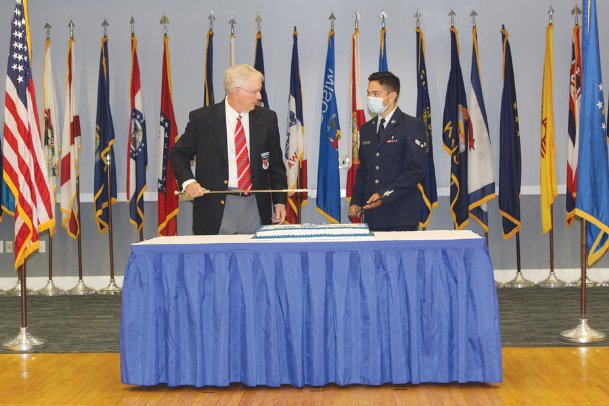 Retired Lt. Col. Gene Smith and Airman First Class Juancarlo Nava, the youngest airman at Columbus Air Force Base, cut a birthday cake with ceremonial swords, an annual tradition, on Friday at the Columbus Club on base. The event, where Smith spoke about his time as a prisoner of war in Vietnam from October 1967 to March 1973, was in honor of the Air Force's 73rd birthday as well as in memory of POWs and missing in action service members. Photo by: Isabelle Altman/Dispatch Staff 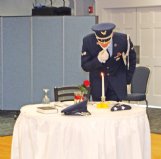 Airman First Class Alexander Patterson blows out a candle during a ceremony remembering troops who were held as prisoners of war or missing in action, at the Columbus Club on Columbus Air Force Base Friday.
Photo by: Isabelle Altman/Dispatch Staff

Col. David Fazenbaker speaks with retired Lt. Col. Gene Smith during a celebration of the Air Force's 73rd birthday at Columbus Club on Columbus Air Force Base Friday. During the event, which also recognized military service members who were held as prisoners of war or missing in action, Smith talked about the five years he spent as a POW during the Vietnam War and encouraged his audience to never stop serving their communities.
Photo by: Isabelle Altman/Dispatch Staff

Gene Smith had just released two bombs in the sky over North Vietnam on Oct. 25, 1967, and was pulling out of a dive in his F-105 Thunderchief aircraft when the plane was hit by enemy fire.

"It sounded like you had your head in a washtub when somebody hit it on the side," he told a small but rapt audience at the Columbus Club on Columbus Air Force Base Friday.

The plane "tumbled" as Smith fumbled for the ejection seat.

He ejected from the airplane and parachuted over Hanoi, knowing the North Vietnamese would be "really delighted to see me" given he and his fellow airmen had just dropped 32 3,000-pound bombs on the Paul-Doumer Bridge (now called the Long Bien Bridge). When he hit the ground, North Vietnamese soldiers shot him twice in the thigh and took him prisoner.

It was the beginning of more than five and a half years Smith spent as a prisoner of war. It would be 1,967 days before he was released as part of Operation Homecoming and returned to the United States.

Smith, who retired as a lieutenant colonel in the 1970s, told his story as part of a ceremony for the 73rd anniversary of the Air Force. Traditionally, said Col. David Fazenbaker of CAFB, who introduced Smith at the event, bases around the country hold parties where the youngest airman on base and a "more experienced" airman use ceremonial swords to cut a birthday cake. This year, Smith got the honor, along with Airman First Class Juancarlo Nava.

But it was also an opportunity to remember service members from the Air Force and other military branches held as prisoners of war or missing in action, Fazenbaker said. The event included a somber ceremony during which Airman First Class Alexander Patterson lit a candle in honor of POW/MIAs and saluted them.

"We owe a debt of gratitude to you and the other POWs and the MIA who are out there that we will never be able to repay," Fazenbaker said to Smith.

A Delta native, Smith grew up in Tunica and attended Mississippi State University, where he was in the Reserve Officers Training Corps before attending flight school. In 1966, he was sent to south Asia and assigned to the F-105s. The night he was captured was his 33rd mission.

"To say that our hearts were beating fast on that one would be an understatement," he said. "Because as we briefed and took off that day, you looked around and wondered which one was not going to make it back."

During the five years he spent as a prisoner, he and the other POWs would communicate through a tap code introduced to the prisons by Smith's friend Col. Carlyle "Smitty" Harris, who was captured in 1965.

In demonstration, Smith rapped on the podium where he was speaking -- two taps, then three, then two again, then four.

"We got to where we were really fast with it," he said.

Harris, who now lives in Tupelo, recently published a book on the code and his time as prisoner of war, which is called "Tap Code." Smith said it's one of the best books he's read on the subject.

The tap code saved a lot of lives during what was a harrowing experience for the American POWs, Smith said.

He said he came out with a "great appreciation" for his country, for the other POWs and for his faith in God, who he said he had taken for granted before that.

"One of the things I decided when I was in jail, in prison, was I would never sit on the sidelines again," he said.

Smith was released on March 14, 1973, and was reunited shortly thereafter with his wife Lynn and his three children, none of whom he had seen in longer than six years. He later got a job at Air Training Command at the base in Columbus.

"What was really fun was coming to work at 5 o'clock in the morning ... and being able to be a part of watching those captains and lieutenants teach those other lieutenants how to fly a T-38," he said.

He also kept the promise he made to himself while he was in prison to be involved in his country and his community. He votes in every election, whether local or national, he said. He's involved in his church and has been part of myriad civic and charitable organizations, including the Air Force Association.

"You should never quit participating and serving," he said. "Never should you do that, whether it's in your military, your Air Force career, whether it's your city, whether it's your state or it's your nation. If you tell yourself, 'I can't do it, I'm not qualified,' then you won't. But if you keep working at it, you can."