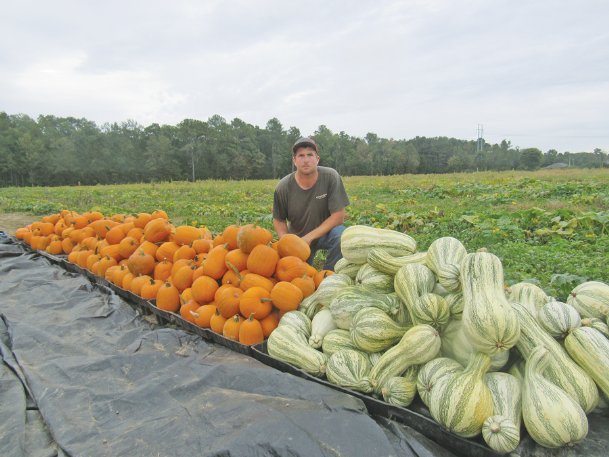 Will Darnell will open his pumpkin patch in Caledonia on Oct. 3, marking a return of a pumpkin patch to the area after a one-year hiatus. Darnell decided to grow pumpkins after Dwight and Jean Colson, whose "Country Pumpkins" patch was part of the town's fall tradition for almost 20 years, decided to cease pumpkin production in 2018. Darnell said if the public supports his patch he has plans to expand his patch next year. Photo by: Slim Smith/Dispatch Staff

In Caledonia, 2019 was known as "the year without a pumpkin patch," something the town had not experienced in almost two decades.

It was no trivial matter in the community.

"People really came to expect it," Jean Colson said. "Going to the pumpkins patch was just a part of the season."

That wasn't lost on Caledonia farmer Will Darnell.

On Oct. 3, a week later than originally planned, Darnell will open his first pumpkin patch at one of his fields on Wolfe Road. In addition to the pumpkins for sale, his patch will feature a corn maze, a snow-cone vendor "and a few other little things," Darnell said.

No one is happier to see the return of a pumpkin patch than Jean Colson and her husband, Dwight, who operated "Country Pumpkins" on their property on Spruill Road for almost 20 years before ending pumpkin production in 2018.

"We still get calls about when we're going to open," she said. "I got two calls yesterday. A lot of people were disappointed when we closed. Some were even mad about it."

When Darnell decided to bring a pumpkin patch back to the community, he had hoped to do it in a big way, planting eight acres of pumpkins in late June.

But the timing could not have been worse, as it turned out.

"By the first week of June, everything looked great," he said. "Then the drought hit me. The corn should be two feel taller and the pumpkins I have now should be twice the size they are. Some of these pumpkins should be 50 pounds."

It is clearly not the sort of debut Darnell had hope for.

"I hope people don't expect too much," he said. "I promise you, we're going to make this better. But I've got to have the support of the town."

Darnell, who turns 31 today, grew up in a farming family and has been farming himself since he was a teen.

Along the way, he's had the support of veteran farmers, including Dwight Colson. Darnell remembers going to the Colsons' pumpkin patch as a kid. In his late teens, he got the itch to grow pumpkins himself and turned to Colson for support.

"I can't say a bad word about Mr. Dwight," Darnell said. "When I first got started with pumpkins, I called him and asked if he had any seed I could get. He said, 'Sure.' Mr. Dwight is the reason I'm doing this.

"Dwight Colson, Tony Smith and Bobby Egger have always been there for me," he added. "If I ever needed to borrow a piece of equipment or needed advice, they were always there to help."

Now, Darnell is hoping the support he has received from those veteran farmers will extend to the community as a whole.

"If we can get that support, next year we're going to take this whole field (20 acres) out of row crop production and turn it into pumpkins," Darnell said. "It's going to get better, I promise."