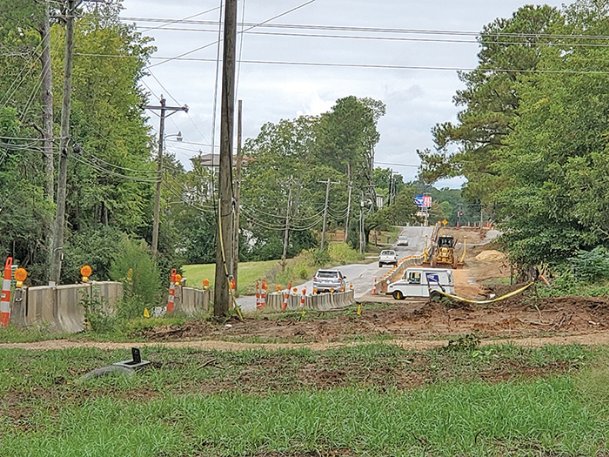 Construction along Blackjack Road started this year after Oktibbeha County obtained the necessary easements after much delay. A Friday vote from the board of supervisors accepted $500,000 in bond money from the state to complete the project, and the board can reallocate county money it previously set aside for it, District 2 Supervisor Orlando Trainer said. Photo by: Tess Vrbin/Dispatch Staff

The long-delayed Blackjack Road repair project will receive its final portion of funding from the state after the Oktibbeha County supervisors unanimously voted to accept $500,000 in general obligation bonds at a special-call meeting Friday.

The rebuilding and expanding a portion of Blackjack Road from Bardwell Street west to Stone Boulevard has been in progress for several years, and the supervisors had planned to direct county funds to the project.

"We had put up some cash to do that, but now we can take that and reallocate it to do some other projects throughout the county," said District 2 Supervisor Orlando Trainer, whose district includes part of the Blackjack Road project area.

The state Legislature passed a bill in July that included the 2020 Oktibbeha County Road Improvement Fund, setting aside $1 million in bonds for construction on West Poor House Road and $500,000 for Blackjack Road.

Work on the long-awaited Blackjack Road project finally started this year after the county received all the necessary easements from Blackjack Road property owners in late 2019. The county resorted to "quick take" legal action, similar to eminent domain, which would allow the county to obtain the needed right-of-way through the courts.

The supervisors unanimously awarded an $8 million contract in February to Columbus-based Burns Dirt Construction to complete the project. Burns was not the lowest bidder, but the supervisors were concerned about a pending lawsuit related to Site Masters Construction, which is based in Alabama but has an office in Clay County.

The county has received bond money for road repairs from the state in the past, including for Longview Road, which are also underway, said county board attorney Rob Roberson, who also represents part of Oktibbeha County in the state House of Representatives.

Construction crews replaced the base of a section of Poor House Road in fall 2019 in order to prepare it for the repaving included in the four-year road repair plan supervisors approved in June. The road is in districts 4 and 5, and District 4 Supervisor Bricklee Miller initially invested her entire allocation of $537,000 in the project. That money is now available for other projects in the district, she said.

Miller said she appreciates that the state bond money does not require taxing Oktibbeha County citizens.

"We're very excited to see this project move forward," she said. "Not only can we look forward to getting the plans very soon from (the county engineer) and bidding them out, but the project will start next year."

She said she also looks forward to the county installing a stoplight at the intersection of Poor House Road and Old Highway 25, the site of recent car accidents that resulted in injuries.