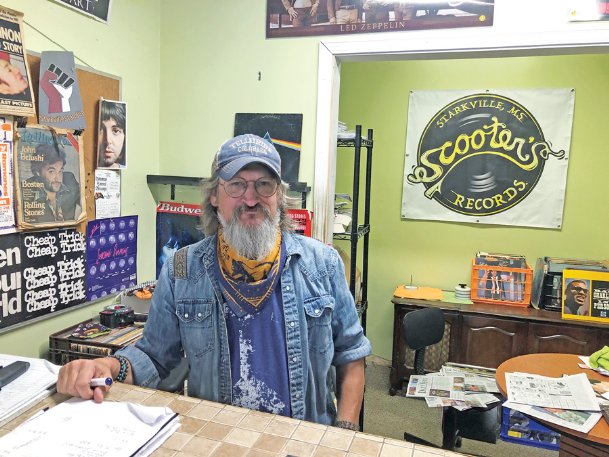 Scott "Scooter" Thomas opened his self-titled record store in 2017. Boasting a collection of over 10,000 vinyls, he noted the COVID-19 pandemic has added some new pieces to the unique and intimate experience of a record store, but customers have continued to flock into his shop. Thomas said this summer has been the best since he opened the store, though he's still at a slight loss on the year after having to temporarily close his doors in the spring due to shelter in place orders. Photo by: Ben Portnoy/Dispatch Staff

Scott "Scooter" Thomas sits behind the register and basks in the vocals of Texas-based bluegrass group The Gourds. The tune, "Lower 48," is part of Thomas' recent kick on Longhorn State bands, though he explains he tries to flip the music playing over the speakers in his store based on the clientele walking in and out.

"If Grandma and her kids are coming in, whenever I see him out the door, I'm probably not going to be playing any heavy metal," he quipped.

With wrists coated in bracelets, beads and metal clasps, Thomas' denim jacket and long graying hair offer him the befitting look of a man who's record store boasts a collection of vinyl that numbers more than 10,000. The store itself, aptly named Scooter's Records, is a passion project of sorts for the Louisville native and Starkville transplant.

In his youth, Thomas' aunt worked at a record store in Hattiesburg -- a shop he'd spend countless hours wandering aisles and navigating boxes among greats like Bowie and Springsteen, Led Zeppelin and The Rolling Stones. He said the first record he ever received was Elton John's "Captain Fantastic and The Brown Dirt Cowboy," while the first album he ever purchased himself was The Kinks' "Greatest Hits!" He bought the latter at a garage sale for a nickel.

"I've still got that record," he notes of his first in a long line of record purchases through the decades.

Since 2017, Thomas has operated Scooter's Records after a 28-year run working as the city's chief water operator.

Like so many other locally-owned vinyl shops around the country, there's an expectation upon entrance at Scooter's. A record store experience is hands on. It requires flipping through stacks of used records in hopes of uncovering a gem or two. It's personal.

In Thomas' shop, within view of the Cotton District and barely a mile away from Mississippi State's campus where he spent time as a student in the mid-to-late 1980s, the walls are coated with rock n' roll memorabilia. A blowup poster of the Clash's hit album "London Calling" covers one entire box filled with records. Iconography of now-deceased Grateful Dead lead guitarist and vocalist Jerry Garcia and singer Janis Joplin also grace the walls.

But there are pieces to the cathartic record store experience that have been added in Thomas' three years operating the store, and, more recently, as the COVID-19 pandemic crippled the country for much of the past six months. A bottle of hand sanitizer greets music-searchers just inside the door. Rubber gloves are offered to anyone that wants them. Thomas himself wears a navy blue and yellow designed bandanna around his nose and mouth.

"It was getting touchy there for like a month and a half," he said.

There have been changes to the experience, sure, but interpersonal touches remain at Scooter's amid less than ideal circumstances. As one patron heads to the register, he and Thomas exchange thoughts on the Frank Zappa album changing hands.

"You know how Frank Zappa would go off on tangents?" Thomas queries.

"Nobody talks about Frank," the customer adds. "I love Frank Zappa. ... He's as good if not better than Hendrix, in my opinion."

Business has remained steady throughout the pandemic at Scooter's. He's the only employee at the moment, though there have been a few college students that have aided his shop in recent years. Following shelter in place orders in late spring, Thomas reopened full-time in May. He said it's the best summer he's had since opening, but he's still at a slight deficit. In the immortal words of David Bowie, Thomas has simply embraced the strange.

"People that buy records in a record store, they're in for the experience of going into a record store," Thomas said. "And so in that respect, I'm really not competing with Amazon.

"All that being said, the store is doing good," he continued. "I'm pretty happy with that -- thank God. You know, (the pandemic) just kind of showed me that even in Starkville, you can't predict anything in Starkville."