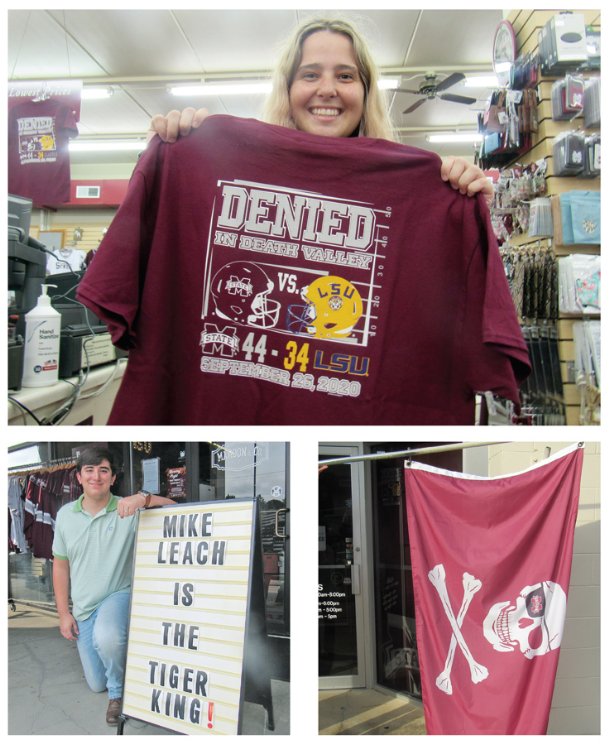 TOP: Campus Bookmart sales associate Cheyenne Tucker shows off one of the few remaining "victory" T-shirts in stock on Monday following the Bulldogs' upset win over LSU Saturday in Mike Leach's debut as MSU's coach. The win created a surge in sales for MSU merchandise, especially pirate-themed items, which is Leach's unofficial brand. LEFT: Maroon and Co. manager Alex Gomez said the Bulldogs' win over the LSU Tigers on Saturday generated 5,000-to-6,000 online sales in the hours immediately following the win. "Mike Leach has saved football and these local businesses, too," he said. RIGHT: After an MSU "Bandwagon" video featuring an MSU "pirate flag" went viral almost as soon as it was dropped Monday morning, demand for the flags quickly overwhelmed retailers. Campus Bookmart sold out its stock of 20 flags in less than two hours Monday and had taken orders for 250 more by the end of the day. The only flag remaining Monday afternoon was the sun-faded flag that flew outside the store entrance. Photo by: Slim Smith/Dispatch Staff 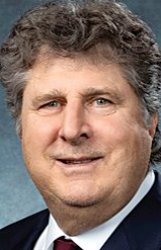 By about 6:30 Saturday evening, what had been low expectations for Mississippi State were suddenly soaring.

And we're not just talking about what happened on the field, where Mississippi State had just finished off a stunning 44-34 victory over sixth-ranked and defending national champion LSU on its own field in Mike Leach's MSU coaching debut.

"I'd definitely say that Mike Leach has saved football and these local businesses, too," said Alex Gomez as he assessed over-the-weekend sales for Maroon & Co., which specializes in MSU-themed merchandise.

"We get notifications on our phones when someone is buying something online," said Gomez, a manager at the store. "As soon as the game was over, it was ca-ching, ca-ching, ca-ching. I think we did roughly 5,000 to 6,000 sales that night alone, way more than double what we normally get after a game."

With COVID-19 casting a shadow over the season -- finally resulting in a 10-game schedule featuring five home games, all limited to 25 percent capacity -- Starkville businesses that cater to Saturday football crowds had prepared for a significant drop in sales at area shops, restaurants and hotels.

And while MSU's conquest over LSU may not help the hotel or restaurant business significantly, it has sent MSU merchandise flying off the shelves, with retailers now struggling to fill online orders as well.

"We're slammed," said Sharon Neal, manager at The Lodge, a longtime favorite shopping stop for all things Bulldogs. "Right now, we're trying to get through all the orders. We have 60 orders we're trying to fill right now."

T-shirts commemorating the win went into production Saturday night and were in stores by Sunday afternoon, but there was a run on all sorts of MSU gear.

"We can't keep anything with a pirate on the shelf, really," Gomez said.

The pirate motiff is the unofficial brand of Leach when he used it as a metaphor for life in his 2011 biography, "Swing Your Sword: Leading the Charge in Football and in Life."

A second wave of pirate-themed MSU gear appears to have been ignited with Saturday's win, thanks to a video produced by MSU released Monday morning.

In that video, Leach, perched atop a wagon adorned with a large pirate flag (with MSU's logo on the eyepatch of the skull-and-crossbones image), says, "Looking for a bandwagon? Hop on."

The video went viral within hours of its Monday morning release, something Cheyenne Tucker, who works as a sales assistant at Campus Bookmart, quickly discovered.

"We had about 20 of those pirate flags in stock," Tucker said. "We would sell maybe one or two a day. It was the craziest thing. We sold what we had in stock in maybe an hour-and-a-half and we've got orders probably 250 more just today. It just came out of nowhere."

"Home games are always really good for us, but with 25 percent capacity (for home game attendance), we knew business wouldn't be like it normally is," Raye said. "We haven't had our first home game yet, so what happened at LSU really was a good boost."