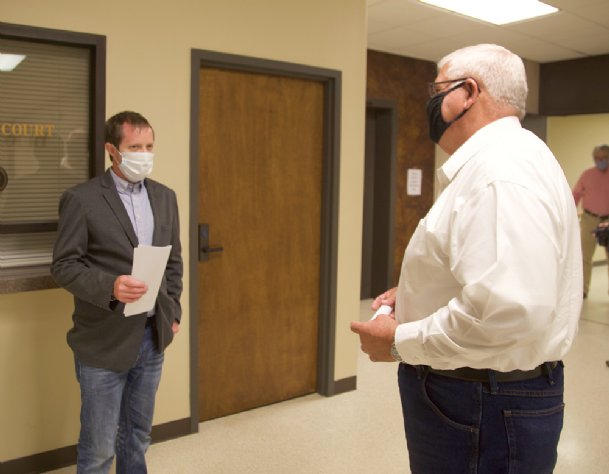 David Chism, left, concedes to Lynn Wright in the House District 37 race outside the Lowndes County Circuit Clerk's Office Tuesday night. "I will be supporting you, I will be praying for you," Chism told Wright. "When I call, I hope you'll answer the phone." Photo by: Yue Stella Yu/Dispatch Staff

Bart Williams takes a congratulatory phone call from a member of Gov. Tate Reeves' staff Tuesday after winning the state Senate District 15 runoff election. Williams owns Security Solutions Inc. in Starkville and waited for the results at the office with his friends and family. He will replace Gary Jackson, of French Camp, who retired from the Senate in June.
Photo by: Tess Vrbin/Dispatch Staff

"I will be supporting you. I will be praying for you," Chism told Wright. "When I call, I hope you'll answer the phone."

Wright, former superintendent of Lowndes County School District, had just prevailed in the race in both Lowndes and Clay counties. Although Chism carried Oktibbeha County, Wright still won the state House race by a landslide, according to incomplete totals obtained by The Dispatch.

Wright defeated Chism 1,544-875, according to unofficial totals. The margin does not include at least 66 absentee votes from Clay County or affidavits from Clay and Lowndes, the total of which will not change the outcome. Those ballots will be counted today.

Upon learning of his victory in Lowndes and Clay, Wright said he appreciates the blessing from God and support from his family, friends and campaign workers. He said he will strive to listen to voters' concerns and meet with community leaders when he begins his job as a House representative beginning in January 2021.

He will fill the unexpired term of Gary Chism, who retired in June. The term will end in 2023.

When he arrives in Jackson, Wright said he will focus on securing more funding for K-12 education and workforce development programs. He will also work on raising teacher salaries, he said, and advocating for roads and bridges repairs.

"We've got to continue to get our students to get prepared for college, but also we've got to teach them workforce skills," Wright said of the importance of education. "Career technology is so important today."

Having just learned of his loss in Lowndes County, David Chism, who said he had been campaigning all day "under the sun," told The Dispatch he was not going to give up yet.

But after learning of the results in Clay, he said it might be clear Wright would be the winner. Although he lost the election, he said he enjoyed the journey.

"I've had fun with this," David said. "It's been an enjoyable experience, but it's also been exhausting."

He said he supports Wright "100 percent."

"Lynn Wright is a rock star," he said. "He's extremely energetic and he's a good man and he's sincere. ... And that resonates with people. They want someone who is real."

Wright nearly earned a majority in the three-person race on Sept. 22, which included Vicky Rose of West Point, who finished third. But Wright finishing with just less than 50 percent forced the runoff.

He described three months of campaigning as "intense, but it's been fun" and said he looks forward to taking his seat in the state Legislature.

"I want to get a good night's sleep, maybe two, and then sit down and transition into this role," he said. "I want to go to Jackson and do what the people of District 15 want me to. It's what they're hiring me to do."

Williams, owner of Security Solutions, will replace Gary Jackson, of French Camp, who retired from the Senate earlier this year due to health reasons. The term will end in 2023.

The Senate district includes parts of Oktibbeha, Webster, Choctaw and Montgomery counties. It is unclear exactly how many affidavits for the district are still to be processed Wednesday, but it will not be enough to change the outcome.

Williams received more than twice the number of votes for Yates in Oktibbeha County: 2,092 to 1,037. This majority withstood Yates outperforming him in her native Webster County, 1,529 to 1,046, and in Montgomery County, where Yates received 232 votes and Williams received 131.

Waiting for the Choctaw County results "was an eternity," since it took more than an hour after the other three counties reported their results, Williams said. He narrowly outpaced Yates with 798 votes to her 722 there.

The initial four-person contest for the open Senate seat on Sept. 22 did not produce a majority vote winner, but Williams and Yates qualified for the runoff with 33.6 percent and 27.9 percent of the vote, respectively. They defeated Oktibbeha County Supervisor Bricklee Miller and Ackerman business owner Levon Murphy Jr.

Yates is the former director of the Health Promotion and Wellness Program for students at Mississippi State University. She told The Dispatch she was "at peace" and fully supports Williams now that the election is over.

"We ran a good race, we enjoyed meeting people and reacquainting with people and I'm at total peace," Yates said. "We wouldn't have done anything different than we did, and I look forward to tomorrow."