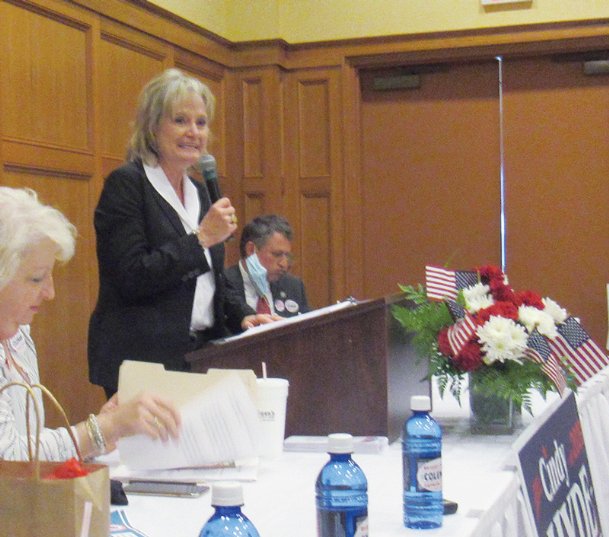 Sen. Cindy Hyde-Smith allowed no political space between her and President Donald Trump during her speech at Tuesday's Lowndes County Republican Women luncheon.

For the second time in two years, Hyde-Smith, a Republican from Brookhaven, will meet Mike Espy, a Democrat from Yazoo City, in a race for the U.S. Senate. Libertarian Jimmy Edwards of Grenada also is on the ballot.

Hyde-Smith claimed a 7-point win over Espy in 2018 to become the state's first elected woman Senator. But in the rematch, polling suggests a much closer race.

Even so, Hyde-Smith spent much of her 20-minute speech praising the record of Trump and her support for it. The website FiveThirtyEight calculated Hyde-Smith's voting support of Trump's positions at 94.5 percent.

Even as Trump's polling numbers decline nationally, Hyde-Smith's support remained enthusiastic in a state where the president remains popular.

Hyde-Smith touted Trump's handling of the economy, his leadership in speeding up progress on a COVID-19 vaccine and his appointments of conservative judges, including Amy Coney Barrett, who is currently facing confirmation hearings in the Senate Judiciary Committee.

"President Trump came in with an America First, pro-growth agenda," Hyde-Smith told her audience. "I have supported President Trump's economic agenda, which in 2019 pushed median incomes to an all-time high and led poverty rates to an all-time low before the pandemic. This man knows how to lead us through economic uncertainty. He's proven that over and over again."

According to the Economic Policy Institute, household income in 1999 was higher than in 2018.

Despite the pandemic, Hyde-Smith said the nation is well on the way to economic recovery, thanks to Trump's leadership.

"We have a lot of evidence that we are going in the right direction," Hyde-Smith said. "Over the past four months, more than 10 million jobs were added back to our economy. The 7.9 percent jobless rate is just not acceptable, but it's half of the predictions that we thought it would be."

In April, the Congressional Budget Office projected the unemployment rate for the second quarter to be 14 percent.

For her part, Hyde-Smith said she is proud of her achievements since being appointed to the Senate to fill Thad Cochran's unexpired term in March 2018. She won a special election to the post later that year.

"There's a lot of drama in Washington these days," Hyde-Smith said. "But here's the deal: I just don't get caught up in the everyday Capitol Hill drama. ... I'm focused completely on my work for you. As a result we've achieved some very big things for Mississippi. A lot of folks will tell you that getting a bill through Congress won't happen right away. They'll say, 'You senators have to bide their time,' but that's just not how I operate.'"

According to Govtrack.us, Hyde-Smith has been the primary sponsor of two bills that have been enacted into law since her arrival.

She said she is continuing to push for a balanced budget amendment.

Since her arrival in the Senate, the federal deficit has grown by $5.7 trillion.

"I will continue to push for my balanced budget amendment because we need to live within our means," she said. "But it's not easy."

Hyde-Smith didn't mention her opponent by name, but painted Espy, a former Clinton cabinet member, as "the most liberal candidate the state has ever seen."

Espy is seeking to become the state's first Black U.S. Senator since the end of Reconstruction.

She has been criticized for rarely taking questions from the media, refusing to debate Espy as the Nov. 3 election approaches and failing to hold a town hall meeting with her constituents since becoming a senator.

Hyde-Smith left the luncheon before its conclusion and was not available for questions from the media after her speech.