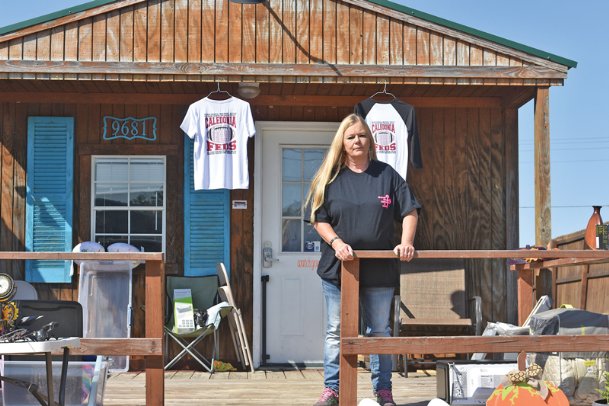 Caledonia resident Tamara Jacobs stands outside of her shop in Caledonia Friday afternoon. She started local nonprofit Carpenters for Christ, which focuses on helping women continue to fight drug addiction after they have been released from jail or rehab. The nonprofit plans soon to build a "clean living home" to that end that can house up to six women who are trying to get back on their feet. Photo by: Garrick Hodge/Dispatch Staff

Julia Chavez hangs donated clothing Wednesday at her Columbus-based nonprofit Saving Grace Ministries, which gives clothes and other necessities to people in need. Chavez is one of the women who said her life was changed after working with Columbus Carpenters for Christ, which held Bible studies with her and other inmates when she was incarcerated at Lowndes County Adult Detention Center in 2013. Carpenters works to minister and provide resources to women coming out of prison or rehabilitation facilities and is hoping to build a clean living home where women can live while they get back on their feet.
Photo by: Isabelle Altman/Dispatch Staff

When Julia Chavez walked into the Lowndes County Adult Detention Center one Friday night in 2016, the sound of the jail door clicking made her stomach flip, she said.

Chavez remembered the sound from the three months she spent in the jail three years before. The Caledonia resident had been in and out of detention facilities for much of her adult life, and in January 2013, she was arrested for violating probation after she failed a drug test.

But this night was different. Chavez had been clean and sober since getting out of a Jackson rehabilitation facility at the end of 2013. And this time she wasn't going to the jail as an inmate -- she was part of a Bible study with Columbus Carpenters for Christ, a local nonprofit that works with incarcerated women who struggle with addiction.

It was an organization that worked with Chavez while she was in jail.

"Walking into the same room that I used to come to that had Bible study and not being in a jumpsuit ... it was emotional," she said. "I can't even explain how good and how much grace and mercy that I felt. I knew in that moment that I was in the will of God, and that this is what I wanted to do. This is why I had been through everything that I went through. It was like all my pain and suffering was down to this moment, sitting in a room full of women that are looking at me, and I used to be in their shoes."

The Bible study is only one aspect of Carpenters, said Tamara Jacobs, a Caledonia resident who started the faith-based organization in 2010 to work with incarcerated women who struggle with addiction. The organization connects women with resources and encourages them to obtain and maintain sobriety through church attendance and engagement in community service.

Like Chavez, Jacobs struggled with drug addiction for much of her life.

"I was an addict for 19 years. I've been clean 12," Jacobs said. "The way I've stayed clean, I have stayed busy doing my ministry. I've never been to rehab. ... I believe (staying clean) can be accomplished by doing community service, just staying busy and surrounding yourself with people of faith."

Members of the organization volunteer at Caledonia Days and other community events, fundraise by working concessions at sporting events and host an annual walk-a-thon, "Walk a Mile in their Shoes," at Ola J. Pickett Park, which will be held at 9 a.m. on Oct. 24 this year.

Their biggest upcoming project is an ambitious one -- Jacobs hopes to build a clean living home for women coming straight out of prison or rehab and who need a place to stay.

"About three years ago, we kept seeing the same faces over and over and over again," she said. "We had been praying about it for a while, and we decided that we would build a home for some of these women that are coming out of incarceration or addiction."

The clean living home will be built on two acres of property on Cal Vernon Road in Caledonia and will be able to house up to six women at a time, Jacobs said. The women must have jobs while they live there so that they can pay off any fines they owe the court and start to get back on their feet.

"I wanted to keep it more like a home than an institution," she said.

The idea behind the project was to give women a place to go where they could start over if they needed to. Jacobs said she noticed many of the women at the jail who kept being arrested simply didn't have anywhere to go after they were released but back to homes full of drugs and alcohol.

Chavez said that was the problem she ran into before her arrest in January 2013.

"As soon as I got out of prison, there it was -- the same home I had, the same environment, drugs and alcohol and the poverty," she said.

Conversely, after she got out of rehab, she moved in with her boyfriend -- now her husband -- in a home without drugs or alcohol. Her success at staying clean there is why she thinks the clean living home Jacobs and other members and volunteers at Carpenters want to build is a good idea.

"It will help women be successful, not obligated to go back to the same lifestyle that they had lived before they were incarcerated," she said.

Jacobs stressed the home is not a rehabilitation facility, more of a stop for women after they get out of rehab and need to get back on their feet. She said while she and others at Carpenters have pointed women in the direction of Community Counseling Services and other rehabilitation facilities in the area, she doesn't believe rehab is necessary for every addict to stay clean.

Carpenters has been slowly raising money to build the home, though Jacobs said the COVID-19 pandemic has put them about nine months behind.

Her son, Robert L. Jacobs, who is helping oversee construction, said he hopes to have the foundation for the house laid this fall and for actual construction to begin in the spring, though he said that will depend on weather, the pandemic and fundraising.

Both Chavez and Jacobs said they have seen plenty of women kick addiction and turn their lives around when they put their mind to it.

They're not alone. Assistant jail administrator Lt. Dylan Williams, who has worked at the jail nine years, said he's seen inmates stop the cycle of addiction and recidivism thanks to organizations like Carpenters and other nonprofits that work with inmates.

"These ladies with Carpenters for Christ are really doing everything they can to kind of build them up," he said.

Though no visitors have been allowed to come since the COVID-19 pandemic began in February, Williams said before then, Carpenters volunteers would host Bible study or small groups in a "multipurpose room" where inmates had the option of participating. He said he's seen women at their lowest points leave the jail and not come back because they successfully changed their lives.

"Maybe a year or so down the road, I haven't seen them," he said. "They've been doing Carpenters for Christ, and I see them speaking at a church."

Chavez said she's one such person who did that. Not only has she been actively involved with the organization, but she's started her own organization, Saving Grace Ministries, which collects donations of clothing and other necessities for people getting out of prison or rehab, as well as survivors of domestic violence and others in need. She said she's glad to have the support of Carpenters and glad to be able to help women who were once in her position.

"I've seen people do a complete turnaround, get their lives back, get their children back -- a lot of women lose custody of their kids -- but then again, I keep seeing the same faces too, over and over again," Jacobs said. "It's a cycle. And that's why I do what I do. I want to try and break that cycle."

What: Fourth annual Walk a Mile in my Shoes, to raise awareness of addiction

Who: Hosted by Columbus Carpenters for Christ

How: Find out more at Carpenters for Christ Facebook page (https://www.facebook.com/hokeypokeyhouse/)