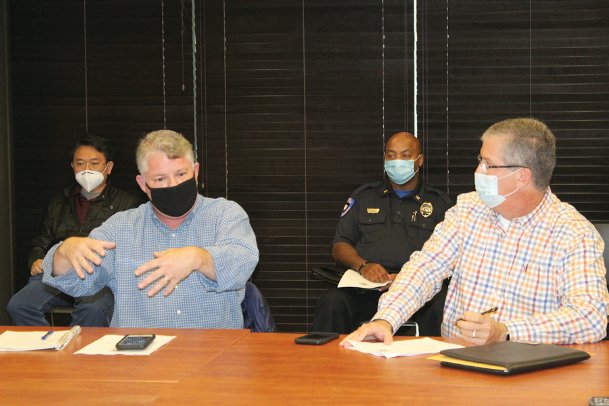 Ward 3 Alderman David Little, right, listens to State Rep. Rob Roberson (R-Starkville), second from left, explain at Friday's work session that the city would benefit from asking the state Legislature to fund a multimillion-dollar project. The aldermen discussed a variety of options, including building a new library or relocating the county jail, but did not come to a unanimous agreement, so Mayor Lynn Spruill said the board will meet again within the next few weeks. Photo by: Tess Vrbin/Dispatch Staff 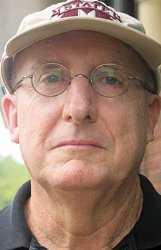 Starkville Mayor Lynn Spruill had been hoping she and the board of aldermen could come to an agreement Friday on what kind of project to request the state Legislature fund during its next session.

Instead, the board and state legislators will meet again in the next couple weeks, since they discussed several possible projects -- from roads and drainage to a library and a parking garage -- at Friday's regular work session but did not agree on a particular one.

State Rep. Rob Roberson (R-Starkville) said the city needs to have a general idea of how much the proposed project will cost and how much the city is willing to match the state's contribution. He suggested asking for $50 million to $60 million, even though the Legislature might not agree to that, because a large request gives the city the ability to negotiate.

"I feel like Starkville and Oktibbeha County have been ignored, as far as projects are concerned, for years," Roberson said. "It feels like we've become the redheaded stepchild at times because we don't ask."

He said the city should make a request every year, which larger communities in Mississippi such as the Gulf Coast cities do, and while projects are not guaranteed, at least they will be considered.

"I'm a firm believer in shooting for the stars and if we hit the moon, we're doing better than we've been doing," Roberson said.

Spruill's preferred project would be to extend Hospital Road west and connect it to Highway 25, but the aldermen presented several ideas that she said are also viable options.

Ward 2 Alderman Sandra Sistrunk said the city should build a new library, since the current one is about 60 years old. She suggested locating it on Highway 182 as an "anchor building" to "jumpstart development" upon completion of the planned revamp of a mile of the state highway with a $12.66 million grant from the U.S. Department of Transportation.

Roberson said a project that helps low-income communities might be well-received at the state level, and Sistrunk said a new library fits the bill.

"For everything that we know and love about our community, in a lot of ways we are a high-poverty area, and the library is that resource for a lot of people who need access to computers, access to books, a place to get to the internet because they don't have it out in their community, out in the county," Sistrunk said.

Roberson said he is not opposed to the idea but believes libraries are not as attractive as they used to be, and Sistrunk countered that this is "because we haven't seen one done well."

She also said Ward 5 Alderman Hamp Beatty's suggestion of relocating one of the city's fire stations was a good idea. Beatty said this could be useful in light of the city's move to annex land to the east, along the Highway 82 and Highway 182 corridors out to Clayton Village and in the University Hills area on the east side of Mississippi State University.

"A lot of our calls now go out to MSU anyway, and if we're successful, we're going to have several hundred homes and businesses out there that we'll be covering," Beatty said.

He also said both northern and southern Starkville could use new and improved drainage systems in light of the historic amounts of rain the area has received in the past year.

Other possible projects included relocating the county jail, which would be a collaborative effort with Oktibbeha County, and building a parking garage behind Starkville Cafe downtown.

Multiple aldermen mentioned the possibility of turning the railroad that bisects Starkville from southwest to northeast into a biking and walking trail, an idea that arose about a year ago but has not developed beyond that. The railroad runs from Ackerman to West Point and has not been used in several years, and the trail would be part of the national network created by the nonprofit Rails-to-Trails Conservancy.

Kansas City Southern, the company that owns the railroad, has not responded to the city's requests to discuss the idea, and the transportation company Watco currently has a 15-year lease on the rail line that "doesn't afford them an opportunity to do much of anything," Spruill said.

The aldermen will meet again in the near future in order to come to a consensus on a potential project, since they need to be unanimous in order for the request to the Legislature to succeed, Spruill said. The next meeting might involve representatives from the county and more state legislators, including state senator-elect Bart Williams (R-Starkville).

"We'll see if we can come up with a project we can put forward with Rep. Roberson ... and we'll have the opportunity to develop it together," she said.