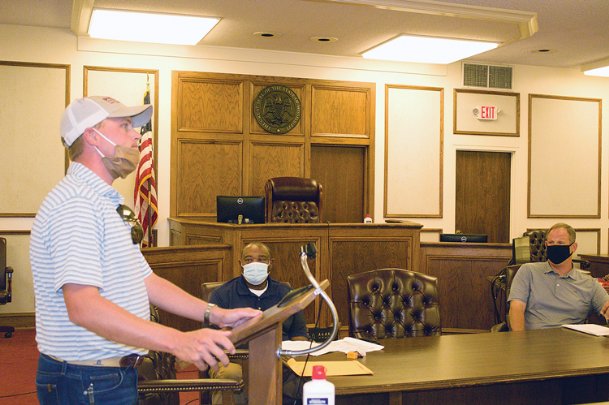 Blake Hill, left, vice president of Phillips Contracting, explains to the Oktibbeha County Board of Supervisors at its Monday meeting that the Columbus-based company waited months for AT&T and 4-County Electric Power Association to move utility wires on Longview Road. Phillips accepted a $2.2 million contract in July 2019 to pave the road, which area residents have waited for years to happen, and Hill said the company had been hoping to start the project in the spring and be almost done by now. Photo by: Tess Vrbin/Dispatch Staff 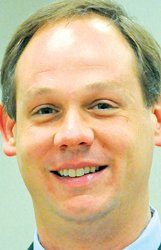 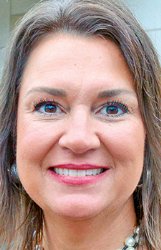 The first stages of the long-awaited paving of Longview Road will most likely start in the next few months, after the COVID-19 pandemic delayed the movement of utility wires along the roadway.

Residents along the gravel road southwest of Starkville have been waiting decades for the road to be paved, and the board of supervisors awarded the project to Columbus-based Phillips Contracting in June 2019 for $2.2 million.

The paving has not yet started, and Phillips Vice President Blake Hill told supervisors Monday he wanted to make it clear that the company is not avoiding the project. Construction crews have cut down trees along the length of the road in preparation for paving, but Phillips has been waiting for utility companies to finish moving wires, Hill said.

"4-County (Electric Power Association) was supposed to have the power (lines) moved by March 1 and that was completed in July, and AT&T was supposed to be working simultaneously with them and they completed theirs in mid-September," Hill said. "What that has forced us to do is a lot of dirt work, and a lot of construction work is not suitable to do in the winter."

Phillips will try to start the project as soon as possible, starting on the west side, and get as much work done as possible outside the roadway as the rainy season approaches. Hill said the company plans to pave the road in 2021.

The initial goal was to start the project in April or May of this year and be almost done by now, Hill said.

"Our plan is to be over there as much as we can," Hill said. "We've got to have enough work to justify being there, so it might be sporadic around the weather."

Phillips' contract allows for about 300 working days, rather than a set deadline to finish the project, Hill said.

Parts of Longview Road are in District 1 and 4, respectively. Supervisors John Montgomery of District 1 and Bricklee Miller of District 4 told The Dispatch they appreciated knowing specifically why the project has taken so long to begin.

"We just kept hearing (about) utilities, so I think they did a good job clearing that up and actually giving us the delay times for each utility, how long it took them to get it moved," Miller said. "Up until this point, we did not know that."

Securing funding to pave the road took several attempts over several years. In June 2018, supervisors de-obligated funds from the Mississippi Office of State Aid Road Construction to pave portions of Longview Road because federal funding to support the work hadn't come through. The State Aid office later that year expanded the scope of the project to include all 3.77 miles of the road, and the board re-obligated State Aid funds to be matched by federal Surface Transportation Program (STP) funding.

Montgomery and Miller allocated a combined $742,000 in State Aid funding for the project. The county is also using $250,000 of its own money and $750,000 in BP oil spill settlement money the Legislature approved for the project during a special session in August 2018. The funds amount to $1.74 million, and Miller said in 2019 that the county would get enough State Aid money for the project to cover the remainder of the cost and give a roughly $150,000 buffer.

In other business, the supervisors unanimously renewed the county's curfew, which runs from midnight to 4 a.m. They first enacted it Sept. 8 to discourage large parties as the pandemic continues.

They also voted 3-2, with Montgomery and Miller dissenting, to continue to require protective face coverings at county-owned buildings and social gatherings outside the Starkville city limits.

Both the curfew and the mask mandate will be in place until at least the next meeting on Nov. 2.

The supervisors will hold a work session at 9 a.m. on Oct. 28 to discuss a variety of issues, including the county's ordinance for dealing with vicious dogs. An Oktibbeha County citizen asked the board in September to reconsider the current ordinance after a stray German Shepherd killed several livestock, and at least two pit bull mixes attacked and injured a citizen in Maben last week.