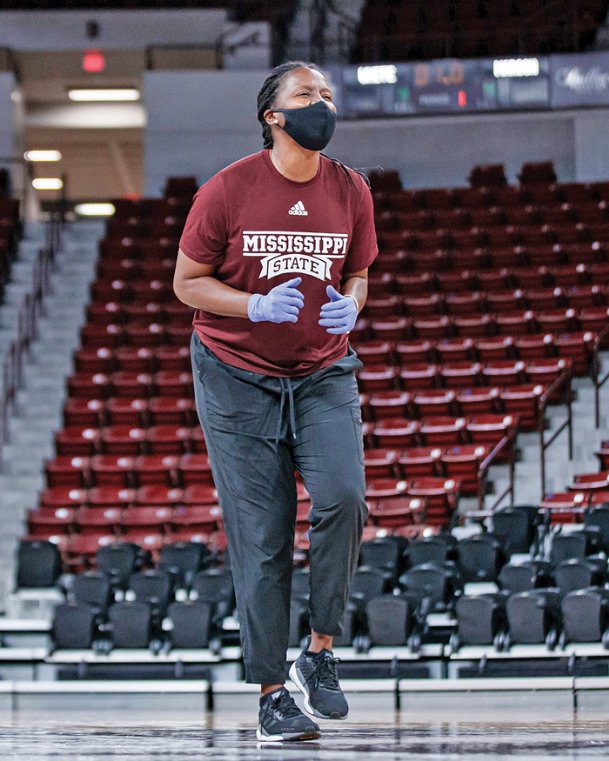 Mississippi State head coach Nikki McCray-Penson lost her mother, Sally Coleman, to breast cancer in July 2018, while she endured her own battle with the disease from November 2013 through April 2014. Photo by: Courtesy photo

Each October, Mississippi State head women's basketball coach Nikki McCray-Penson thinks back to the Sundays of her youth.

The evening prior, McCray-Penson stayed up late into the night helping her mother, Sally Coleman, prepare food for the following day. Her job, she said, was to always lick the bowls of whatever remnants there were of that week's cake batter.

Sundays always adhered to a similar structure. The cousins, of which there were plenty given that McCray-Penson's grandmother had 13 children, went to Sunday school at St. Mark's Baptist Church in Collierville, Tennessee. Regular services followed.

The family then gathered in the afternoon for a feast. Elder members of the household played cards, McCray-Penson and her cousins raced down the sidewalks, jumped fences and, yes, played basketball, before everyone headed home for the night between 6:30 and 7 p.m.

"I was very close to my aunts, my uncles, my cousins," she said. "Those are like my best friends."

Cemented firmly in the center of McCray-Penson's youth was Coleman. The two were close. McCray-Penson notes she gets a lot of her personality from the family matriarch. It's part of the reason Coleman's death in 2018 after a second bout with breast cancer that arose just four and a half years after McCray-Penson's own diagnosis hit so hard.

"She was a hard worker, loving, caring," McCray-Penson said. "Everybody loved to be around my mom. She was just kind of like a beacon of light."

'She was as brave as anyone could be'

McCray-Penson's personal battle with breast cancer began in November 2013 when she noticed a lump while taking a shower.

Then an assistant at South Carolina under Dawn Staley, she mentioned what she had found to another assistant coach. Urged to get the lump checked out on Friday, she was in the doctor's office the following Monday.

McCray-Penson underwent lengthy testing, including an ultrasound and biopsy. The following day she was diagnosed with breast cancer.

"I think for about one hour, I cried for every single second -- hard," she said "After that, (I) just started to have a plan of attack. Got a team together that gave me a lot of confidence. Got a lot of opinions about which way to go, and I never looked back. I didn't allow cancer to define me."

In the weeks that followed, McCray-Penson endured a volatile cocktail of treatments -- radiation and chemotherapy among them.

When she received her chemotherapy treatments, Staley and associate head coach Lisa Boyer were always by McCray-Penson's side.

"She was as brave as anyone could be," Boyer told The Dispatch in April. "She was really a fighter. I can't say enough about her ... will to fight through things and to handle the situation. She never brought that to the office. She never missed a day at work."

Then in their sixth season in Columbia, Staley's and McCray-Penson's relationship dated back to the United States Olympic teams of the mid-1990s. Still a college standout when she first played with Team USA's senior squad, McCray-Penson and Staley shared the same backcourt during gold medal runs at the 1996 and 2000 Olympics in Atlanta and Sydney, Australia, respectively.

Among Staley's first hires after she was offered the head coaching job at South Carolina, McCray-Penson, Boyer and assistant coach Carla McGhee even lived in Staley's house upon arrival in Columbia, as no one else on staff had secured a home at the time.

"I had to talk Nikki into some things because she would second-guess it, and she knows me from being that way with her," Staley said in April of coaxing McCray-Penson into taking an assistant job with her. "I am just like, 'Let's go. There's no black and white. You know what we've got to do.'"

During McCray-Penson's treatments, Staley always kept a watchful eye over her friend. She scheduled practices around McCray-Penson's appointments to ensure she could be a presence on the floor.

"(Staley) kept it normal for me," McCray-Penson said. "And I just really appreciate that because being in a chair (receiving chemo) and them being at practice would've been hard, especially for six months you're doing that."

The 2013-14 season proved a breakout one for the Gamecocks. Staley, Boyer and McCray-Penson helped guide the program to the Sweet 16, its best postseason result since an Elite Eight more than a decade earlier.

On March 10, the final Associated Press Top 25 poll of the year ranked South Carolina No. 8 in the country. Just a few weeks later, McCray-Penson's cancer was declared in remission following roughly six months of treatment.

"It wasn't about feeling sorry for (me) -- it was not that," McCray-Penson said. "We just played hard. We loved each other. We just competed every day to get better."

The revelation Coleman had been diagnosed with breast cancer in 2006 was shocking. The impact was felt even harder when she was re-diagnosed in 2018.

Having just completed her first season as the head coach at Old Dominion, McCray-Penson was toiling through a rebuild at a once-proud program. Under head coach Wendy Larry, the Monarchs won 17 Colonial Athletic Association championships between 1987 and 2011. Old Dominion even reached the national championship game in 1997, losing to Tennessee and legendary coach Pat Summitt.

But with her mother stricken with breast cancer for the second time, McCray-Penson took a leave of absence to be with the woman who raised her. In the months that followed, Coleman entered hospice care in Collierville. From April until her death in July, McCray-Penson was by her mother's side just as Staley and Boyer had been by hers.

Coleman shared countless stories with her daughter and the slew of family members who visited in her final months. During a time that could've been marred by sorrow, instead there were laughs and smiles. Each waning moment was cherished.

"You're just really holding on to every second," McCray-Penson said. "And just taking advantage of the time that you have together and enjoying every minute."

A legacy to be carried

Perched behind the podium in the underbelly of Humphrey Coliseum, McCray-Penson steps before a camera to share thoughts on the Bulldogs' first week of practice ahead of the 2020-21 season. Donning a pink-tinged shirt as a nod to breast cancer awareness month, it's also a subtle reminder of the impact the disease has had on her life.

The past few months have been anything but normal. McCray-Penson was hired by MSU in early April following the sudden departure of Vic Schaefer to Texas. An 886-mile move from Norfolk, Virginia, to Starkville amid the COVID-19 pandemic ensued.

A little more than two years on from her mother's death, McCray-Penson remains an advocate for breast cancer research. During an Oct. 10 excursion to the nail salon, she and a handful of her players had their nails painted pink as a nod to the disease -- the second-most commonly occurring cancer in women, according to the National Library of Medicine.

Perhaps most importantly, McCray-Penson also serves as the keeper of Coleman's memory -- the late Saturday nights licking leftover cake batter out of the bowl and the recurring Sunday family gatherings in Collierville.

"Anytime you've gone through an experience you have an opportunity to share," she said. "A lot of women go through this every day and just to be able to share that they're not alone (and) that treatments are getting better and women are beating cancer every day.

"I just pray and hope one day they find a cure," McCray-Penson continued. "That would be my hope."