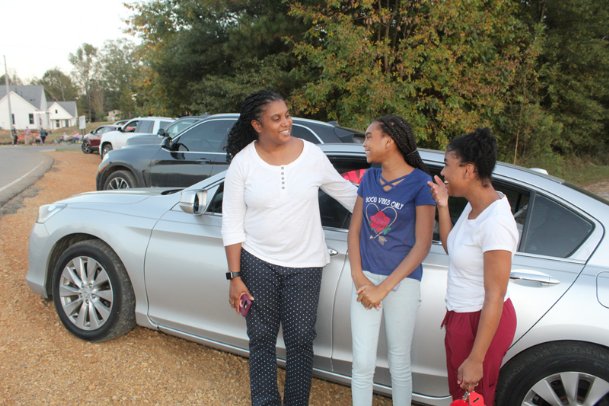 Terra Robinson and her daughters, Luxury Wordlaw, 14, and Tyerria Bryant, 21, wait by their car on Yellowjacket Drive in Starkville for the Starkville High School parade Thursday night. The parade is one of the few major homecoming events that still happened after both the football game and dance were canceled, the latter in response to surging COVID-19 cases in Starkville-Oktibbeha Consolidated School District. Photo by: Isabelle Altman/Dispatch Staff

Joni, Michael and Aidan Prescott, 11, pose together in front of the Starkville High School baseball fields before the school's annual homecoming parade Thursday night. Joni and Michael's other son, sophomore Joel, plays trumpet in the band, and his parents said the parade may be their only chance to see him march this year thanks to the COVID-19 pandemic causing event cancellations.
Photo by: Isabelle Altman/Dispatch Staff

Seniors Madison Shultice and Audrey McReynolds chat together after the Starkville High School homecoming parade Thursday night, in which Shultice is a senior maid in the homecoming court. Though other homecoming events such as the football game and the school dance are canceled, they said they were glad they could participate in some traditional high school events their senior year.
Photo by: Isabelle Altman/Dispatch Staff

It's a tradition for Terra Robinson and her family to attend Starkville High School's homecoming parade every year.

Robinson, a second grade teacher at Henderson Ward Stewart Elementary School, said she often has a family member or someone she wants to support participating in traditional high school homecoming activities. This year, it was two nieces in the homecoming parade.

So on Thursday night, she and her daughters parked on the side of Yellowjacket Drive, walking distance from the high school, and waited for the familiar parade of cheerleaders, band students and floats to round the corner and march the last few yards of the parade route to the school.

But this year was different than years before. She and her daughters had face masks in the car ready to put on if other people got close. Though a friend honked their horn at Robinson as they drove by and Robinson waved in response, her family kept their distance from other people gathered in small clusters to watch the parade, which ended a week full of surging COVID-19 cases throughout the Starkville-Oktibbeha Consolidated School District.

The football team is quarantined for two weeks after five people associated with the program tested positive for the virus, Athletic Director Greg Owen said in a letter to parents. That was after the homecoming game, originally scheduled for this Friday, was canceled due to the team's opponent, Murrah High School's, district canceling their sporting events.

The high school girls basketball team is also in quarantine due to positive tests, and an entire elementary class is having to quarantine, SOCSD Superintendent Eddie Peasant wrote in an email to parents.

SOCSD Public Information Officer Nicole Thomas said there were 11 cases of the virus district-wide as of Thursday -- the highest number of cases in one week since the school year began, Peasant said in his email.

"Everything was going so great at a particular time, but now we've had some cases," he said. "We think it's just best not to have that many students out there (at) a dance."

While parents and other onlookers gathered on Yellowjacket Road waiting on the parade Thursday night didn't seem too worried about the virus -- at least not worried enough to stay home instead of watching the parade -- many of them wore masks even when not within six feet of others and many of the small groups of families and friends stayed away from other groups.

"We're disappointed (about the football team), but we kind of figured due to COVID and practicing without masks and stuff like that," Robinson said. "But we're disappointed because so much (has) already been taken away. But we understand due to safety reasons and things like that. I was excited they still continue with homecoming."

Madison Shultice, a senior maid in SHS's homecoming court, and her friend Audrey McReynolds said they were glad to be involved in the parade at all, given they hadn't known what events they could expect going into their senior year of high school in the middle of the COVID-19 pandemic.

"I was obviously sad that it would be different and I wouldn't get the entire senior experience, but I did expect to have some sort of homecoming," Shultice said after the parade, standing alongside the car she'd waved from on the route from Lynn Lane to Yellowjacket Drive. "But we've actually gotten to do more than I thought we would end up being able to do."

"I think they're just trying to make sure we can stay away from people as much as possible and try to have as many events outside as we can," McReynolds agreed. "That's why this was able to happen. Everyone was outside, distanced."

The surge in cases, combined with 400 of SHS's 1,067 students already being virtual-only, means students are missing out on traditional parts of high school culture, Savage said.

"I always try to put myself in the shoes of a student," he said. "When I was a student, these things were so important. I'm 44 years old, and I can still remember my homecoming dance. I remember graduating, and I remember my mom yelling my name and how it made me feel."

It's particularly relevant in light of last year, when students finished out the spring term virtual-only and major events like prom and traditional in-person graduation were canceled.

"Students have had to deal with a tremendous loss of their culture and their experience at high school, and (through) no fault of their own," Savage said. "I think part of our job as educators and as leaders in education is to try to give them some sense of normalcy where we can, where it's safe within the guidelines."

With that in mind, Savage, student leadership and district administrators all wanted to hold what events they still could.

For students, that meant thinking outside the box when it came to planning homecoming and other events, said Sara Fraza, a special education teacher and the student council adviser at SHS.

"With everything that happened in the spring time ... the kids, when we brought up homecoming, they seemed a little sad and they thought that we couldn't do anything," she said. "Once we talked about thinking outside the box and trying to come up with different ways to still have fun but try to do it in a more distanced or safe way, then they started to perk up and got excited about thinking about things."

The homecoming parade ended up being one of the easier events to plan since it was outdoors, she said. Though the parade moved from its traditional downtown route to a shorter one closer to the school, students still could decorate their floats, with the understanding that there would be a limited number of people on each float and that they would be wearing masks.

For other events, she said, students and staff had to think about venue. A traditional basketball game between students and teachers that is typically held in a "packed" gymnasium turned into an outdoor dodgeball game. The school play went from being an in-person event to a virtual one streaming on YouTube. During next week's dress-up day -- part of a traditional homecoming week -- virtual students will be able to participate by uploading pictures of themselves in their costumes.

Where events simply can't be held because of safety, administrators have tried to put something in their place. Savage said the budget that would have gone to a homecoming dance will instead go to a spring dance currently scheduled for March. The homecoming court will be presented at 6 p.m. next week at the SHS football field in a ceremony where everyone will be socially distanced and wearing masks.

"Kids are so happy to be back in school," Savage said. "Behaviors are great. Their response to learning in the classroom is great. And we just want to build on that by trying to give them some sense of normalcy."

Parents, too, said they were happy about that sense of normalcy at the parade.

Joni and Michael Prescott, whose son Joel is a sophomore trumpet player in the band, said the parade may be the only time they get to see their son march this year. Joel was also excited, they said.

"He wanted to make sure that we were here," Michael said.

They said they weren't necessarily worried about surging cases of the virus -- in fact, they originally had their children enrolled for virtual learning and changed their mind after the semester had already begun, to allow the students more interaction with teachers and friends.

Both he and Joni said they thought school officials had been doing a good job balancing normalcy with safety. When Michael drops Joel and his younger brother Aidan off at their schools every day, staff members are there ready to check students' temperatures, and everyone is wearing a mask -- more reminders that this year is different than previous years.

"I appreciate the fact that they're still trying to do some type of normalcy," Joni said.

Even without homecoming games and dances, the parade is important, McReynolds and Shultice said.

"Not knowing if we'd get to do something was terrible," Shultice said. "It being our last year, I was literally emotional about it because I thought we wouldn't get to do anything, so it means a lot to just do this. If this is all we get to do, it means a lot."