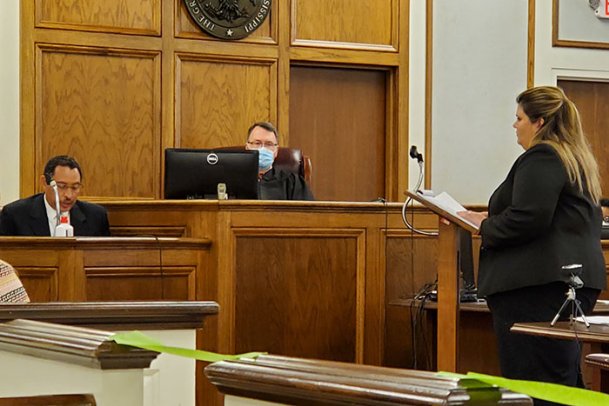 Bennie Hairston, left, chairman of the Second Baptist Church Board of Trustees, testifies during a civil trial Friday in Oktibbeha County Circuit Court. Also pictured are Judge Jim Kitchens, center, and prosecuting attorney Lindsay Roberts, right, of Jackson-based Carson Law Group. Hairston and the board of trustees sued Second Baptist pastor Joseph Stone and head deacon Terry Miller in 2015, alleging that they negotiated a construction contract to build a new sanctuary without the boardâs approval. Photo by: Tess Vrbin/Dispatch Staff 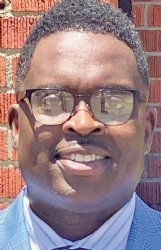 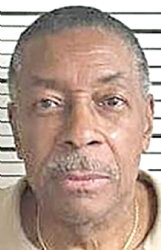 As chairman of the Second Baptist Church Board of Trustees, Hairston believed Stone, the church pastor, when Stone said the church had secured a bank loan to build a new sanctuary. He found out this was not true when a loan officer from Renasant Bank contacted him about steps the church needed to take in order to receive a loan.

"That shocked me, because we'd started moving dirt (and) money had started going out," Hairston said on the witness stand in Oktibbeha County Circuit Court on Friday, the fourth day of a civil trial against Stone and Head Deacon Terry Miller.

Hairston and the board of trustees filed suit in late 2015, alleging Stone and Miller negotiated a May 2013 contract with Long Beach-based TCM Construction to build a new sanctuary without the board's approval and withheld money collected through church offerings from the trustees.

Current and former trustees, as well as members of the now-disbanded building committee, backed up claims that Charles Ware, a spokesman and adviser for the board, made on the stand Tuesday. They described a culture of intimidation in which Stone would characterize anyone who disagreed with him as a traitor to God and the church and vilify them from the pulpit.

"One of his sermons was (about) running the devils out, (saying) we have a bunch of devils in here and we've got to run them out," Hairston said.

Stone's invocations of religious loyalty to promote the building project also happened in one-on-one conversations, according to a 2013 email to Linda Cornelious, who chaired the board of trustees from 2006 to 2015.

"Some people believe it's their jobs to look out for the best interests of the church, but that's God's job," Stone wrote in the email Cornelious read during her testimony. "He doesn't need our help. He needs our willful obedience."

The trustees went on to pay TCM's owner, Donald Crowther, more than $454,000 for the work he was supposed to do, but all that was ever completed was preliminary dirt work, and the project has not been touched since 2015. The building permit expired in October 2017, and Crowther was initially included as a defendant in the 2015 suit.

A second civil lawsuit, filed solely against TCM in 2018, settled Oct. 14 for $280,000, and as a result, Crowther is no longer a defendant in the case against Stone and Miller.

Crowther, who is scheduled to be sentenced for criminal fraud on Nov. 2 after he pleaded in July to preparing and submitting false invoices of checks paid to the contractors, testified Thursday and Friday that Stone was his main source of interaction with the church. He said this was standard operating procedure in previous church construction projects.

"At the small Black churches we'd work on, the pastor always took the lead and he'd take it back to the committees," he said.

Hairston testified that Stone asked him in July 2015 to co-sign a notice to proceed with the building project. Hairston agreed, and construction workers broke ground, only to stop within the same month.

The second page was actually a change order that transferred all responsibility for the contract to Hairston, he said.

"If things just went south, it would have been all on me," he said.

Both Crowther and Hairston said they believed the building contract must have been valid if Stone had a notice to proceed. However, the validity of the contract was in question. Starkville attorney Russ Rogers was the church's go-to lawyer for advice and signatures if necessary, and he had examined the contract and determined it was invalid, according to a February 2014 email he sent to Crowther.

The contract had only been signed by one trustee, Barbara Patrick. Ware and Cornelious said the church's bylaws required signatures from all the trustees on a building contract.

Cornelious and former trustee Christinia Townsend-Clark both testified that Stone told the trustees he modified the signature page because he was concerned the project would not move forward otherwise.

Rogers said in a later email that Crowther should fully refund the $50,000 down payment he had received from Stone, who had admitted to the church that he made the payment without a signed contract in place, according to Ware's testimony.

Crowther said he had disagreed with Rogers' assessment and instead deferred to Stone's assertion that the contract was valid.

The trustees, on the other hand, wanted the $50,000 back, but Cornelious and Townsend-Clark both said they were ostracized within the church for standing up to its leadership.

Cornelious and Townsend-Clark both resigned from the board in January 2015 after they found out Stone was planning to propose a vote to remove them at an upcoming church meeting for their alleged disloyalty to him.

"(Second Baptist) is where I thought my eulogy would be," Cornelious said. "But we were being talked about like we're not the good stewards we think we are."

But Stone was present at every building committee meeting for the sanctuary project, and his proposed designs became more elaborate even as the church's budget for the project was shrinking, said Roger Pryor, founding director of PryorMorrow, an architectural engineering firm with an office in Columbus, which had initially been hired to design the sanctuary.

"We were trying to come up with ways to beat this thing down into the budget ... and you've got to make substantive changes," Pryor testified Wednesday. "You can't just change little things."

Second Baptist and PryorMorrow had a "mutual parting of ways" in February 2013 because they could not agree on how to design the sanctuary both safely and with financial prudence in mind, Pryor said.

Stone pushed for design plans that violated building codes, such as a wood frame instead of a steel frame, and Pryor said he refused to go along with it.

Hairston and Ware both said Stone created a cult-like following within the church. However, William Starks, the Columbus-based attorney representing Stone and Miller, asked both Hairston and Ware if they were simply upset they did not get their way throughout the years of debate about the building project.

Starks asked Hairston if Ware had developed his own cult on their side of the debate, and Hairston said no. He cited a statement from the late Rep. John Lewis of Georgia, an icon of the civil rights movement, that those who see something wrong must speak up and do something about it.

"That's what we've been doing," Hairston said. "We're not quitters. If we don't protect the church, who will?"

The trial will continue next week with more testimony from Hairston and later from Stone and Miller, as well as other witnesses.