Dan Camp, 'Mayor of the Cotton District,' passes at age 79 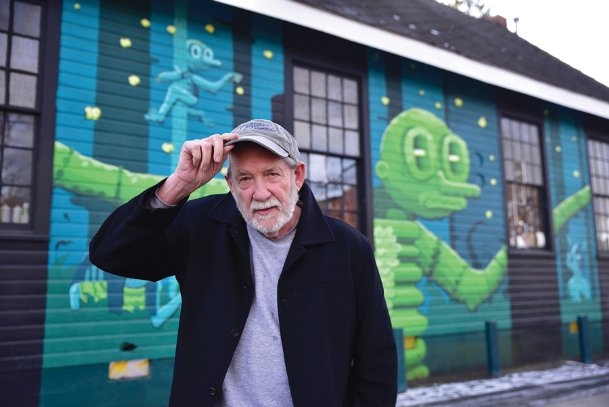 Dan Camp, known as the Mayor of the Cotton District, died Sunday at the age of 79 after a month-long battle with COVID-19. In addition to transforming the area from a blighted part of Starkville into a mecca for Mississippi State students and nightlife/entertainment, the former one-term Starkville mayor was an advocate for the arts, including the mural movement that adorned many of his Cotton District properties. Photo by: Dispatch file photo

Dan Camp was a one-term mayor in the city of Starkville, but he will forever be remembered as "Mayor of the Cotton District."

Camp, 79, died early Sunday of COVID-19 after a month-long struggle with the virus. He was immediately hailed as a visionary for his role in developing a blighted area of the city once occupied by an old cotton mill into what is known now as the Cotton District, a bustling bohemia of apartments, nightspots and restaurants that united the city and the university's student population like nothing before or since.

"You'll hear this a lot, but Dan was a true visionary," said Roy Ruby, the longtime Mississippi State administrator who first met Camp more than 50 years ago when both worked at the university. "His genius as a developer and his artistic approach in terms of designing an area that has notoriety has been a significant contribution, both to Starkville and the university."

Starkville Mayor Lynn Spruill hailed Camp as a family friend, colleague and mentor. Her connection to Camp goes back to her youth, when her father, the late L.E. Spruill, and Camp fashioned a friendship over their mutual real estate professions.

"Dan was loud, messy, one of those people with a big personality," said Spruill, who moved back to Starkville just in time to help with Camp's mayoral campaign in 2005 and became his chief administrative officer after Camp won the election.

Camp served just one term, losing to Parker Wiseman in 2009.

Although his prowess for building the city was never questioned, Camp was not well-suited to politics, which both Spruill and Ruby said was the primary reason for serving only one term as mayor.

"Dan was hard-headed, no question about it," Ruby said. "Nobody would call him a great negotiator, but he was very talented and a great leader."

Spruill said there was a simple secret required to working with Camp.

"You have to make sure your volume was equal to his," Spruill said. "He was loud and forceful, but if you could raise your voice high enough, he would listen. I think a lot of people never understood that about Dan.

"He and I would yell at one another at city hall or on the phone, but the thing about Dan is that if you put forward your ideas, if you could do it over the shouting, he was willing to listen," she added. "He'd come back and say, 'I've thought about this. You have a point.' It was one of those wonderful relationships you grow from and learn to appreciate."

During his term as mayor, Camp's focus was on doing for the city what he was already doing in the Cotton District. He called for the city to invest in a $12-million bond program to improve infrastructure after years of what Camp referred to as "do more with less" philosophy he believed sold short the city's future.

That effort, along with his vision to create a new municipal complex downtown, fell short. The city approved just $3 million for infrastructure and his municipal complex never materialized, at least not in the way he imagined.

The city later refurbished the old city hall, transforming it into the city's police station, while converting the old Starkville Electric Power building on the west end of Main Street into a city hall complex that opened in 2017.

"His plan wasn't successful at the time," Spruill said. "It's like that a lot of times with people who have a vision. People may not see it at first, but the message was received and eventually it did happen."

While his term as mayor may have received mixed reviews, his prowess in inventing the concept of the Cotton District and his success in implementing it are beyond question.

"Dan and I were both at the university back in the 1970s," Ruby said. "I was the program director at the new student union and Dan was teaching vocational students. We were just young men, working at the university. Our wives were friends and we did a lot of things, went a lot of places together. Then, he got the idea that he wanted to be an entrepreneur. That's when the whole idea about Cotton District started."

In the early 1980s, Camp began his career as a developer, focusing on land just west of the university near what was once a cotton mill.

"It seemed kind of crazy at the time," Ruby confessed, "What we know now as the Cotton District was a poor part of town, the way it usually is anytime you have a cotton mill. But he took it and made it into his famous Cotton District. Nobody else could see the potential. It was an undesirable area. But Dan could see what it could be."

"He took old property and made it new again," she said. "In some cases, it was restructuring old homes. In others, it was building something new. He could take a closet and make it into an apartment."

In re-imaging the Cotton District, Camp created an area in town that soon exerted an almost magnetic appeal to MSU students, drawn to his more than 300 residential properties and the nightlife and entertainment it spawned.

At the time, Spruill said, the saying around town was, "We would love the university even more if it wasn't for the students."

The Cotton District changed that, she and Ruby said.

"There's always some natural tension in these town and gown relationships," Ruby said. "What Dan did in the Cotton District really brought the two together like nothing before."

"As an innovative developer and as mayor, Dan Camp was a transformative figure in the town-and-gown relationship between Mississippi State and Starkville," Salter said in a statement. "The university community is saddened to learn of Mr. Camp's passing."

Education and the arts

Camp's commitment to the city went beyond his business enterprises. He served on the city's school board and was also a patron of the arts.

The city's "arts in public places" effort was birthed in the Cotton District where murals began to pop up featuring the work of talented artists, many of them on Camp-owned properties. The artwork added to the quirky charm of the area.

"Our city would be a lot more boring without Dan," Spruill said. "The Cotton District became a special place in the community. Love it or hate it, it's a unique area. Dan brought it to the table in his own creative way."

Camp's sons, Robert and Bonn, will take over their father's business, but it is doubtful either will ever be so bold as to assume the title of "Mayor of the Cotton District."

That honor will forever remain Dan Camp's alone to claim.