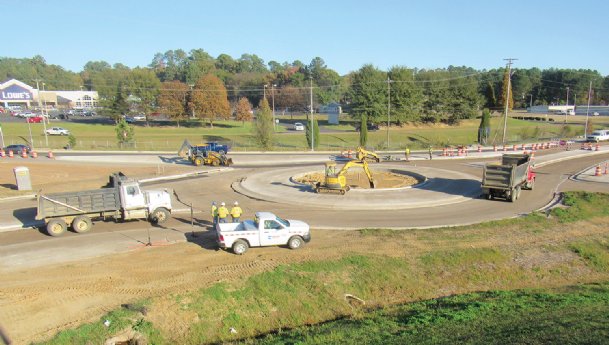 The semi-roundabout construction at the intersection of Military Road and Highway 82 is scheduled to reach completion by the end of November, project manager James Gill told The Dispatch. The construction was originally scheduled to be finished by May but was delayed by bad weather and pass-through traffic. Photo by: Slim Smith/Dispatch Staff 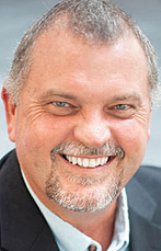 The roundabout construction at the intersection of Military Road and Highway 82 will be completed by the end of the month, project manager James Gill of Gregory Construction told The Dispatch on Wednesday.

The project, part of a $5.8 million traffic improvement project fully designed and funded by the Mississippi Department of Transportation, aims to build a pair of roundabouts beneath the highway bypass. Two-thirds of the funding -- roughly $3.9 million -- went to the roundabout construction, Gill said, and the remaining funds helped pay for a series of traffic improvements on 18th Avenue, which was completed in the spring.

In August, Gill told The Dispatch the project was scheduled to reach completion by Sept. 15. However, the process was significantly delayed because of how much traffic passes through the construction site every day, he said.

"The traffic coming through on the project just has slowed us down tremendously," Gill said. "It just hampers our construction when you've got traffic five feet from where you are trying to work."

MDOT closed the intersection partially Nov. 8 in order to facilitate the construction, The Dispatch reported. The highway ramps are still accessible, but traffic exiting Highway 82 can only turn right onto Military Road and cannot turn left to travel under the highway.

"I know (the closure is) inconvenient, but it's safe for our workers and the traffic flow to do that," Gill said. "Some of the curbs that we poured, some of the big trucks coming through there, they were running over and breaking it as soon as we would get it poured. ... It's nobody's fault, it's just so tight in there they don't have room to turn."

Now, the project is scheduled to reach completion by the end of November, Gill said, and the closure will likely last until next Wednesday. All that's left to do is some shoulder work, concrete paving, asphalt paving and some striping in the area, he said.

For those who are frustrated about the project, Gill said the end is near.

"Just be patient," Gill said. "Believe me, we want to get through as fast as they do."