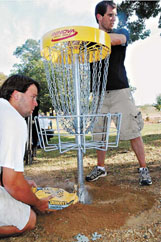 Local disc golf fan Kenneth Gustine holds a disc golf basket up straight while Chip Strain, president of the Whispering Pines Disc Golf Club, makes concrete for it to settle. They did this 18 times to make a new disc golf course at Propst Park Saturday.
Photo by: Luisa Porter

Get your Frisbees out and prepare to tee off.

An 18-hole disc golf course was installed Saturday at Propst Park. It''s not finished yet, but you can start practicing now.

Mark Box, a member of the newly formed Columbus Disc Golf Association, was on hand with several members of the CDGA to donate their labor installing the 18 metal baskets, which are suspended by chains from poles. He says tee boxes will be installed Oct. 30 and signage will follow to complete the course, but the public can begin play anytime.

The Columbus-Lowndes Recreation Authority put up $10,000 for materials and the CDGA is handling the installation.

Disc golf, as you may have gathered, is played under rules similar to traditional golf, but utilizes throwing discs. A player starts off from the tee box -- professional and amateur tees will be installed at each hole -- and attempts to get his or her disc in the basket with the fewest possible throws.

However, there are a few key differences, says Clayton Nash, 27, a professional disc golf player from Amory who is designing the Propst Park course.

"I try to challenge players with every hole, so I use trees as obstacles. Sometimes I''ll utilize a gap between trees," he said.

If that sounds unfair, consider that a skilled thrower can make a disc curve around a tree. That is, provided you have the right kind of discs. And no, Frisbees aren''t the same.

For now, you''ll have to travel to Lake Lowndes State Park or Tupelo to purchase a proper disc golf set, which includes driver discs, putting discs, etc. But Box is hoping the new course will help the sport will gain a foothold in Columbus.

"With the college in town, there are a lot of kids that play. I know of at least 25 guys in Columbus who go to Lake Lowndes to play," he said. "And one of the big draws is to attract tournaments. I would love to get a Sqwincher Open started. If we can get a sponsor to add a cash prize to the entry fees we can draw pros from all over to play."

Lake Lowndes, which has hosted tournaments for years, is currently completing its second course and will end up with 38 holes and Mississippi State University has a course. If West Point can get involved, Box envisions a Golden Triangle disc golf association forming, but the CDGA plans to walk before it runs.

That includes appealing to parents and children with an educational component. Innova Discs, one of the sport''s largest manufacturers, has a program called the Educational Disc Golf Experience, or EDGE, which integrates math and science curricula with disc golf by teaching concepts like diameter, flight patterns and environmental stewardship.

Box, a physical education teacher at Caledonia Elementary, has already purchased one EDGE package for his classes with nine traveler baskets and 60 discs.

Although it may sound simple, Box says disc golf is a legitimate challenge.

"I''ve been playing about seven months. When I first got into it I got some discs and went to a football field and started chunking them. I wasn''t very good. I could throw them about 25-30 yards at first," he said.

Short says the eight-acre course at Propst will center around the wooded area, but some holes will be in the open. Plans put the tee box for the 18th hole near the Columbus and Greenville train''s caboose.

The course was originally intended for the Burns Bottom soccer complex but was moved to Propst because there will likely be less foot traffic from non-players in the wooded area.