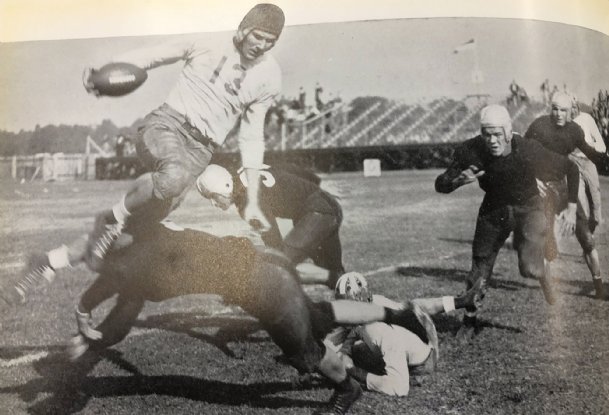 In a rivalry marred by absurd endings, Saturday brings the latest chapter of the annual Battle for the Golden Egg.

After the Southeastern Conference bumped the start of this season to late September coupled with slews of cancellations related to the COVID-19 pandemic, this year's 93rd edition of Ole Miss and Mississippi State's longstanding feud will not be played during the final week of the season for just the ninth time ever. It also marks just the second time in 119-year history of the rivalry that MSU will play two regular season games after the Egg Bowl.

The only other time it happened? 1936 -- a season in which MSU, then named Mississippi State College, snapped a decade-long winless streak to the Rebels and appeared in the school's first ever bowl game.

"It's only the Ole Miss-State college feud, fanned to life again by the autumn winds of late fall football," Reflector sports editor Hunter Cox wrote at the time. "But wotta game!"

'Just watch us down there'

The Mississippi State athletic department was in shambles when Mitchell Robinson joined the administration in 1932.

A Jackson native and former student at Augusta Military Academy, Millsaps College and, eventually, Mississippi State, Robinson previously served as a partner at Robinson and Julienne, General Insurance for more than a decade. With a keen business mind and a sharp, military-based way of thinking, he instituted stark changes in an MSU athletic department that was wrought with poor facilities, underfunding and dysfunction upon his arrival as the college secretary -- now known as the vice president of business affairs.

Robinson instituted The Athletics Board of Control, functionally a board of directors to control the athletic department and advance its deplorable conditions. He was also heavily involved in the hiring of Major Ralph Sasse as the school's football coach in 1935.

Having cycled through 17 coaches in 40 years of football, Sasse brought MSU a level of discipline and a proven track record of success. A graduate of the United States Military Academy, he saw active duty overseas during World War I, serving as a commander of the 301st Tank Division, earning the British Distinguished Service Order awarded to officers who performed meritorious or distinguished service in war.

A college friend of famed Tennessee coach Robert Neyland, Sasse returned to his alma mater as a math instructor and assistant football coach following World War I. Sasse was later elevated to head coach at Army from 1930 to 1932, compiling a 25-5-2 record.

"He was truly enthusiastic about the prospect being held out by the boys themselves, as he considered the material numerous and big enough to go places," Purser Hewitt wrote in the Jan. 22, 1935 edition of the Jackson Clarion-Ledger ahead of Sasse's hiring.

Officially hired on Feb. 4, 1935, Sasse met with boosters in the Delta during a basketball game between MSU and Delta State Teachers College to preach his vision for the program.

"Just watch us down here," Sasse reportedly said on his way from Fort Knox, Kentucky, where he was last stationed, en route to Starkville.

Sasse's squad rolled in his inaugural season in Starkville, finishing 8-3 for the first winning season at MSU in nine years.

While a 2-3 SEC record aided in holding the Maroons out of a bowl game in 1935, the team again sprinted out of the gate the following year, outscoring opponents 155 to 19 in the season's first seven weeks.

There were blowouts of Millsaps and Howard to open the year. A 68-0 win over Sewanee and a 32-0 victory over Loyola also ensued. Losses to Alabama and LSU, in which the Maroons were held scoreless, dampened 1936's rip-roaring start, while a 0-0 tie against TCU completed its 4-2-1 opening to Sasse's second season in Starkville.

Guided by "Chunkin'" Charlie Armstrong and co-captain "Chicago" Bob Keenan, MSU was a heavy favorite entering the 1936 Egg Bowl, despite the Rebels having won 10 of the past 11 rivalry games dating back to 1925 -- two years prior to the indoctrination of the Golden Egg trophy. The only non-Ole Miss Egg Bowl win in that span? A 7-7 tie in the 1929 edition in Oxford.

"The Johnny Rebs are said to have the power, but that power has failed to win any major contests," Daily Mississippian Sports Editor Billy Gates wrote on Nov. 18, 1936.

Before a Mississippi record crowd of 22,000 fans at Scott Field, where the Robinson-led athletic department previously unveiled a brand new scoreboard earlier that year, Ole Miss star running back Ray Hapes appeared for the Rebels. Suffering an injury two weeks prior, fans flooded Ole Miss head coach Ed Walker with telegrams from fans asking him to save him for the MSU game. Walker obliged.

"Coach Walker has been taking no chances with his Little star, Ray Hapes," Cox wrote. "'Tis said that the young man was kept on the sidelines partly on account of the many telegrams that the University coach received to 'Save Hapes for State.' And he did. We really appreciate it too. What a shame it would be not to have that little boy to practice our tackling technique on."

The ninth Battle for the Golden Egg saw offensive play stalled until late. MSU broke through when Fred Hight of Kosciusko flipped a pass to Chuck Gelatka to bring MSU down to the Ole Miss 10. Two carries by C.W. Steadman resulted in the Maroons' first score of the day.

Ole Miss responded when Herb Baumstein chunked a scoring pass to Dave Bernard for the Rebels' lone score of the contest, while Hapes was a minimal factor.

As crowd noise grew to a fever pitch, Sasse's MSU squad roared out of the third quarter break. Bernie Ward hit Ike Pickle for a touchdown reception. After an Ole Miss fumble at its own 8-yard line, Bob Hardison notched the Maroons' third score with a touchdown scamper of his own.

As the final whistle blew, MSU fans rushed the field in a scene described as "wildly jubilant" for Maroons fans and "somewhat dejected" the Ole Miss contingent.

"Armstrong's pass to cross netted the fourth and final touchdown and the hysterical crowd swarmed on the field a few minutes later to carry the victorious (Maroons) off the field and to bring the Golden Egg back to its rightful resting place -- Mississippi State College," Reflector Staff Writer Jimmie Robertshaw wrote.

Following the win over Ole Miss, MSU stomped Mercer 32-0 before earning its first ever victory over Florida a week later.

Capping his second season in Starkville with a 7-3-1 record, Sasse's team tentatively accepted a bid to the Cotton Bowl. Days later, Tennessee and Alabama both declined bids to the Orange Bowl, ultimately sending the Maroons to Florida for a date with Duquesne.

Touchdowns by Pickle and Fred Walters, the latter of which was a 40-yard reception from Pee Wee Armstrong of Meridian, put MSU ahead 12-7 in its first ever postseason contest. But as time ticked down, Duquesne tailback Boyd Brumbaugh connected with end Ernie Hefferlie for a desperation 72-yard touchdown pass, sinking the Maroons' hopes in South Florida with a 13-12 loss.

MSU finished its season 8-3-1 with all three losses coming by a combined 20 points.

Sasse would coach one more season at MSU before succumbing to a nervous breakdown that left him homebound. Dr. J.W. Eckford, Sasse's physician at the time, suggested he'd never coach again, leading the former Army man to resign from his coaching position following the 1937 campaign.

Started by Sasse's squad in 1936, MSU won six of the next seven Egg Bowls, in a tradition continued under Spike Nelson and Allyn McKeen. McKeen, who played for Sasse's old pal Robert Neyland at Tennessee, would guide the Maroons to the 1941 Orange Bowl, the second and only postseason appearance MSU would make until the 1963 Liberty Bowl. McKeen left the school as the winningest head coach in its history in 1948.

"The victory was decisive, smashing and more than made up for the disappointments of past years," Robertshaw wrote of the 1936 Egg Bowl.