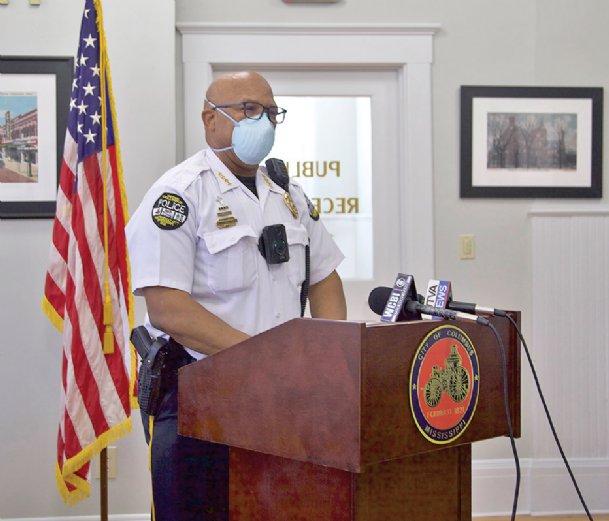 Columbus Police Chief Fred Shelton asks the public at a Wednesday press conference to comply with the city's mask mandate in light of recent spikes in COVID-19 cases and increasing complaints about violations of the order. "This is a public safety issue," he said. "People are actually dying from this COVID-19." Photo by: Yue Stella Yu/Dispatch Staff

Columbus Police Department is asking the public to comply with the city's mask mandate due to recent spikes in COVID-19 cases and a rising number of citizen complaints about violations, Chief Fred Shelton said at a Wednesday press conference at City Hall.

Violations have resulted in eight citations of businesses and individuals since Oct. 1, with a fine ranging from $300 to $1,000, Shelton said.

Shelton's reminder came on the day when Mississippi recorded 2,457 COVID-19 cases -- the highest single-day increase since the state's first case in March. The daily number of hospitalized patients statewide exceeded 1,000 on Nov. 29 and has remained high as hospitals struggle to provide enough beds for patients.

The Golden Triangle has seen more than 6,000 cases as of Tuesday afternoon, with 2,552 in Oktibbeha, 2,528 in Lowndes and 961 in Clay, according to the Mississippi State Department of Health.

"This is a public safety issue," Shelton said of the mask mandate. "People are actually dying from this COVID-19."

Faced with increases in infections, Gov. Tate Reeves implemented a statewide mask mandate Aug. 4 and allowed it to expire Sept. 30. In light of recent spikes, however, he has placed 54 of the 82 counties under mask mandate, including Lowndes, Oktibbeha and Noxubee counties.

Despite the expiration of the statewide mandate, Columbus has had an ongoing mask mandate since March 21. The original city order, Shelton said, was to require mask-wearing in public space and business employees to wear masks when interacting with customers. The city council passed a resolution in July expanding the original order to ask all employees and customers to wear masks, and Mayor Robert Smith issued a letter Oct. 1 to clarify the language of the mandate, Shelton said.

Relying on a complaint-based system, police officers respond to calls about customers or employees not wearing masks and try to convince them to comply with the mandate, Shelton said. If they refuse to put on a mask, they will then receive a citation and a court date when a judge will determine the amount of fines, he said.

Recently, the police department has seen a lot of complaints coming from customers and employees alike, Shelton said.

"(Citizens) are going to businesses and employees at the businesses are not wearing masks, and neither are they asking their customers to wear masks," he said. "... (In other instances) employees are complaining about their safety."

Entering the holiday season, Shelton said he also hopes people voluntarily comply with the law and opt for smaller gatherings.

"The smaller the (gatherings), the less chance there (is of) public infections," he said. "We want people to have a happy holiday season, but again, we don't want a spike in cases where people could die."

Additionally, the police will begin patrolling restaurants and bars today and cite those that serve alcohol between 11 p.m. and 7 a.m. -- a violation of a state executive order signed into effect Sept. 30 and set to expire Dec. 11, Shelton said. The fine will also range from $300 to $1,000.