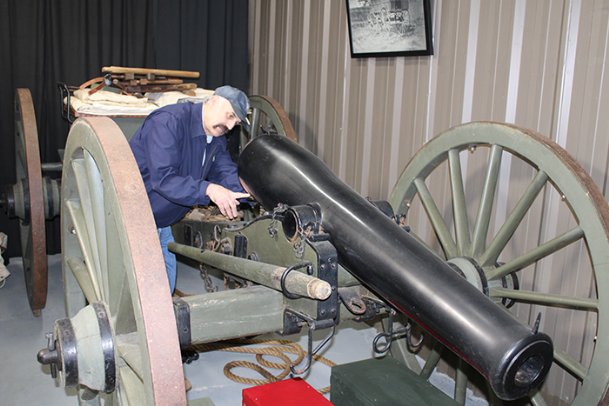 Duffy Neubauer inspects a replica Confederate Brennan 6-pounder cannon at his Starkville Civil War Arsenal on Thursday. Opened to the public as a museum in 2009, the arsenal includes models of every type of carriage, and almost every type of heavy artillery, used in the Civil War. Neubauer started a GoFundMe earlier this month to purchase a 24-pound Howitzer to add to the museum. Heâs trying to raise $150,000. Photo by: Zack Plair/Dispatch Staff

Duffy Neubauer built a replica of a Civil War-era wagon, using government specifications for the time period, that is displayed in his arsenal and museum. He stamped it with the logo of his great-great-uncleâs Wisconsin business, which produced those wagons for the U.S. Army during the war. âFor me to build one is just an old family tradition,â Neubauer said.
Photo by: Zack Plair/Dispatch Staff

A photo of Duffy Neubauerâs great-great-grandfather, Capt. Leonard Jaerhrling, is displayed inside the visitorâs center of the Starkville Civil War Arsenal. Jaerhrling fought on the Union side during the war.
Photo by: Zack Plair/Dispatch Staff

An authentic Confederate Reed 3-inch rifle cannon shell, left, and a U.S. 3-inch Schenkl shell, third from left, are part of the collection at the Starkville Civil War Arsenal. Lying to the right of each are exact replicas of the shell Duffy Neubauer cast himself.
Photo by: Zack Plair/Dispatch Staff

An addition to the Starkville Civil War Arsenal building sits virtually empty, with only construction materials scattered throughout the space that is scheduled to be finished this week.

Duffy Neubauer, the arsenal's owner and curator, already has the large new room filled in his mind.

He's acquired four fiberglass mannequin horses he plans to hook to a limber wagon carrying a cannon. Neubauer has five of the latter to choose from -- three American Civil War-era cannons most likely used in battle and true-to-specs replicas of two others -- sitting idle in other parts of his four-room arsenal.

The new exhibit, he believes, will "really give you the feel of what these carriages are all about."

"Without the horses to pull them," Neubauer added, pointing toward the cannons and carriages in an adjacent room, "all this stuff would be nothing but yard ornaments."

But to make Neubauer's developing addition complete to his liking, there's something specific he wants that he doesn't have -- at least not yet.

"I would love to hook it to a Howitzer," said Neubauer, 67, a retired facilities manager at Humphrey Coliseum on the Mississippi State University campus. "I know it's a long shot."

Acquiring a 24-pound field Howitzer (meaning it shoots a 24-pound projectile) would make Neubauer's arsenal the only place in the world where visitors could see models of every type of heavy artillery gun used, by both sides, in the Civil War. The arsenal, which he opened to the public as a free museum in 2009, already displays every type of field artillery carriage used in the war.

That's more than Neubauer can spare of his own resources, so he spent much of the last 10 months trying to find a donor, primarily approaching well-to-dos at Mississippi State University who have an appreciation for history and his museum. These prospective patrons found the price tag too steep, causing Neubauer to almost give up. But then a friend suggested he start a GoFundMe to crowdsource the effort.

Since launching the page Jan. 6, he's raised only $425 from five donors. But he's hopeful that time and exposure to his effort will generate more interest, and he will land what would be the "crown jewel" of his 45 years of collecting.

'If only they could talk'

No one else was there with him at the time, he admitted, laughing. But a fair share of visitors who have come through and signed the guestbook, where the opening date is printed, appreciate the symbolism.

"I had collected all this stuff, and I thought, 'What good is it if you don't share it?'" Neubauer said.

He has hosted visitors from 40 states and six foreign countries, treating them either to a generic tour of all the artifacts or one of 11 tailored programs focusing on a specific area of the Civil War, ranging from ammunition and sighting a cannon to the roles of artificers and artillery buglers. When a tour group arrives, he greets them in full character dress -- maybe a Union or Confederate soldier, a blacksmith or an ambulance driver.

Tours are by appointment only, by calling the number listed on the arsenal's website. He doesn't publish the museum's physical address.

"Before COVID, I was doing four to five tours a month on average," said Neubauer, who stopped giving tours last spring after the pandemic made it to Mississippi but hopes to restart them this spring. "During Christmastime, I might do four or five a day. One year, I was up here on Christmas Day for a tour."

His "hands-on" tours feature his three original guns -- an 1861 Parrott gun, an 1862 U.S. 3-inch rifle cannon and an 1863 Revere Copper Napoleon cannon, one of 500 ever made -- along with two replicas. He either built the carriages -- ranging from an ambulance, battery wagon and traveling forge to a six-mule wagon and funeral caisson -- or had them built elsewhere. All are exactly to government specifications according to contracts and drawings he has obtained from the period.

"This is all about storytelling," he said. "When you come through here, you see a gun that may have been used at the Battle of Bull Run and another that could have been fired at Gettysburg. When you're touching these guns, you think, 'If only they could talk.'"

Groups with the U.S. Grant Association hosted by the Grant Presidential Library at Mississippi State have made several pilgrimages to the arsenal. Relatives of Grant, himself, have even visited.

"People just love the programs," said John Marszalek, executive director for the Grant Library. "Duffy is first rate, and I think it's incredible what he's doing. If there's anyone who knows more about Civil War artillery than he does, I want to meet them."

Neubauer said he especially sees himself in the young people who come through the museum.

"I love to see their eyes light up when they see all the stuff," he said. "I guess one of my goals is, when some of these kids grow up and get their master's or PhD in history, and someone asks them how they became interested in all this, they'll say, 'We went out to this old man's shed in Mississippi, and that was the spark.'"

The spark, for Neubauer, came from several places.

The Watertown, Wisconsin, native lost his first toy cannon during a move when he was 3 years old. He saved his pennies and bought another one, then his dream became one day owning a cannon he could shoot. Then two. Then three. And so on.

His great-great-grandfather, Capt. Leonard Jaerhrling, served with the Union in the Civil War, piquing Neubauer's interest in that history from an early age. The covers and photo spreads in magazines he saw during the centennial of the war "cemented it," he said.

He started collecting operational model cannons in 1982 and bought his first original cannon -- the 1861 Parrott -- from a private collector in 1988. But his favorite "cannon acquisition story" unfolded about 20 years ago when he scored the 1863 Revere Copper Napoleon through good old-fashioned horse trading.

He first donated to a VFW hut in Monroe, Wisconsin, in exchange for its World War I-era cannon stationed out front. He traded that to the U.S. Army for an M60 tank that he then turned around and traded to a private collector for the Revere.

Neubauer earned degrees in education, not history, from The University of Wisconsin-LaCrosse and came to MSU as the assistant track coach in 1979.

Today, he lectures all over the state, attends Civil War reenactments at major battlefields and shoots his cannons in competitions.

His funeral caisson replica, built in Kosciusko, has participated in re-interments all over the country, including a sailor from the Hunley submarine in Charleston, South Carolina, and an unknown U.S. soldier from the Mexican-American War whose coffin washed up in Biloxi after Hurricane Katrina.

"I don't hunt or fish, play cards or golf," Neubauer said. "Every spare nickel I could get, I've put into this collection. ... I've had a wonderful life."

As many artifacts as are on display in Neubauer's museum, his newest find was still sitting in the back of his maroon van Thursday afternoon.

A family who owned a limber chest for -- you guessed it -- a 24-pound field Howitzer reached out to Neubauer to see if he could use it in his museum.

The chest is where soldiers would have carried the ammunition for the gun. A man from the donor's family apparently found it by the banks of the Tennessee River in 1910 and used it as a toolbox for decades before passing it down to relatives. In the family's search for the best home for the box, they came across Neubauer's museum.

Neubauer, at first, did not believe it was real. After he got it in-hand and realized it was, he did some calling around of his own -- to places like Shiloh, other museums and private collectors. It's quite possible, he discovered, the Howitzer chest is the only surviving one of its kind, giving him another rare and "neat" story to tell his visitors.

"Now, it would be great to have the Howitzer to go with it," he said.