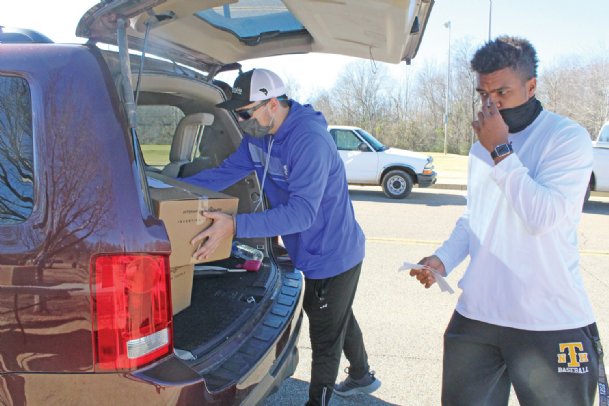 New Hope High School seniors Korey Green, 18, and Jeremiah Jethroe, 17, load boxes of personal protective equipment and cleaning supplies into the van of an area day care worker at the Lowndes County Soccer Complex during Martin Luther King Jr. Day of Service Monday. They were two of 21 volunteers who gave out 71 boxes of bleach, paper towels, garbage bags, disinfectant spray and cleaner, masks, gloves and hand sanitizer to day cares that registered with United Way of Lowndes and Noxubee. Jethroe is the son of Ronald and Michelle Jethroe. Photo by: Isabelle Altman/Dispatch Staff 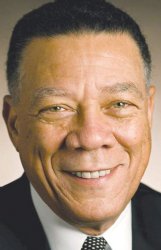 Despite the scaling back of some celebrations due to the COVID-19 pandemic, volunteers throughout the Golden Triangle commemorated Martin Luther King Jr. Day with a day of community service Monday. In Starkville, Anderson provided the highlight of the holiday during Mississippi State University's 27th annual MLK Jr. Day celebration, delivering a short message broadcast on the university's web-based TV channel.

"When (university) President (Mark) Keenum asked me to make some remarks about Dr. King, I couldn't turn him down," Anderson said. "Dr. King played an important role in my life. I first heard him speak when I was a student at Tougaloo College in 1962. I knew even then that I wanted to be a part of the civil rights movement."

When Anderson earned his law degree in 1967, he became just one of six Black attorneys to practice law in the state, carrying a law diploma to court with him at a time when many judges would not permit Black lawyers in the courtroom.

"I spent the first five years of my legal career as a lawyer for the NAACP Legal Defense Fund," Anderson said. "Dr. King was an inspiration to me and the leader of the civil rights movement for a couple of generations. He was a unique man in so many ways."

In 1985, Gov. Bill Allain appointed Anderson as the state's first Black supreme court justice, a position he held until 1990.

But during Monday's speech, it was another milestone Anderson seemed most proud of.

"I know 2020 was a difficult and challenging year for all of us," he said. "We've lost over 5,000 people in Mississippi to COVID-19 and it will probably get more difficult.

"But something happened in 2020 that was enormous and will impact all of our lives, especially for young people," he continued. "The leadership of our state -- the lieutenant governor and speaker of the House -- decided to pass legislation to take down the state flag that had the Confederate symbol and appointed a commission to select a new design to be presented to the voters."

Anderson was chairman of the nine-member commission, which chose a flag featuring the state flower -- a magnolia -- from among more than 1,500 submissions.

In November, voters approved the new design by a 3-to-1 margin and the Legislature officially approved the flag earlier this month.

The flag, Anderson said, is much more than symbolic.

"I grew up in Mississippi in the '40s and '50s, and throughout my whole lifetime, Mississippi has been at the bottom, whether it's income, education, health care, even though we have the greatest people, the most talented people, great poets and authors and musicians, the most fertile land, the Mississippi River and 90 miles of coastland," he said. "But we have always lingered on the bottom."

Anderson said the change of the flag represents a new start and brighter future for the state.

"When that flag is hoisted, people around America will know that we are an inclusive state and a welcoming state," he said. "Mississippi will ascend from the bottom, not in my lifetime, but in the lifetime of you students. So I'm going to ask you and almost beg you to please give Mississippi a chance. If we're going to get off the bottom, we need you and the education you have attained. Do it for your parents, for your grandparents, do it for any reason, but do it. Stay with Mississippi. Give us a chance."

While MSU's virtual MLK breakfast was the only speaker's event held in the Golden Triangle this year, planned day-of-service events continued.

In Lowndes County, the United Way of Lowndes and Noxubee, with the help of 21 volunteers, distributed 71 boxes of personal protective equipment and cleaning supplies to child care facilities from across the county. In Starkville, volunteers provided 100 food packages and 100 hot meals to people at the J.L. King Center.