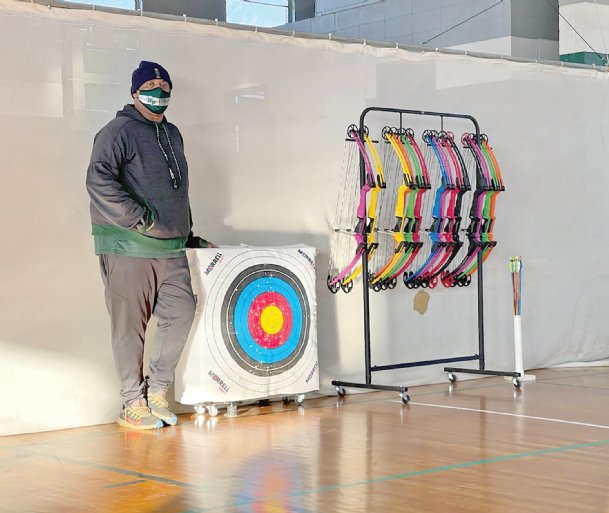 West Point archery coach Steve Cannon founded the Green Wave team four years ago out of a love for archery. The club is open to students in grades 7-12. Photo by: Garrick Hodge/Dispatch Staff

West Point High School senior Lidia Portera aims her bow at a target on Jan. 18. Porter has been with the West Point archery team since its inception four years ago.
Photo by: Garrick Hodge/Dispatch Staff

WEST POINT -- When West Point resident Steve Cannon first picked up a bow many years ago, he was aiming at bottle caps. It was almost love at first sight.

"One of my great friends and relatives introduced me to bow hunting," said Cannon, a 1993 West Point High School graduate. "Just teaching me my anchor point, shooting at a small bottle cap and making groupings around it."

Eventually, he wanted to give back.

"Four years ago, I saw some students here at Fifth Street that wanted to play sports, but there's not always a sport that can fit everybody here," Cannon said. "So I thought about it, and I thought, 'Archery.' That can be for anybody. You don't have to run, you don't have to lift no weights. So, every kid can't play baseball, swim or play football. But in archery, if you can pull a bow back, you have a chance."

West Point's archery team doesn't practice every day, only a few times a week at the Fifth Street Middle School gym. Cannon encourages athletes to play other sports if they want to, because he himself coaches middle and high school track in the middle of archery season, which runs January through late February.

"I was really excited when it first started, because I could play a sport and still have time with my animals. I ride horses, too," said West Point High School senior Lidia Portera, who has been with the team since its inception. "I really liked going to compete."

As long as they're willing to put the work in, Cannon said he'll train any interested student, regardless of their experience in archery.

From their first practice, each newcomer is taught the rules of archery matches: each contestant aims arrows at a target, with different rings on the target equaling different point totals. An archer can get a score between 0-10 points per arrow, with 10 points awarded for a bullseye, nine points awarded for a ring close to a bullseye, and so on. In AIMS, three flights of five arrows each (15 arrows total) are shot from 10-meters away from the target. Once those flights are complete, the archer moves to 15 meters behind the target to shoot another three flights. An individual's highest possible score is 300 points.

"If you're a fourth or fifth year shooter, you should be shooting between 250 to 300," Cannon said.

Cannon said the team currently has 24 current members. Through a combination of fundraisers and school funding, West Point has purchased enough equipment, about 16 bows and eight shooting targets, to accommodate each athlete, although some use their own equipment that meets AIMS regulations.

Like everything else, COVID-19 has impacted archery matches. Last week, the Green Wave faced Houston in what was the first of eight archery competitions (reduced from a normal slate because of COVID-19) scheduled for West Point this season. Because of the limited size of Houston's gymnasium, only 16 individuals from each school were allowed to compete. Furthermore, each participant had their own target, whereas in previous years they would share one with another archer.

"It is a little different, but I kind of like it being by myself shooting," Portera said. "But it's a lot of change."

As for Cannon, he's just thrilled he gets to keep coaching in uncertain times.

"I didn't know if we were going to have a chance to do archery or not, because it's one of the prime targets for COVID because the kids are (normally) standing so close together when they shoot," Cannon said. "All the coaches in the district contacted each other, finally AIMS said they'd let us shoot but there would be stipulations later on. It's pretty impressive how they've handled it."