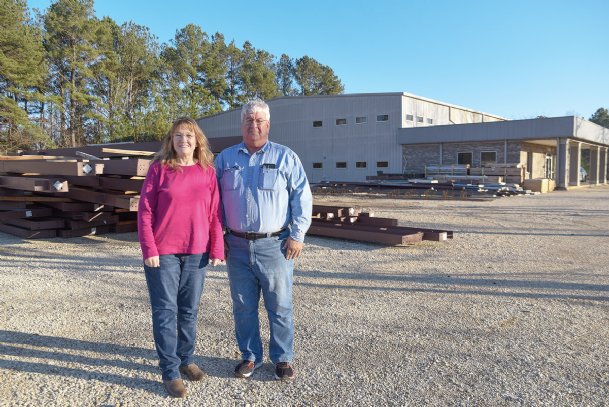 Judy and George East, owners of East Systems Inc. on Highway 69 in East Columbus, are eager for work to begin on an 11,500 square-foot expansion. The Easts received 10 percent of the cost of the $898,000 expansion from a grant from the Mississippi Development Authority. The Easts said the Golden Triangle Development LINK was essential in helping them navigate the grant process. Photo by: Deanna Robinson/Dispatch Staff

For almost a quarter-century, the husband-wife team of George and Judy East have been operating East Systems, Inc., an electronic components company in East Columbus.

It's been a pretty good partnership for the couple who grew up together in Houston, Mississippi. George is an electrical engineer while Judy is an accountant. It's a nice combination of skills.

"I make it and she pays it," George said.

Their expertise also provides a counter-balance that has tempered George's instincts for expansion against Judy's bottom line commitment.

For the past few years, that yin-and-yang relationship has been critical as they plot their future of the company they started in the garage in 1997.

Since 2000, the Easts have operated out of a facility on Highway 69.

From garage start-up to its own facility, the company has grown. This week marked another milestone for the company, one made at least partially possible from what the Easts once considered two unlikely sources -- The Golden Triangle Development LINK and The Mississippi Development Authority.

The Easts are expanding, thanks in part to grant money from the MDA facilitated by the LINK.

Until five years ago, the company focused on building control panels and electrical components for printing equipment.

Today, about half of their business involves building components for the mining industry, producing massive control panels and drives that weigh tons, where the complex wiring is measured in thousands of feet.

That is the future of their business, George is convinced.

As the demand grew for bigger and bigger panels, some weighing as much as 13 tons, George realized it was time to fish or cut bait. The company needed to expand to capture the business it needed to survive.

"I'm an accountant and I'm very conservative," Judy said. "(George) has been saying for the past two or three years that we really need to add on and I've been putting it off. Every time, I talked him out of it because it hasn't always been a glorious ride. We've had to use up a lot of our savings just to keep our doors open and our employees paid over the years."

Meanwhile, George said more and more contracts were slipping away because the company didn't have the capacity and equipment to build the massive components that would take the company to the next level.

George stated it pretty simply: Expand or let the company they had devoted their lives to slowly slip away.

"If you can't meet a customer's need, someone else will," George said.

"He kept telling me, 'If we are going to move forward and get this other work, we're going to have to add on.' I asked him what he thought it would cost and any time I ask that question, I always triple that number," she said. "But I understood what he was saying. I said to myself, 'I think I'll see if there's anything available from the (Mississippi) Development Authority.'"

By chance, the Easts' daughter, Hannah, had been a member of The Lowndes Young Leaders as a high school sophomore and had mentioned to her parents how much the group had enjoyed meeting with LINK CEO Joe Max Higgins.

A couple of years later, Judy recalled how impressed she had been with Higgins and decided to see if The LINK could help them land a grant from MDA.

"I had read articles about the money (MDA distributes) but I always thought we were too small for them to be interested in," Judy said. "So I decided to go talk to Mr. Higgins and the people at the LINK to see what they thought."

"I kind of thought we were way too small to get some kind of grant,'' he said. "Right now, we have 10 employees and (the LINK) is working on things with companies that have 450 jobs."

The Easts were surprised by their reception.

In July, Judy made her pitch to the LINK.

"They listened," she said. "They were responsive. Anytime I had a question, they were super helpful. They walked us through every step of the way."

In September, the Easts were awarded an $89,800 grant from the MDA. While it's a small grant by MDA standards it was a big deal to the Easts.

"That 10 percent grant really gave us the little push and encouragement we needed," George said.

Monday, concrete work will begin on the expansion and should be completed in a few months.

The expansion has already produced dividends.

Thursday, East Systems signed a contract for a job with an Alabama company that had had to pass on last year because they didn't have the facility to build the components.

"I've learned that you can't go from zero to 1,000 miles an hour overnight," George said. "You grow as the jobs grow. But this really gives us a chance to get those jobs."

Higgins said small businesses like East Systems may not always attract much attention, but are critical to economic development.

"These are local people with good-paying jobs," Higgins said. "That's something we want to promote. It's not always about these big industries. Folks like the Easts are very important, too."