Renovations to Fred's give nod to building's past 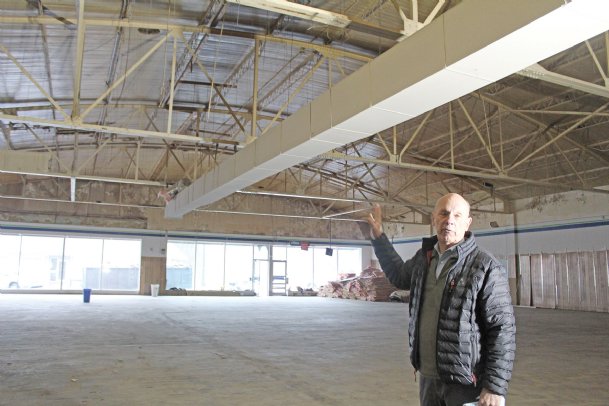 Jim Mauldin gestures toward the original barrel vault ceiling in the nearly 75-year-old building at 304 Fifth St. S in Columbus Thursday afternoon. Mauldin bought the building, which opened as a bakery in 1948 and most recently housed Fred's store, and knocked out the dropped ceiling that had replaced the barrel vault design to restore the building to its traditional look. When he finishes with other renovations he says will "tilt the hat" to the building's history, he plans to expand his storage unit business, U-store Inside, to the building. Photo by: Isabelle Altman/Dispatch Staff

Jim Mauldin shows Columbus Mayor Robert Smith the renovation plans he has for the former Fred's building in downtown Columbus Monday. Mauldin purchased the nearly 75-year-old building last month to expand his storage facility business, U-stor Inside, and plans to renovate the building to the way it looked when it first opened in 1948.
Photo by: Courtesy photo

Demetrius Billups and Christopher Harris, both of C.B. Harris Construction, demolish a wall that enclosed the back room of old Fred's store in Columbus on Thursday. After sitting empty since 2019, the building was purchased by local developer and business owner Jim Mauldin, the construction crew is now renovating it to turn it into a climate-controlled storage facility.
Photo by: Isabelle Altman/Dispatch Staff

Nearly two years after Fred's closed on Fifth Street in downtown Columbus, a construction project is underway to transform it into a storage facility with a building design that pays homage to downtown's history.

Jim Mauldin, owner of the storage business U-stor Inside, which owns EastGate Common storage facilities in East Columbus, purchased the building at 304 Fifth St. S. last month with plans to expand his business. A climate-controlled storage business is good to have near a residential area and major roads, he said, and now the downtown area doesn't have one nearby.

"There are lots of people who have downtown apartments, who have small houses on North- and Southside," he said. "... We're looking for everybody, but that's the market we're intending to be able to serve. So having the downtown community was a factor in us deciding to move to service this area, and we want to be part of that community also."

Mauldin said the plan currently is to put about 140 climate-controlled storage units in the building. C.B. Harris Construction of Columbus has already begun work demolishing the walls that made up the back rooms of Fred's to make more space for the units.

But Mauldin also plans to preserve and emphasize the building's history. Originally built in 1948, he said, the building housed Freeheart Bakery, owned by Richard Burnheart and Lon Freeman. The two divided the building with Fred's Discount Store in 1962, and by the late 1970s, the building was entirely Fred's convenience store. However, the Burnhearts' descendants still owned the building until they sold it to Mauldin in January.

The building was given landmark status by the Mississippi Department of Archives and History, which means Mauldin can earn state tax credits if he builds to the department's standards. He said he plans for the building to be reminiscent of when it was the bakery combined with Fred's. It will be called the Freeheart Building.

"We're going to restore (the building) back to a really good look that will be a good anchor for this corner and style, and still be able to (run) it as a commercial building," he said.

At the time it was built, the building had a high curved barrel vault ceiling, which Mauldin called "the most important architectural feature of the building." After Fred's took over, a dropped ceiling was put in, so Mauldin has knocked out that lowered ceiling and plans to clean the original and restore it to how it would have looked in the 1940s and '50s.

He also plans to install a material similar to the vintage pigmented glass that would have been part of the building at that time.

"It's a black ... 1920s vintage-style glass that goes around the outside of the window frames," he said. "That pigmented glass has broken over the years. You cannot buy it now. I found a company in Italy who makes a porcelain tile that looks just like it and that is what we are replacing that with."

Maulding said his timeline is between three and six months, depending on when he can obtain the tile.

"They don't make that every day of every year, so we are having to wait on that product to be made and shipped to America. So it could be July before we get it finished," he said. "We hope to be able to finish it earlier than that."

Mauldin credited the city officials, including Mayor Robert Smith who he said called him personally, for supporting the project.

Smith also personally reached out to management at the Fred's in 2019 after the company announced it was closing its Columbus location to try and save the business. He said he is excited to see a new development coming to the building after it sat empty for so long.

He added it's particularly good for Columbus that Maulding is renovating it to MDAH's historic standards.

"I think this is a big plus and an asset for the historic district," Smith said.

Mauldin said when the Freeheart Building opens for business, he will have framed on the walls newspaper coverage of the Freeheart Bakery's opening in 1948 as one more nod to the building's history.

"It'll be nicely lit, it'll be clean, it'll be fresh," he said. "It will have a tilt of the hat, as a commercial building today, to the way it looked when it was really in use back then."