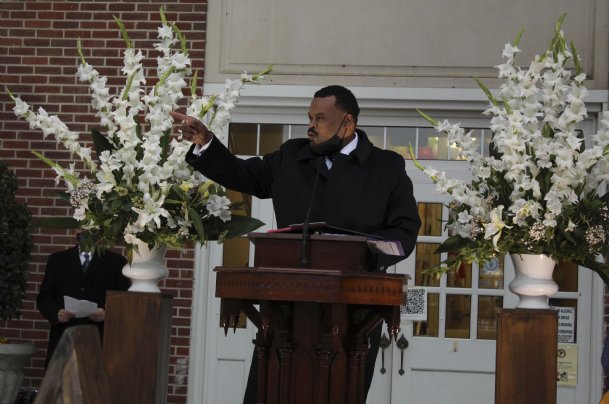 Mississippi Rep. Kabir Karriem (D-Columbus) points out the house of one of his teachers at Franklin Academy during Fridayâs bicentennial celebration. âAs we celebrate this 200th anniversary and unveil this monument, we must be vigilant in making sure that quality education remains key, free and accessible to all students,â Karriem said. Photo by: Theo DeRosa/Dispatch Staff

A monument to the 200th anniversary of the charter of Franklin Academy was unveiled in front of the school at Fridayâs bicentennial celebration.
Photo by: Theo DeRosa/Dispatch Staff

In the shadow of his former school, State Rep. Kabir Karriem stepped to the lectern and began to read the names.

"Do any of these names sound familiar?" Karriem (D-Columbus) asked a socially distanced crowd outside the front steps of Franklin Academy on Friday afternoon. "These are the names of the educators at this institution who, along with others, profoundly impacted my life as a child many moons ago."

Karriem, who attended elementary school at Franklin, was one of many dignitaries on hand along with area historians and Columbus Municipal School District representatives at the school's bicentennial celebration Friday. Franklin was officially chartered by the Mississippi Legislature on Feb. 10, 1821, becoming the first public school in the state.

Two hundred years later, the school is still in operation. As a medical sciences and wellness magnet school, Franklin serves 240 to 250 students from kindergarten through fifth grade.

But plenty has changed over the past two centuries as Franklin, Columbus and Mississippi have evolved and expanded.

"Over the years, the school has not only made history, but it has witnessed 200 years of accomplishments, challenges and, ultimately, change," said Mona Vance-Ali, archivist at the Columbus-Lowndes Public Library.

When Franklin was founded, Vance-Ali said, it was four years after Mississippi became a state. At the time, Columbus was part of Monroe County, and the first building constructed at Franklin was a 20-by-30-foot unsealed wood structure. In 1835, the one-room schoolhouse became two buildings, separated by a wall: one for males and one for females.

Additionally, Franklin was an all-white school until the Jamison and Doughty families integrated it in 1965, 11 years after the Brown v. Board of Education U.S. Supreme Court decision and nearly 150 years after the school's founding. A school for African Americans in Columbus was founded in 1869 and was christened Union Academy in 1874; three years later, it became a branch of Franklin Academy.

"It is really amazing how much education has changed from a lack of diversity in both sex and race to now a public system that allows everyone the same opportunity," said U.S. Rep. Trent Kelly, who represents Mississippi's 1st Congressional District.

It took until 1886 for Franklin to expand to a three-story brick building containing 14 rooms and a chapel. In 1918, the school became an elementary school with the founding of Stephen D. Lee High. The current two-story building was completed in 1939 by the Public Works Administration.

"Few institutions have withstood the challenges of change and time," Vance-Ali said. "Franklin Academy is one of those shining examples that has weathered the ups and downs and only stood stronger for it."

Vance-Ali told The Dispatch that the establishment of Franklin set the bar for other communities to begin their forays into public schooling in the state. Previously, most education was either through private schools or in-home tutoring.

"The concept of education being for all was relatively young and new even in the country," she said. "It really became a model for other schools throughout the state and was sort of at the forefront of a larger movement across the nation of opening up schools."

Chuck Yarborough, U.S. history teacher at the Mississippi School for Mathematics and Science, said downtown Columbus was laid out as 16th Section land in order to fund Franklin. He said the city -- at the time, a community of just 125 people -- had the financial incentive and moral imperative to invest in public schooling.

"Education has always been an economic development catalyst," Yarborough said.

"This was quite a daunting school for a little 6-year-old," McLean said, "but I'll tell you what: It certainly started my love of learning.

Lt. Gov. Delbert Hosemann delivered a video message to Friday's attendees to commemorate the bicentennial. Yarborough, Franklin principal Kennetra Smith and the CMSD board of trustees unveiled a stone monument in front of the school.

In her closing remarks, CMSD Superintendent Cherie Labat stressed the emphasis of providing multiple pathways for the district's students, such as going to college, entering the workforce or enlisting in the military.

"Education, in many ways, is the fundamental right of all students to grow, prosper and learn valuable foundations to prepare them to be proud citizens in this great state," she said.

Jacob Badcock came to Columbus as "kind of a weird Northerner from Wisconsin with a bit of an accent."

At Friday's celebration, the Columbus High School senior got a chance to deliver the welcome address and said attending CMSD schools had helped him in more ways than academically.

"If it wasn't for our great teachers, none of us would be who we are," Badcock said. "We wouldn't be where we are. We would have no direction in life -- not even a map to lead us.

"There are so many names to list, but at the end of the day, the Columbus Municipal School District, and especially Columbus High, has transformed me into a man dedicated to preserving and expanding the sacred truths we all hold so dear."

Fellow CHS senior Avani Poindexter has had a similar experience. Coming from a single-parent household, she said she was considered an "at-risk student," but she said she didn't want that to negatively define her academic accomplishments: participating in student government, sports and other leadership programs. Poindexter is dual enrolled in high school and college courses, meaning she can obtain her associate's degree by the end of her senior year.

"As we look forward to another two centuries of public education in Columbus and in Mississippi, I want to say thank you to everyone who has made the last two centuries possible," she said.