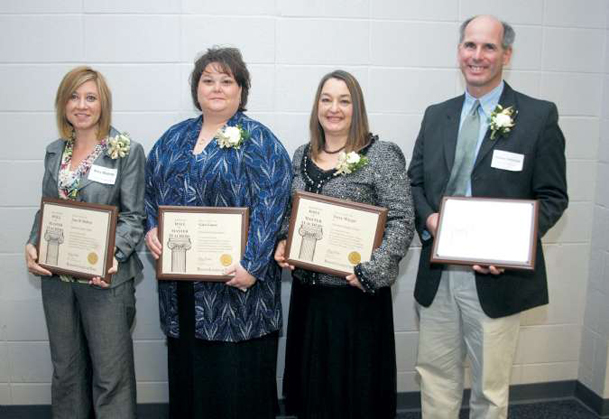 Entering her first year of school in Durham, N.C., Cindi Rigsbee was unsure of herself. She felt shy and awkward; a mop of dark, unmanageable hair only compounded the problem.

A couple months into the school year, the principal decided to divide the large class. Rigsbee and half the students were moved into a dreary basement classroom. But their teacher, Barbara Warnecke, brought the dark classroom to life and made every child, including Rigsbee, feel special.

Rigsbee went on to follow in Warnecke''s footsteps as an educator and later became the North Carolina teacher of the year.

"We have the responsibility, the honor of being somebody''s Mrs. Warnecke," Rigsbee told a roomful of teachers Friday, during a ceremony to induct the 2010 class of the Mississippi Hall of Master Teachers.

Rigsbee later was reunited with her first-grade teacher on national TV, and they continue to stay in touch. Rigsbee''s book, "Finding Mrs. Warnecke: The Difference Teachers Make," is about her literal search for Mrs. Warnecke and her search for that special teacher within herself.

Aside from numerous accolades and continued professional development, they al have one thing in common: the ability to actively engage students in learning.

Wiygul tries to instill problem solving and critical thinking skills in her students, abilities that will help them throughout life. She also takes a moment each day to look her students in the eye "and see if they have something to say."

Wiygul spent 10 years as a licensed practical nurse before later going to school to be a teacher and now, teaching advanced placement biology, AP physics and any other science she can get her hands on, Wiygul knows she found her calling.

"She possesses natural teaching ability and natural talent that are the mark of a master teacher," Wiygul''s school principal Randy Barnett wrote of her in his recommendation.

Guess said she "was chosen to be a teacher." "I just feel blessed and very fortunate that I was called to work with children."

Guess taught her own children at Greenlee Elementary School in Attala County. They now are in the seventh and 11th grade at Caledonia schools.

"Having children of your own changes the way you approach children in your classroom," Guess said.

More than 40 students in Guess'' class were chosen by the Mississippi Writing and Thinking Institute to record original writings for broadcast on Mississippi Public Broadcasting''s daily Rural Voices Radio feature.

Yarborough attributes his success in teaching to those who mastered the craft before him.

"I have been blessed to work with eight other inductees into the Hall of Master Teachers," Yarborough said.

A former student wrote in recommending Yarborough for the honor that he is starting his career as a high school teacher and hopes he can be half as much of a scholarly role model to his students as Yarborough has been to him.

Yarborough has gained vast recognition for the Tales from the Crypt program, during which students research the lives of people who lived in Columbus and bring them back to live with graveyard dramatizations.

Each of this year''s inductees have taught for 16 years. Teachers must teach for at least 15 to be eligible for the Hall of Master Teachers. MUW takes nominations in early spring, and nominees are vetted by professionals throughout the state.

Dr. Hal Jenkins also was recognized at the event. Jenkins, interim provost and vice president for academic affairs, is retiring.

"Forty years of anything is enough," he laughed, as he accepted a certificate of recognition.