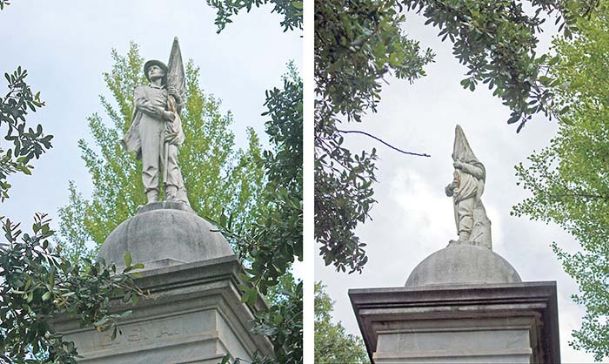 When viewed from the west, the Confederate monument at the Lowndes County Courthouse bears the image of a soldier carrying a flag, but when viewed from the east, the soldier takes on the image of a hooded figure normally associated with the Ku Klux Klan. Historians say there is nothing to indicate the unfortunate juxtaposition was anything other than an accident. Photo by: Zach Odom/Dispatch Staff

Like so many things, it all depends on how you look at it.

Quite literally, in this case.

On the corner of Second Avenue North and Fifth Street in downtown Columbus, a monument dedicated to the memory of Lowndes County soldiers who fought for the Confederacy rests on the lawn of the Lowndes County Courthouse.

When viewed as you approach the courthouse from the west, there is nothing particularly unusual about the monument. While there are monuments dedicated to the Civil War in the North, they are somehow less conspicuous than the Southern memorials, which tend to occupy places of prominence in town squares and cemeteries.

As one slightly baffled recent arrival from the North wryly observed: "Everywhere you look in the South, there are all these big, stone second-place trophies."

According to data compiled by the Mississippi Department of Archives and History (MDAH), there are 67 Confederate monuments in the state, not including those that are parts of battlefield memorials. Columbus is home to two of the monuments. The first, erected in 1894, adorns the section where the Confederate dead are buried in Friendship Cemetery.

But it is this second monument, erected in 1912 by the Stephen D. Lee, Chapter No. 34 of the United Daughters of the Confederacy, that has become something of an occasional conversation piece.

The focal point of the monument is a stone statue of a soldier bearing a flag in his left arm, standing on a domed tempietto of four Tuscan columns.

But if you approach the monument from the east, an entirely different image emerges.

"I know. I know," county supervisor Leroy Brooks says with a sigh. "You're talking about that Klan thing, aren't you?"

Viewed from the east side of the monument, the flag is suddenly transformed into something that people swear looks like a man whose face is obscured by the pointed hood of a Klansman.

Columbus Mayor Robert Smith said he gets occasional visits from people who have "discovered" the Klansman, too, but it is rare that anyone is so offended as to stage a fight to have it removed or altered, he says.

"We did have one gentleman, years ago, who was really upset about it, wanting something to be done about it," Smith said. "But other than that, no, I can't say it's something that people are really, really upset about in the black community. Some things just aren't worth fighting over, you might say, and this seems to be one of them. Besides, I tell them it's on county property, so maybe they should call Leroy (Brooks) or Harry (Sanders)." Brooks and Sanders are county supervisors.

In more than three decades as a supervisor, Brooks estimates 75 or more people have, "dragged me out onto the courthouse lawn and shown me that statue like they are showing me something new. There's no denying that it looks like a Klansman."

Brooks and Smith, both of whom are black, say the attitude in the black community tends to be more of "you just have to shake your head" amusement than outrage.

"I don't know that anyone has really tried to do anything about it on an organized level," Brooks says. "From my way of thinking, in my role as a supervisor there are things far more important to our community than a statue. Things like jobs and education, those are the things I'm prepared to fight for. It's always been my practice not to start a fight unless I know what the outcome is likely to be."

The question that lingers is this: Was the likeness of the Klansman an unfortunate accident? Or did the sculptor add the image intentionally as a subliminal message, as if to say though the Confederacy may have been lost, the idea of white supremacy has endured?

"I have heard people say that sort of thing about the monument, but I've never heard that from anyone who had an historical basis for it," says Columbus historian Rufus Ward. "Without seeing any evidence to that effect, I would tend to strongly doubt it."

Like Ward, Jim Woodrick of the MDAH doubts that the image of a Klansman was a deliberate act by the sculptor.

"Consider the time it was built," he says. "If the builders wanted to put a Klansman on a monument, I doubt they would have bothered being subtle about it. They would have just done it."

In a sense, the monument and it's accidental imagery stands as a pretty good metaphor for the South and its relationship to history.

The war that defined the South

Even 150 years later, the symbols and associations with the Civil War still resonate among many of today's Mississippians. Any effort to dispense with those symbols is met with stubborn defiance, something former University of Mississippi Chancellor Robert Khayat learned in his efforts to disassociate the Confederate Battle Flag from the school's activities. Khayat was convinced that the sea of "rebel flags" at Ole Miss football games, in particular, portrayed the university in a negative light. It was a tricky matter. Khayat knew the flag was a much-loved part of the school's tradition.

Making the change, he realized, would depend on a different tactic.

He succeeded through a cunning bit of subterfuge: The school didn't outlaw the flags, instead, it banned wooden sticks to which the flags were attached. It worked. No sticks meant no flags.

"One of the really interesting lessons I learned is how emotional people can be over symbols," Khayat said. "During my days at Ole Miss, I always found people are a lot more likely to get emotional about a symbol than the more substantive policy and academic matters, things that should have warranted far more of their time, thought and energy."

Among many white Southerners, the symbols of the Confederacy are a reminder of the bravery and sacrifice of the soldiers who fought for the South. They are to be honored, even if the cause for which they fought cannot be defended. The Civil War is part of our history and should not be forgotten. Where is the harm in that, they reason.

Yet it is equally understandable that black Mississippians are inclined to embrace a far different view of such symbols. Those who fought in the Confederate cause, had they been successful, would have perpetuated the horrific institution of slavery that is also an undeniable fact of our state's history. Who would want to celebrate that, they reason.

As Southerners, we remained strangely bound to the Civil War, black and white alike, often in the most subtle of ways.

And much like the statue on the corner of Second Avenue and Fifth Street, how we view it relies largely on our perspective.

3. Voice of the people: Paul Mack LETTERS TO THE EDITOR ([email protected])

5. Froma Harrop: How America got so inferior NATIONAL COLUMNS