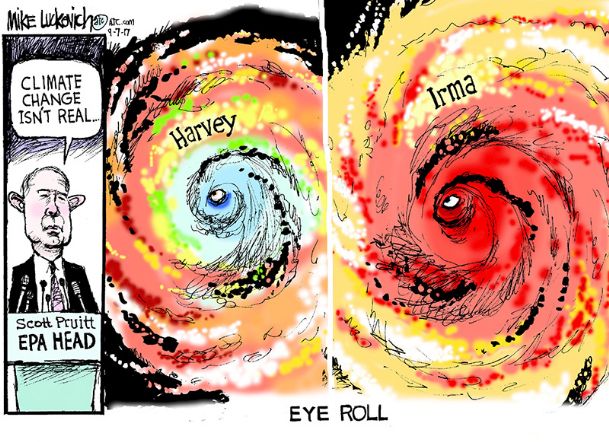 As if it were not bad enough that Houston is still drying out from Hurricane Harvey and South Florida is hunkered down in the face of Hurricane Irma, last week found the newly formed hurricanes Katia and Jose, respectively spinning in the Gulf of Mexico and whirling west across the Atlantic. We face multiple, simultaneous, catastrophes.

But it's not just their timing that has some of us watching weather maps with fearful speculation. It's also the record-shredding ferocity of the two storms that have so far impacted the United States. They've produced superlatives like a Donald Trump press conference.

Harvey dropped more rain on the continental United States than any storm ever has. At about the size of Texas, Irma is a behemoth, not to mention one of the strongest Atlantic storms ever recorded.

And the timing of them, combined with the historic awfulness of them, feels more sinister than simple coincidence, does it not? You find yourself wondering if this might not be a consequence of that inconvenient truth Al Gore has been warning about -- if, thanks to global warming, this is just a preview of our ghastly new normal -- record-breaking storms lining up like cars at a toll booth to take turns smashing the American coast.

Unfortunately for those of us craving clear cause and effect, the answer from scientists is a bit more nuanced. Asking if global warming caused all this is, it turns out, like asking if old age causes arthritis and bad eyesight. It doesn't, but it does make those things more likely -- and exacerbates them when they occur.

Not that everyone sees the same thing when they look at the weather map. Last year, right-wing radio host Rush Limbaugh said that hurricanes are actually part of a vast liberal plot. "It is in the interest of the left to have destructive hurricanes," he said, "because then they can blame it on climate change ..."

Limbaugh's lunacy reflects right-wing orthodoxy, which favors doing nothing in response to climate change on the theory it's all an expensive boondoggle designed to victimize innocent oil and gas companies. So you get Trump pulling the country out of the Paris climate accord and Florida Gov. Rick Scott forbidding his team to even use the term "climate change." Where the health of our planet is concerned, Republicans essentially ask us to make a wager that science is wrong.

Mind you, no one had trouble accepting science as authoritative last month when it predicted to the very minute a solar eclipse that darkened a great swath of America. But the eclipse threatened no one's money pot. Global warming does. So conservatives pretend science is somehow suspect when it says the planet is warming because of fossil fuels. And we should accept it as just -- What? Coincidence? -- that the fossil fuels industry donated $55.1 million to the Republicans in 2016 alone?

That money is a wager against our one and only planet. And that feels especially obscene on a day when much of Houston is navigable by boat and a monster storm is bearing down on Florida. Nothing to see here, say the climate deniers. Everything is just fine.

Is that dangerous, delusional, and irresponsible? You bet your life.

No, actually, they do.

Leonard Pitts is a columnist for The Miami Herald, 1 Herald Plaza, Miami, Fla., 33132. Readers may contact him via e-mail at [email protected]