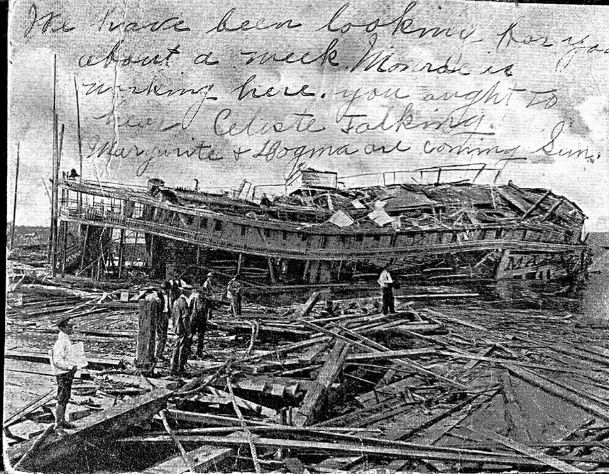 In 1906, a hurricane wrecked many of the steamboats in the Mobile River system trade. As a result, the Tombigbee River trade was badly damaged. Soon a shipwreck of political making may wreck tourism in Columbus. Photo by: Courtesy photo

Shipwrecks are never a pretty sight. In 1906, a hurricane blew through Mobile, Alabama, and destroyed many of the steamboats that ran on the Mobile/Alabama/Tombigbee River system. As a result, the Tombigbee River trade was badly damaged. In the past, other than commemorating historic events, I have avoided commenting on current events in my column. However I see a bad shipwreck about to occur and feel a need to give my two cents worth.

As of Friday when I am writing this, it appears the City of Columbus is intent on shutting down the Columbus-Lowndes Convention and Visitors Bureau and diverting its funding to other programs. It is sad what the smell of money will do to otherwise good people. In working on history projects in Mississippi and in other parts of the country, I have over the last 10 years seen Columbus' reputation for history and architecture develop from regional to national. This can be directly attributed to the hard work of the CVB.

We have all seen the negative comments some have made about schools and crime in Columbus, but on the national scene a different picture has appeared. The New York Times has told the story, in a full-page feature, of Columbus' role in Memorial Day. USA Today has included the story of the Whitehall Mint Julep in an article, The National Trust for Historic Preservation has named Columbus a national Distinctive Destination for historic preservation tourism and I could go on.

People would be amazed at the nationally and internationally prominent people who, under the radar, have toured historic homes and neighborhoods in Columbus. The Golden Triangle Development LINK and the CVB present a picture of a vibrant place where you would want to live or open a business while local government is now presenting a picture of turmoil.

The tourism tax the city now wants to go completely under the control of the city council was created as a sales tax at restaurants that would go toward the CVB increasing tourism and thereby increasing city revenue. It has worked but the CVB may now be a victim of its own success. The last figures I recall were from 2016 when tourism generated about a $118 million impact on Columbus' economy on tax revenue of about 2 million. That's a big bang for the buck.

There is another problem though, the CVB board was set up to take politics out of the giving of grants. Funding and assistance is provided based on merit and community benefit. Last year, 168 local groups and organizations received funding or assistance. A long list of community events are helped, such as the fishing and soccer tournaments that fill local hotels. There is the Pilgrimage and the Juneteenth celebration that bring thousands to Columbus. There have been events celebrating the Queen City Hotel and honoring historic figures ranging from Disney animation director Josh Meador to Boxing legend Henry Armstrong.

Politicians, though, are not given money to fund campaign style neighborhood events and they do not like that.

Columbus can follow the lead of Winona, after whose legislative act the Columbus act is patterned, and divert the tourism money to parks and recreation. That is badly needed in Columbus, but the purpose of a tourism tax is to bring people to Columbus who will spend money boosting the local economy. What is proposed by the city amounts to a back door way to change a tax that pays for itself through positive economic impact and turns it into a new general revenue tax. The new proposal does set the funds up in a special account but it is still available for the city council to spend almost any where it wants and not for tourism.

If the CVB is shut down, then years of national relationships that have been established and cultivated will be lost. If tourism and promotion is cut back, then the numbers of people coming to Columbus will decrease. If tourism were to decrease even just by 40 percent, that could be an almost $50 million economic loss to the community.

I have both worked with the CVB on projects and had them help me. I am totally impressed with their skills, imagination and ability to one day work with a small local organization and the next day impress a national figure with what a gem Columbus is.

It was exactly 100 years ago that an article in Collier's Weekly Magazine wrote about the lack of a preservation ethic in Columbus and stated it was "hoped that someday the people of Columbus would be sufficiently enlightened" to realize the value of what the city has. We are close to losing one of the best things Columbus has going for it and in the process take the spending of a huge sum of public money from a non-political board and give it to a bunch of politicians. I wonder if the tens of thousands of dollars in private grants given to help build a children's museum will be refunded to those who gave it for that specific purpose or will the city in an example of bad faith try to keep the money.

As for me, if the City of Columbus has no interest in history and tourism then my column is pointless. Why try to tell stories of history that are tied to people and places and promote tourism if the city plans on cutting promoting cultural heritage tourism. I have enjoyed writing a weekly history column, but with the city's apparent attack on promoting its history and heritage, both black and white, it is pointless to continue writing about Columbus. I see a shipwreck coming, and until after further reflection, this will be my last column.

1. Our View: Closing the barn door after the cows have gotten out DISPATCH EDITORIALS

3. Voice of the people: Bill Parker LETTERS TO THE EDITOR ([email protected])