Ask Rufus: Tales to be told 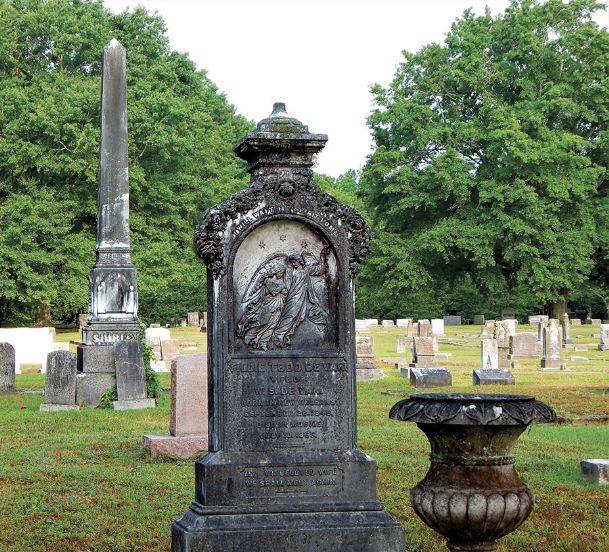 There is symbolism to be found in the old monuments of Friendship Cemetery. The urn in the foreground represents human mortality as does the Egyptian obelisk in the background. On the headstone in the center is an angel lifting the deceased to heaven. Photo by: Courtesy photo

Recently I have been working on a project that involves Friendship Cemetery here in Columbus. The twists and turns of that research while exploring and looking at the cemetery and its monuments in a different light brought to mind one of my favorite quotes. I believe it was Sam in J.R.R. Tolkien's "The Lord of the Rings" who in "The Two Towers" said: "I wonder what sort of tale we have fallen into."

Friendship Cemetery, which was originally called Odd Fellows Cemetery, is an old, beautiful and peaceful cemetery established by the Independent Order of Odd Fellows in 1849. Its 65 acres contain about 22,000 graves including two military sections with over 2,100 Confederate soldiers who died in or on their way to hospitals in Columbus. Somewhere also are the graves of unknown Union soldiers, as 40 were said to have been buried there but only 32 were removed to the national cemetery at Corinth in 1867. It is also the final resting place of a number of notable people.

The oldest graves in the cemetery were moved there from older cemeteries and include early settlers such as William Cocke. Cocke was a friend of Thomas Jefferson, with whom he corresponded about Franklin Academy, Columbus and Mississippi's first public school. Cocke had fought in both the American Revolution and the Creek Indian War/War of 1812. He was Tennessee's first U.S. senator and was a sometimes friend, sometimes enemy of Andrew Jackson.

Also buried there is A.B. Meek, a prominent poet and writer of the mid-1800s.

Meek wrote a poem, "Balaklava," honoring the bravery of a fateful charge of the British Light Brigade at the Battle of Balaklava. The poem initially won high praise, and it was said that Queen Victoria was so moved by it that she had copies printed to be distributed to the public. However, the poem was eclipsed by, and took a back seat to, Alfred Lord Tennyson's now immortal poem, "The Charge of the Light Brigade."

Among the many others whose stories are worth retelling are Augustus Jones, Clyde Kilby and Josh Meador. Jones froze to death when the ill-fated Steamer Eliza Battle caught fire and burned on a freezing, flooded Tombigbee River in 1858. Kilby corresponded with and wrote biographical books on C.S. Lewis and was an editor for Tolkien. And Meador was the head of Animation Effects at Disney Studio during the golden age of Disney. Meador shared an Oscar for special effects in "20,000 Leagues Under the Sea" and for 29 years was the person who made Disney's animated characters come alive.

The list of the fascinating people resting at Friendship Cemetery could go on and on. There are so many stories and tales to be told there.

There are also thousands of memorials and monuments spread across the cemetery. Many of the older monuments are stories in themselves. The styles and images they present often have specific meanings. Among popular symbols found on headstones are flowers such as roses, which represent grief and condolence, and lilies, which represent the resurrection. Lambs are often found on children's graves, as they symbolize innocence and the Good Shepherd.

Other popular symbols include broken columns which represent sorrow and the loss of a pillar of the family or community. Doves can represent purity or symbolize God's messenger. A dove in flight portrays the soul's journey to Heaven. A wreath of ivy symbolizes Christian victory over death. Clasped hands represent a handshake of farewell. Urns, which often appear on top of monuments or free standing, are an ancient representation of human mortality.

Among the most popular monuments or images are those of angels. The angel can have several different meanings. It can symbolize a guardian or a messenger of God or represent sorrow over the loss of a loved one. They are popularly associated with the graves of children.

Logs or a broken tree trunk also represent sorrow and especially sorrow over the death of a prominent family member still in his or her prime.

And of course there are crosses everywhere.

Adjoinging the Confederate section in the middle of Friendship is the Jewish Cemetery. There one finds monuments containing the Star of David and Hebrew inscriptions.

Friendship Cemetery is a beautiful, peaceful setting that is overflowing with stories both known and forgotten. Sometimes stories, such as the cemetery's role in Memorial Day, have elements both known and lost. In my recent wanderings there I have seen fascinating monuments with tales pleading to be told. Hopefully some of these tales can be rediscovered and retold.

In many cities old historic cemeteries have become popular places to walk. One of the most famous of those cemeteries is Congressional Cemetery on Capitol Hill in Washington. I have walked there, and while Friendship Cemetery cannot match it for famous names, it overwhelms it in beauty.

4. Voice of the people: Angela Jones LETTERS TO THE EDITOR ([email protected])