Partial to Home: A son returns to his musical roots 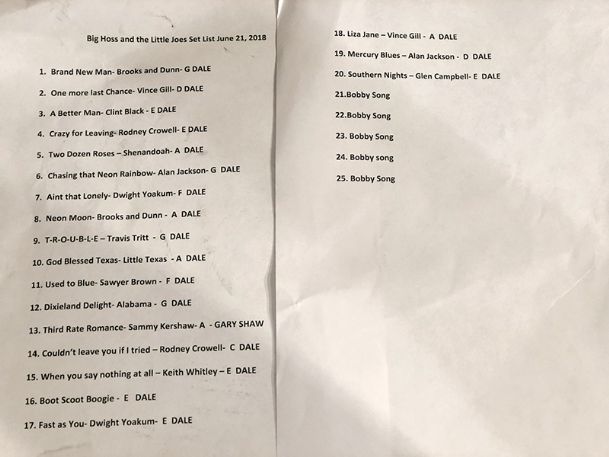 It was too much to get into a single photograph, the scene in front of us.

Maybe it can be done with words. By us, I mean Beth, several friends and about 300 or so women, men and children, all undeterred by a late-afternoon summer rain, all there to hear music on what turned out to be an unexpectedly cool and lovely evening.

We had come with folding chairs, blankets, skateboards, beach balls and in the case of one fellow, an air guitar, to hear Dale Robertson's band, Big Hoss and the Little Joes, at Thursday's Sounds of Summer at Riverside Park.

Mother Nature did her part, providing an orange sky, which, at one point, could be seen through sections of the bridge above masses of blooming crepe myrtles.

"It was just such a neat feeling getting that cool air off the river," Robertson said afterward. "That's an amazing venue, a mini amphitheater, that hometown picnicky feel."

Robertson's band, Mike Chain, Raymond Miller, Gary Shaw and Bobby Shannon, filled the center section of the bridge. Though this was their first gig as Big Hoss and the Little Joes, these guys are accomplished musicians, who have played with each other in local bands for decades.

When Robertson told a younger co-worker that the hardest part of forming a new band is figuring out a name, the co-worker came up with the reference to "Bonanza," the popular TV show from the 60s and 70s.

"It was one of Dad's favorite shows," Robertson said. "It was a show I watched with him."

Robertson's late father, Gene, owned the Playmore Club near the Alabama line from 1979 to 1996. When the lead guitarist for Gene Robertson and The Echoes, the Playmore's house band, left for Nashville, Gene asked his 17-year-old son to fill in.

"I told him I'd give him two weeks," Robertson said. The year was 1984. Dale played country music with the Echoes until 1992. About two months after he began at the Playmore, Robertson's dad hired Grand Ole Opry fiddler and Aliceville native Jim Brock. His efforts to match Brock's level of playing made him the musician he is today, Dale said.

OK, so you have the bridge and the band and the brilliant sky and the crepe myrtles and the silvery river. Below, on a cement strip, at the foot of the stairs leading to the stage, there was another show. A guy with shoulder-length hair who looked to be in his 40s, played an air guitar the entire two-hour-long concert. Mother Goose danced with children. Stephen and Freida Burt danced ballroom style. A mother danced with her small child. A little girl cartwheeled along the edge of the crowd. A couple of pre-teen boys took turns with a skateboard.

People visited, drank beer, ate pork rinds and rolled beach balls with their kids. Near the end, a misting rain thinned the crowd. When it was over, as we walked to our cars, one of our group said, "Big Hoss and the Little Joes has made me a country music lover."

For Robertson this was not just another gig. For the first time he would be fronting a band that played country music, the music his late father loved. As do most sons, Robertson longs for connection with his father.

In his home, next to the American flag used in his father's funeral, Robertson has kept one of Gene Robertson's cowboy hats. Thursday evening, the son took his father's hat and put it in the car with his guitar. Dale had never played a gig wearing a cowboy hat and later would laugh about hitting the mic with its brim several times during the performance.

Robertson left the hat in his car during rehearsal. About five minutes before they were to begin, band member Raymond Miller turned to him and said, "Dale, get the hat."

Robertson put on his father's white cowboy hat as he walked to his place on stage. For the first time he looked out. Scattered throughout the crowd were people who had heard his father play.

Robertson stood and let the moment wash over him.

Then he whispered something.