Partial to Home: Avalon, my hometown 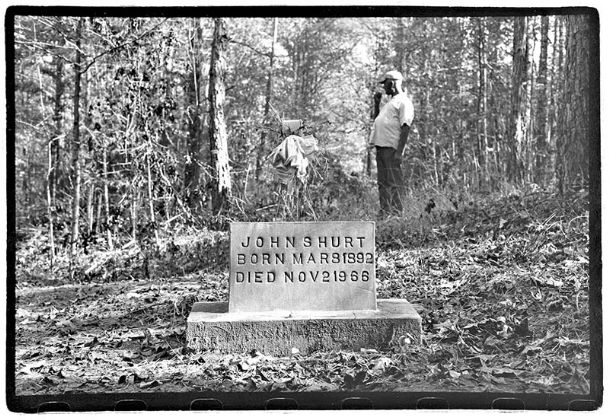 This photograph, taken in the mid-1970s, pictures the grave marker of Delta bluesman Mississippi John Hurt. Hurt, whose music has been covered by musicians as diverse as Bob Dylan to Doc Watson to Jerry Garcia, is buried in Saint James Cemetery near his hometown of Avalon, Mississippi. Photo by: Birney Imes/Dispatch staff

"When I became school age, my mother sent me to St. James School. Later William H. Carson started courting my teacher. He was a guitar picker (and) he would spend the weekend nights at my mother's home. I wasn't allowed to bother with his guitar. I would wait until he went to sleep, then I would slip his guitar into my room and try to play it. (That is how) I learned to play guitar at the age of 9 years old. After that my mother bought me a second-hand guitar at the price of $1.50. No guitar ever had a more beautiful sound."

Sometime in the mid-1970s, I got in my car and drove to Avalon, Mississippi. While I was by no means a blues aficionado, I loved Mississippi John Hurt's music, and Avalon was his hometown.

"Avalon, my hometown, always on my mind

Pretty women in Avalon want me there all the time."

Hurt's songs have a lightness, a musicality ... and then there is that voice, clear, rich, complex, like a strong, dark coffee.

By the time he was 14, Hurt was playing country dances and private house parties. In a photocopy of a handwritten two-page document titled "Life Record Document," supplied to me by the Carroll County tax assessor (more on that in a minute), Hurt writes he was working "very hard" on a farm near Avalon. He made recordings for the Okeh label in '28 in Memphis and New York City. And then, as was the case for many blues musicians who stayed home rather than move to the cities, his music fell into obscurity.

Hurt was "rediscovered" in the early 60s by two researchers who convinced him to move to Washington D.C. His performance at the 1963 Newport Jazz Festival fueled his rise to prominence and resulted in appearances on the Ed Sullivan Show and the Johnny Carson Show. He was among a handful of bluesmen -- Big Joe Williams of Crawford, another one -- part of the Greenwich Village folk scene.

I don't remember much about Avalon. I went not knowing, but hoping to find some vestige of the bluesman who had lived most of his life there and died a decade earlier. A local offered to take me to his grave.

Avalon is in the northwest corner of Carroll County, the eastern two-thirds of which is in the hills and is where the county seat, Carrollton is located. The western edge is in the Delta. St. James Cemetery, where John Hurt is buried, is in a woods on the slope that separates the hills and the flat Delta.

My guide directed me to a dirt road that led to the graveyard. I don't remember much about the setting, only that Hurt's tombstone was easy to find. I took a few pictures, then returned my guide to Avalon.

A couple weeks ago, on the way home from visiting friends in the Delta, I stopped in Carrollton to take a break. Traveling west on Highway 82 toward Greenwood, the turnoff to Carrollton comes just after that long, rolling descent into the Delta. The small town, several miles north of 82, is arrayed around a courthouse, and is storybook charming.

So there I was on the courthouse square fiddling around with my cell phone camera when a smiling, paint-splattered guy wearing an orange T-shirt stopped his truck and asked what I was doing. The fellow was about my age and exuded a good-natured curiosity.

Meet Wilton Neal, tax assessor of Carroll County going on 40 years. Neal launched into a history of the town and went on about a speech given by a village elder on July 4, 1984, the 150th anniversary of Carrollton. He offered to send me a transcript of the speech and a CD of it being delivered.

Last week I received from Neal a local-history care package that included the promised transcript and CD, a CD of him whistling and singing and a photocopy of a two-page document written in a shaky hand and signed "Mississippi John S. Hurt." Click here to see the document.

"If you don't know John Hurt, look up on YouTube," Neal wrote.

I phoned Neal immediately. He told me he'd helped Hurt's granddaughter in her efforts to preserve her grandfather's home and church as a memorial to the bluesman. No surprise he had her phone number.

Mary Hurt, 59, is a Chicago schoolteacher, who has made it her life's mission to preserve her grandfather's legacy after a visit to the House of Blues during a school field trip. There she saw a mural featuring her grandfather with incorrect information. Frustrated by the response of the management of the blues club, she has since created a museum in Avalon and each Labor Day weekend organizes a homecoming in his honor.

"What was he like? Oh, he was the kindest, most gentle man I ever met in my life. I never heard him raise his voice," she said. "He would never tell us to 'sit down.' He would play his guitar (and sing) 'sit down, children.'"

Mary, who grew up in Mississippi, describes herself in her early years as "one bitter little girl."

"My whole objective for going to school was to get out of Mississippi," she said. "The racism I saw and the way my grandfather was treated made me hate that state. I vowed never to come back."

She said the outpouring of affection for her grandfather and his music has changed her attitude about her native state. "All of the people, white people from all over the world, people from different generations, different cultures -- some of them couldn't even speak the language -- they all cared for his music.

"Daddy John's music has changed my life. I do believe music is the panacea for any illness, any racism, any cultural division. It is colorless. It talks about one thing, one race, the human race."