Partial to Home: A single photograph, a glut of memories 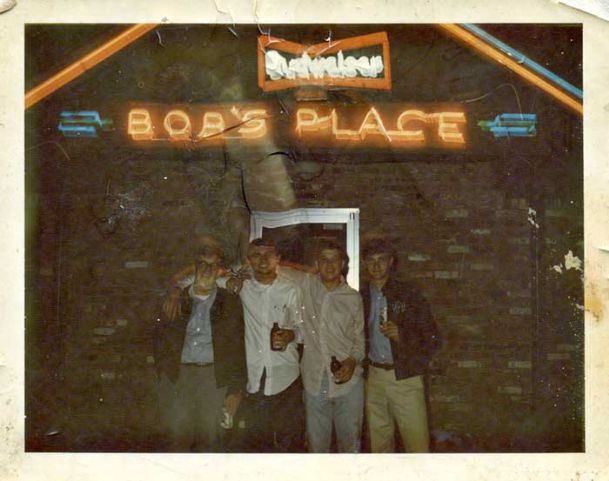 The dirt from the parking lot cast a yellow hue outside like the yellow of an old photograph ... underneath the hue was the fluorescent light within set off by neon beer signs, old brick walls, vinyl booths, Aunt Barbara's rouge and Boo Boo's blue eyes.

Rufus Ward called one day last week about a picture of Bob's Place, the now-mythical drive-in that was the high-school hangout for generations of Columbus teenagers.

Rufus (Lee High, Class of '68) has been charged with having T-shirts printed with an image of Bob's for his 50th class reunion in October. He wanted to know if it was okay to reproduce a cartoon-like drawing the late Uncle Bunky made of the place for The Dispatch to go with a March 1996 feature.

Bunky's mother, "Aunt Barbara" Williams, ran Bob's from 1963 until 1975, when she retired and sold the business to John Hawkins. Barbara's parents, Bob and Eva Thweatt, opened the restaurant around 1918. Originally, Bob's was located at the fork of what are now Island and Port Access roads. Then it was the fork of Highway 82 and Old Macon Road.

After a fire in the 1930s, the Thweatts moved their restaurant next to the river bridge that's since been restored and is now part of the Columbus Riverwalk.

Many a plot was hatched at Bob's. An article written for The Dispatch by George Hazard on the occasion of the demolition of Bob's recounts how B.C. and the Cavemen, a local rock band that flourished here in the early 60s, came into being on the patio of Bob's.

I happened to be at Bob's the night Henry Barnhill proposed jumping the train to Artesia that stopped on the trestle about 9 each evening. There was impromptu drag racing on Old Macon Road. In those match-ups Henry was wont to race his father's Rambler Classic, an automobile decidedly not meant for such. There were fights in the parking lot and plastic bags containing iced six-packs of Schlitz.

I didn't mean this to be a jaunt down memory lane, only to bemoan what scant visual record remains of a place so vivid in so many memories.

Back in the 90s, when we were writing about Bob's, a lone snapshot taken of the place surfaced. Like pictures of blues legend Robert Johnson, who for decades it was thought no photos existed, images of the hallowed hangout are scarce.

Rufus has seen a photograph of his cousin, Marcella Billups, sitting in a car with a 1940 tag in Bob's parking lot (in those days "nice" girls didn't go in Bob's).

Such was still the case 25 years later when Beth's date left her in the car on Bob's gravel parking lot while he went inside, as it turns out, to drink a beer. Along comes Beth's older brother, Ryan Hickel, and Bobby Patrick. Big brother went inside and saw date drinking beer. Without comment, he returned to the parking lot and told little sister to get in his car, she was going home.

I don't remember how I came in possession of the battered snapshot. It's a small color print, probably sent to a lab by a local drugstore. The picture is not well lit. Four boys, their arms on each other's shoulders, beers in hand (three Pabst Blue Ribbons and one Budweiser), all wearing button-down shirts and chinos, face the camera smiling.

Surely other pictures of Bob's Place exist, but maybe not. In this day and time when people are photographing everything they do, including the food they eat, it's difficult to imagine puberty without selfies, or for that matter, cell phones.

This sounds like an old fogey, but I'm glad we didn't have them, cell phones. Instead of texting, we were jumping into boxcars headed to Artesia. Instead of Facebook, we were whiling away the hours on the patio overlooking the Tombigbee. Instead of video games, we had pinball machines (that paid off). Instead of streaming audio, we had a three-tunes-for-a-quarter jukebox.

Instead of Siri, we had Boo Boo and Aunt Barbara.

Here's a memory from that time, the summer of 1969. That spring Joe Shelton, Taddy Dean and myself had graduated from high school. It was late at night. The three of us had just returned from the Gulf Coast. We weren't expected home, so we parked at a gravel pit west of the river, off Old Macon Road.

That fall we would be going our separate ways, and our worlds would change in ways we couldn't imagine. We sat at the gravel pit in the car and, for most of the night, talked. We talked about ourselves, each other, our beliefs, our aspirations. There were no cell phone interruptions, just the sounds of a summer night and the voices of friends.