Partial to Home: Pied piper with a harmonica 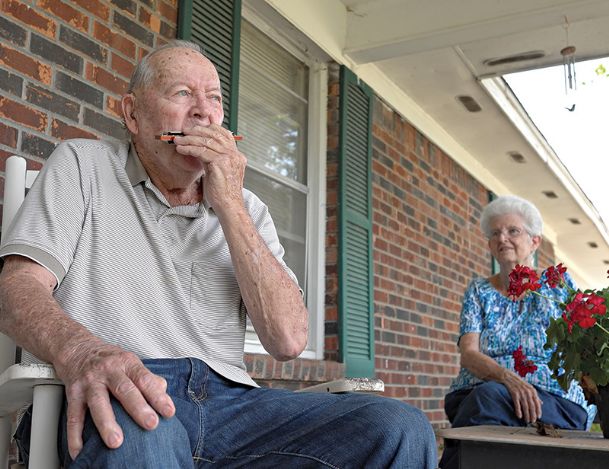 Bob Fussell plays âAmazing Graceâ with his harmonica on his front porch Saturday morning while his wife, Ann, looks on. The 86-year-old Fussell often gives impromptu performances with the instrument in Kroger and the West Point Walmart while shopping with his wife. Photo by: Birney Imes/Dispatch Staff

Someone was playing a harmonica in Kroger the other day. I was punching in my customer number at the auto-checkout when the music started. The tune was "This Old Man":

"This old man, he plays one,

He plays knick knack on my thumb.

With a knick knack paddy wack,

Give a dog a bone.

You hear something out of context, and it takes a minute to sink in. I stopped what I was doing and listened, still looking at the screen, thinking about what a pleasant, if not odd, sensation it was, live music amid the clang and clatter of a grocery store.

Finally, I turned and just behind me an older man in a wheelchair was serenading a small child held captive in her mother's grocery cart. The child was mesmerized; the mother, seemingly oblivious to the magic taking place an arm's length away, was seeing after her groceries.

Afterward, I introduced myself to Bob Fussell and asked if I might visit with him sometime about his harmonica playing. He agreed, but when I asked for his phone number, he mumbled something and reached for his wallet.

He was apologetic as he fumbled through his billfold. "During the war all I did was listen to Russian Morse code," he said. "I can't remember numbers."

Fussell, 86, grew up, the youngest of seven boys, in Germantown, Tennessee, then a country town. His first six years of schooling took place in a two-room schoolhouse where, except for the winter months, he went barefoot.

One of his older brothers got a harmonica. "After the other six got it, it came to me," Fussell said. He was 8-years old and the music just flowed through him effortlessly.

"You Are My Sunshine" and "The Birmingham Jail" were the first tunes he played.

When asked about the latter tune, Fussell broke into song:

"Write me a letter,

Send it by mail

Send it in care

of the Birmingham jail."

We were sitting in the living room of the small brick house Fussell and his wife Ann live in on Highway 12 near Columbus Christian Academy, the three of us.

Ann was talking. She was a Caledonia Wiggins and an assistant to dentist Roy Griffin, whose clinic was upstairs above The Dispatch.

I asked Bob if he courted Ann with the harmonica. He answered with a song:

"Her hair was red; her name was Hannah.

She was her daddy's only daughter.

We got married on the Tennessee border.

One night I took her just across the line;

I picked her up in my pickup truck

She broke this heart of mine."

"That's what he sang to me when we met," Ann said.

When I noted it must have worked, she, not missing a beat, said, "We've been married 62 years."

After high school Fussell played junior college football until he flunked English and got kicked out of school and was drafted for the Korean War. Fussell scored high on a military I.Q. test and was sent to "code school" in Massachusetts for six months.

He was dispatched to an outpost in northern Japan where for the next five years he would listen 12 hours a day to Russian Morse code. Not surprisingly, while in Japan, Fussell bought a harmonica. There was a schoolhouse near his base and one day Fussell stopped and played the harmonica for the school children there. It became part of his routine.

As he told the story, Fussell began singing a child's song in Japanese.

Most everybody was going to the beer joints, and I just enjoyed the kids," he said.

"I loved the Japanese people," he said. Fussell speaks a rudimentary Japanese.

After the war, Fussell moved to Columbus to work with his brother Slim who was working to keep afloat the then-nascent Columbus TV Cable. He courted Ann while they lunched under the company's tower off Ridge Road.

Fussell gives his impromptu harmonica concerts at Kroger and the West Point Walmart where, not long ago a woman and little boy gave him $5. When Fussell tried to refuse the money, the mother and little boy insisted he keep it.

"Kids can be crying and wanting something, and he won't say anything. He pulls out that harmonica," said Ann. "They quiet right down."

Clarification: Apparently, the lament expressed in last week's column about the lack of photographs of Bob's Place was unnecessary. Readers have consoled me with news of three Facebook interest groups where one can find pictures of the fabled high-school hangout: "Bob's Place," "The History of Columbus, Mississippi" and "You Might Be From Columbus, MS, If You Remember."

3. Voice of the people: Jerry Fortenberry LETTERS TO THE EDITOR ([email protected]OM)