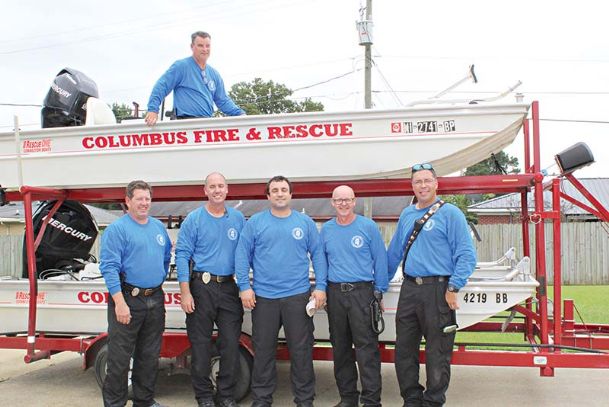 A rose to the Columbus Fire & Rescue Swift Water Rescue team, which again answered the call by traveling to North Carolina in the wake of the devastating flooding caused by Hurricane Florence. The team, which also helped out with rescue efforts in Florida after Hurricane Irma last September, joined rescue teams from throughout the country after last week's storm. The CF&R team sent to North Carolina included Battalion Chief Shannon Murphy, Capt. Melvin Junkin, Capt. Chip Kain, Capt. Wes Mims and engineer Marco Rodriguez, all of whom have had extensive training for precisely these kinds of emergencies.

A rose to Columbus restaurateur and pit master Hank Vaiden, who again demonstrates that there are many ways to aid those who are affected by natural disasters. As he did last year when he joined others in Houston to provide meals for victims and emergency worker in Houston, Texas, after Hurricane Harvey, Vaiden joined other expert barbecue chefs in North Carolina this week as part of Operation BBQ Relief, a nonprofit effort to provide meals to displaced residents and emergency personnel during disasters. It was formed in May 2011 to feed tornado-stricken victims and responders in Joplin, Missouri. When OBR deploys, members from competitive barbecue-cooking teams around the country give of their time, skill and dollars to provide what comfort they can.

A rose to the new class of the Columbus Mayor's Youth Council, which was introduced this week during a ceremony held at the Trotter Center. This year's class includes a record-number of members -- 54 -- from high schools throughout the area. Over the next year, the students will perform community service projects while being exposed to various aspects of government. Making the connection between community service and elected office reinforces the message that the people we elect to office are very much public servants whose main duty is to serve. Groups such as the Mayor's Youth Council and Young Leaders programs in Lowndes and Oktibbeha Counties are an opportunity to develop and inspire our top young students and provide them with experiences and learning opportunities that will serve them well, not only as students but as community-minded citizens. Have a great year!

A rose to Columbus native Chris Lytle, whose path to national prominence in the cooking world is a year ahead of schedule. Last week, Lytle, who now lives in Vernon, earned a trip to the Steak Cookoff Association National Championship in Fort Worth, Texas, by out-cooking his opponents in a regional competition in Corinth, with his perfectly-prepared medium-rare rib-eyes. A long-time competitor, Lytle, 36, had set a goal of reaching the national championship next year, so he's ahead of schedule. We wish him every success in the national championship, which will be held Oct. 4-7.