Partial to Home: Nothing sheepish about these Algomians 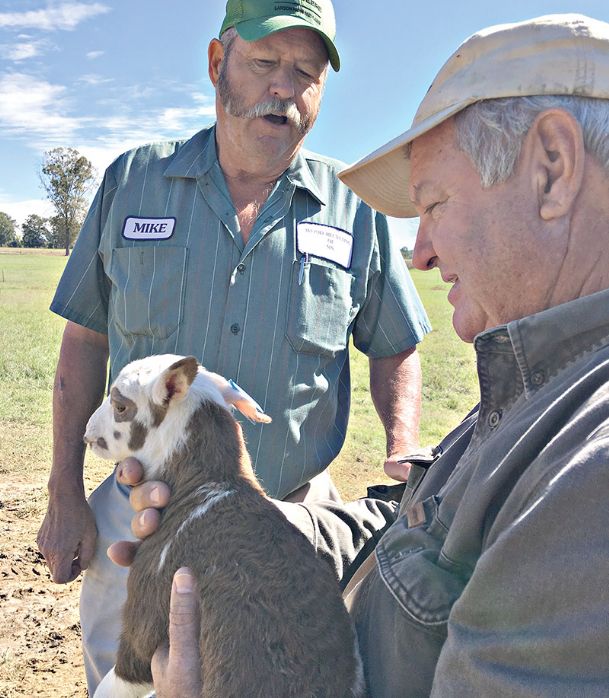 Mike Westmoreland talks with Johnny Wray about his sheep farm operation in Algoma Thursday. Wray, who buys sheep from Westmoreland for his farm in Clay County, holds a newborn lamb that has been separated from its mother. By dayâs end the mother and bleating lamb were reunited. Photo by: Birney Imes/Dispatch Staff

Five of us are sitting at a round table with a vinyl, checked tablecloth. Mike and Clyde are eating bologna-and-cheese sandwiches on white bread. Johnny is having chicken-fried steak with white gravy and Don and I are having chicken wings, he with fried onion rings, me potato logs.

Ketchup, vinegar pepper sauce in a Mason jar and a fiery, locally made hot sauce are the available garnishments.

The only fresh vegetable in sight is a crate of tomatoes on a shelf of groceries under an oversized TV tuned to the Mossy Oak channel where camo bedecked hunters are shooting waterfowl. Every time I look at the TV, another black Lab is braving icy waters, struggling to gain purchase on a just-slain duck.

A little boy, cheeks bulging with candy, was standing at the counter of a country store buying more.

A man standing nearby said, "Boy, you gonna kill yourself eating all that candy."

The little boy replied, "Grandpa lived to be 99."

"No," said the little boy, "minding his own business."

The table erupts after each joke. Each seems funnier than its predecessor.

A patient recovering from throat surgery tells his nurse he needs a cup of coffee. The nurse refuses saying the coffee would do harm to his throat.

The patient persists. Finally, the nurse says she could give him a coffee enema. After a pause, the patient agrees.

As the nurse administers the enema, the patient goes, "Oooooooh!"

"No, too sweet," says the patient.

Algoma is a rural outpost of about 600 in Pontotoc County, located about half a dozen miles south of the Pontotoc. The big news of the day seems to be the closing of The Progressive Shoe Store, a Pontotoc institution where generations of Ole Miss students bought saddle oxfords and Bass Weejuns.

I've come here with Johnny Wray, who raises grass-fed beef, lambs and free-range chickens on his farm in Clay County. Also along is Don Schutt of Indianapolis, an old friend of Johnny's, who comes down each year ostensibly for the Welty Symposium, but who seems just as delighted by the opportunity to get his boots muddy feeding chickens and helping Johnny with chores.

Johnny buys his lambs from Mike Westmoreland, 66, an out-sized character, who for much of the morning has toured Johnny, Don and me over his 185-acre farm in a dusty Kubota four-wheeler. The farm is home to about 400 lambs and their offspring.

Westmoreland raises Katadins, a "hair sheep" (as opposed to wooled sheep). Though developed in Maine, the breed thrives in our climate.

Most of the sheep cluster around scatterings of sweet potatoes at the edge of a 15-acre hardwood forest. This is sweet-potato country. This flock feasts on the culls.

Up until five or six years ago Mike raised beef. Prices got high and he sold his herd. He bought a dozen lambs from a friend in Thaxton and promptly fell in love.

"My favorite thing is the babies," he says. "They play out here like a bunch of children."

He stops the four-wheeler and retrieves a new-born separated from its mother. It's easy to see what he means. Johnny holds the lamb as we bump across the field in search of its mother. Finally, Mike puts the lamb in the middle of a group. It's rebuffed by one nursing mother.

Not to worry, says Mike. He'll either find an accommodating wet nurse or his mother will find him. Late that afternoon, to allay Johnny's concerns, Mike phones with news the lamb and mother were reunited.

Dogs play a key role in the operation, both as guards and herders. The flocks are protected by dogs that are mixtures of Komondor, Great Pyrenees and Anatolian. Then there is Rosie, the English shepherd, who alone can round up the entire flock of 400-plus and bring them to the barn.

Before it's over Mike sells Johnny a puppy, an adorable fluff that will ride with me in the back seat back to High Hope Farm. On the way back we discussed possible names. As of this writing the female pup is unnamed. Don thinks "Mike" is a good choice. Seems like a fine choice.