Possumhaw: The way it was 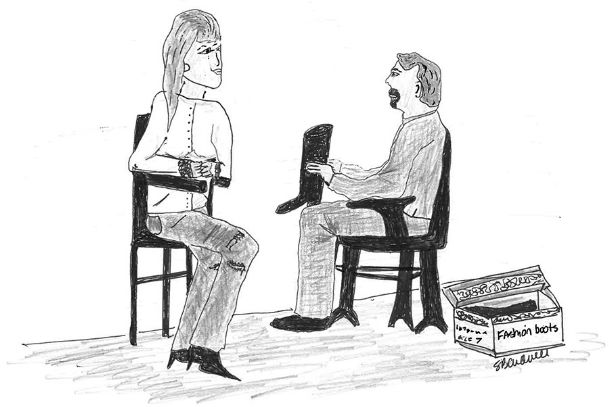 "The look he shot her was incredulous in the extreme. 'You have a filing system for your shoes?'"

from "Guarding Suzannah," by Norah Wilson.

"Give a girl the right shoe and she can conquer the world."

Over coffee one morning Sam and I were discussing shoes; maybe I was more discussing and he was listening. I expressed my concern there were so few shoe stores.

"Remember when you had stand-alone shoe stores as well as department stores with shoes?" I asked. "Remember when you walked into the shoe department, someone waited on you while you perused the shoe displays? Then the salesclerk sat you down, measured your foot, disappeared behind a curtain, and came back with the mate to your selection?"

Then Sam proceeded to tell me his shoe story, a story that I never-ever tire of hearing. Sam's brother, Bobby, was five years older than Sam. Bobby had a paper route. It was a cold, rainy day and time for Bobby to collect his paper money. Sam was probably 10 years old at the time. They called on a lady who asked them to step inside where it was warm while she collected her purse. Sam was left standing on the heated floor grate like houses had back then.

Bobby got his money and the boys started to leave, only Sam couldn't move. His shoes had melted to the grate. Bobby pulled Sam toward the door, detaching him from the grate. Sam says it turned out to be a good thing because the plastic shoes his mother bought at Gibson's Store had no tread and afterwards, they had tread.

When I was young, we had play shoes and Sunday shoes. In high school I had one pair of Bass Weejuns and refused to give them up, even when they were worn out. An internet search reveals you can still buy Weejuns.

I do like shoes, especially comfortable shoes. It's just sometimes I miss the ways things used to be. My last shoe shopping venture there were two people working the cash registers. There were 20 people in line waiting to buy shoes. I stepped up to ask for the mate to my shoe selection; the saleslady said I'd have to wait for the 20 people to pay. My lip actually quivered. I couldn't get the shoe myself and there was no one to help me. The salesladies were very nice and eventually I received my shoe. My friend said, "Why not just order them on the internet? You can always return them."

It saddens me a little -- the world is changing and in so many ways we are less personal. I can check my own groceries, send them to the house, or pick them up in the parking lot. I can order anything from a pair of socks to a car on the internet.

I guess the bright side is if we spend less time waiting in line, we can spend more time lingering over a cup of coffee, remembering and laughing again and again at our old stories.