The permanent exhibits at the Tennessee-Tombigbee Waterway Museum are well worth seeing. The mock up of the pilot house of a modern Tombigbee River towboat traveling down the river is one of the more popular exhibits among both young and old. Photo by: Courtesy photo 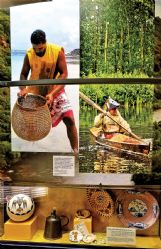 The Smithsonian Institution's Water/Ways exhibit, which has opened at the Tennessee-Tombigbee Waterway Museum, "explores the relationship (between) people and water."
Photo by: Courtesy photo

The history of the Tombigbee River is the history of Columbus. It is because of the river that Columbus was founded and much of Columbus' economic development today is related to the river. The Smithsonian's Water/Ways exhibit examines the relationship of people and water.
Photo by: Courtesy photo

The exhibit focuses on the importance of water and how almost everything we do has some connection to water. The exhibit actually merges into the existing exhibits in the museum, sometimes making it difficult to distinguish between the museum's exhibits and the Smithsonian's.

Rodrigo Rangel, private secretary to de Soto, recorded an account of the expedition's arrival at the Tombigbee, probably in the Columbus area. He wrote "The river of Chicaca (Chickasaw) they found overflowing its banks and the Indians on the other side in arms with many white flags" (but they were not flags of Surrender).

Though Tombigbee actually was taken from a Choctaw phrase, it was the Chickasaws who first gave the river a recorded name. The Chickasaw called it the "Ming-oo aye-u-py Ok'Hin-nah" or King's Bath River. Edward Fontaine, a draughtsman in the Pontotoc Land Office in 1848, explained that the Chickasaws believed that the flooding of the Tombigbee was caused by the Great Spirit taking a bath. Fontaine also said that the Choctaw called the river "Itte-ombee-eye ika-abee" or wooden box making river. That was to commemorate learning how to construct boxes in which pelts could be shipped during the French fur trade of the 1700s.

In 1805, Mississippi Territorial Judge Harry Toulmin wrote that the Choctaw called the river "Elome-gabee" or "Box Maker's River" after a box maker who formerly lived on some of its headwaters. Other accounts related that the river was named after a creek near Eppes, Alabama, on which a Choctaw box maker lived. It was there that in 1736 the French built a fort they called Fort Tombecbe.

Whatever the real story, the French apparently named the river after a Choctaw word for box maker that they interpreted as Tombecbe. That evolved under the English into Tombeckby and then Tombigby and finally the present day Tombigbee.

The Agnes Zaiontz Tennessee-Tombigbee Waterway Transportation Museum has permanent exhibits telling the story of the Tombigbee River, its importance in the development of Columbus and its importance today in regional economic development across Kentucky, Tennessee, Mississippi and Alabama. Those exhibits merge with the Smithsonian's interactive Water/Ways exhibit which "explores the relationship (between) people and water."

As good as the Smithsonian exhibit is, the Tennessee- Tombigbee Waterway museum is by itself well worth seeing. One of its most popular exhibits is the mock up of the pilot house of a modern Tombigbee River towboat. It was funded by Parker Towing of Tuscaloosa and is based on one of their boats. Assistance with the display was also provided by the U.S. Army Corps of Engineers. Three cameras were mounted in the pilot house of a Parker towboat which recorded the boat's journey down the river. Screens in the life size pilot house replica provide the visual experience of traveling down the river on a real towboat.

The museum is open during business hours Monday through Saturday and admission is free. The Smithsonian Water/Ways exhibit will be at the museum, which is located at 318 Seventh Street North, from Jan. 25 through March 8. For more information or to schedule a group tour, call 662-328-8936. The exhibit is a collaborative effort of the Agnes Zaiontz Tennessee-Tombigbee Waterway Transportation Museum, Mississippi Humanities Council and the Smithsonian Institution.