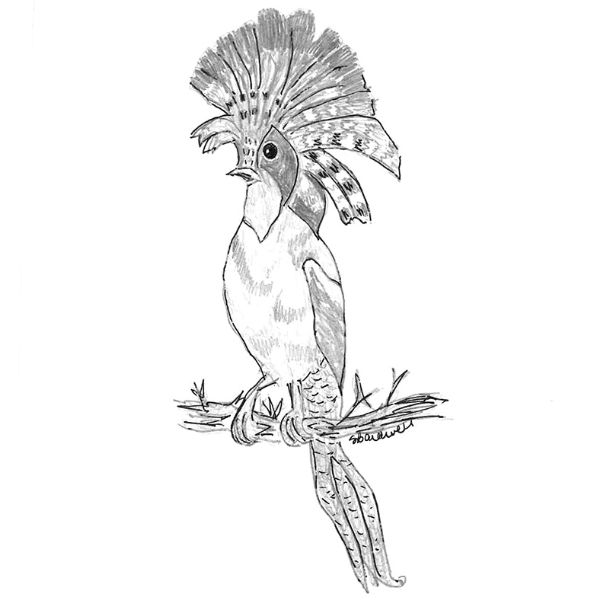 "Edwin Rist was a genius, masterminding a heist that netted him hundreds of thousands of dollars."

Why would anyone want to steal dead birds? It was the hook that grabbed author Kirk Wallace Johnson's attention. It was the hook that grabbed mine. Johnson's book "The Feather Thief" introduced a world I knew nothing about. Imagine a community of people enthralled with exotic bird feathers. Feathers of birds like the Resplendent Quetzals, Blue Chatterers, Cortinga, Crimson Fruitcrows and the Blue Bird of Paradise. Sure, I enjoy watching the dazzling plumage of tropical birds on "Planet Earth," but an obsession to pluck and possess their feathers?

The world holds within itself multiple other worlds in terms of hobbies. I went to a rodeo once on Blackjack Road. I was amazed to see cowboys eating concession-stand corn dogs, and to think they did this every weekend, traveling long distances, and paying lots of money to do so. There're sports fans, country music lovers, rock concert-goers, classic car aficionados and, surprisingly, feather collectors.

"The Feather Thief" describes collectors and competitors in salmon-fly tying. These flies never touch the water or a fish's mouth. In fact, the wide majority of fly-tiers are not even fishermen. At this level, tying and possessing such flies is art, like owning a Rembrandt. And because of the art and the rarity of exotic feathers, and the fact it is against the law to possess bird feathers, and that desirable feathers are outrageously expensive, there's a black market. Bird feathers are a commodity and for some an obsession.

"A single fly known as a Chatterer called for an astonishing 150 to 200 feathers, which, if anyone could locate such quantity, would cost nearly $2,000," says Johnson.

I found a Ceylon Junglefowl skin on the internet for $385, a Himalayan Monal for $500. Several laws protect birds: Underwood Tariff Act 1913, Migratory Bird treaty Act 1918 and the Convention on International Trade in Endangered Species of Wild Fauna and Flora signed by 182 nations covering 35,000 species of plants and animals. It is illegal to take, possess, import, export, transport, sell, purchase, barter, offer for sale, purchase or barter any migratory bird or the parts (feathers), nests or eggs, except with a valid Federal permit.

Johnson and his fly-fishing guide, Spencer, were wading in the Red River in New Mexico. Johnson, somewhat of a novice, was discussing flies with Spencer when Spencer brought out something Johnson had never seen before. "This here's a Victorian salmon fly. Calls for some of the rarest feathers in the world." The fly had a dozen different bird feathers, crimson, canary, turquoise and orange. Gold thread wound the hook's shank, " ... and it was capped with an eyelet made of the gut of silkworms."

Spencer goes on to tell Johnson about Edwin Rist, a 19-year-old American flutist and fly-tying prodigy, who broke into the Museum of Natural History in Tring, England, and stole 299 rare dead birds. Johnson confesses, "I became obsessed with the crime within moments." "The Feather Thief" tells the rest of the story of how one boy's feather obsession became an international crime.