Ask Rufus: The Passing of the Tombigbee Steamboats 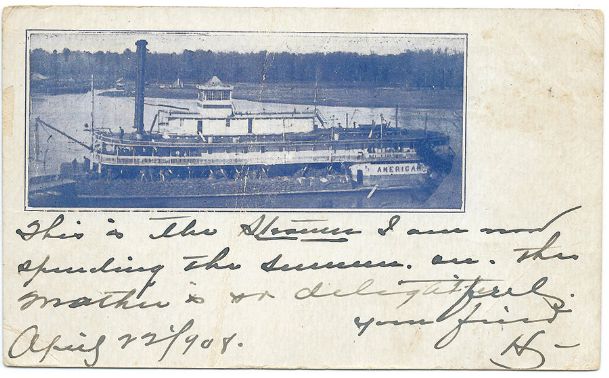 The Steamer American was a 158-by-27.5-by-4.5-foot stern-wheeler in the Columbus-Tombigbee River trade from November 1906 to March 1908. This post card image of the steamer was sent by a member of the crew in April 1908. Photo by: Courtesy photo

Shown is a January 1907 ad from the Columbus Commercial for the Steamer American.
Photo by: Courtesy image

The first steamboat arrived at Columbus in 1823. For almost 100 years they were the principal means of shipping and passenger service along the Upper Tombigbee River.

After railroad construction began in earnest during the late 1850s, the use of steamboats to transport goods decreased somewhat but remained strong. Railroads were even operating steamboats to connect river communities with their rail-heads.

The major decline seemed to start with the sinking of the Steamer Vienna in 1906. The Vienna was a 176-ton, 155-by-26-by-4.5-foot stern-wheeler built in 1898. She was built specifically for the Columbus -- Pickens County river trade and ran between Demopolis or Mobile and Columbus. On Jan. 19, 1906, while headed up river to Columbus, the Vienna struck a timber that had fallen into the river during repair work on the Columbus railroad trestle. The timber had floated downstream and became an underwater snag, which was called a "dead head." It pierced the Vienna's hull and she sank at Moore's Bluff near present day Camp Pratt.

After the Vienna sank, a steamer was needed to replace her in the Columbus Tombigbee trade. The Steamer Ouchita which had been in the Demopolis-Mobile trade began to extend its route up to Columbus shortly after the Vienna sank. She was a larger boat and dependent on the river showing 6 feet on the Columbus gage to make the trip. It was found, though, that through the use of a barge to spread out the load the trip could be made at 2-1/2 feet on the gage.

However, Columbus business still preferred owning their own boat. In fall 1906, they bought the Steamer American and brought her to the Tombigbee. She was a 158-by-27.5-by-4.5-foot stern-wheeler operating between Greenville, Vicksburg and Greenwood. The American arrived in Mobile on Oct. 24, but low water prevented her from reaching Columbus until Nov. 28.

Low water in 1906 and 1907 caused many delays in the larger boats making it up river. There were small steamers such as the Cornelia, a steamer in the lumber trade, which in low water would then transport freight. During the late spring of 1908, the American was sold to Alabama River interest and left the Columbus trade.

In February 1908, the New Haven, a smaller boat than the American, was brought to Columbus as she drew less water. The New Haven was joined in 1909 by two of the largest boats on the Mobile River system: the Hard Cash, a large stern-wheeler that had been built in 1876; and the John Quill, a 168-by-35-by-4.9-foot stern-wheeler. In April 1909, the Columbus Commercial referred to the John Quill as the "prettiest boat navigating the river."

The winter of 1913-14 was the last time that Columbus would see heavy steamboat traffic on the Tombigbee. The Charles May, a 134-by-26.9-by-3.5-foot stern-wheeler, along with another large steamer Alma and the smaller steamer Hale, were all in the Columbus trade. With a scheduled weekly trip between Columbus and Mobile, the Charles May was the last packet boat (a boat that carried freight and passengers on a regular schedule) at Columbus. U.S. Army Corps of Engineers' records reflect commercial river traffic from Columbus south continued until 1919, but the names of boats are not given.

The event that apparently changed everything was the construction of all-weather roads and the increased use of motor vehicles. The small communities that were hindered by bad muddy roads in the winter months were now more assessable and trucks were available to carry farm products to market. That change was even noted by the New York Times. A 1911 article commented: "the year 1910 will go down in history as the one in which the freight vehicle, particularly of the gasoline type, first came into generally accepted notice."

By 1912 Lowndes County and the surrounding counties were constructing all-weather roads. It is probably not a coincidence that the last steamboat running on a regular schedule on the Upper Tombigbee was in 1914, which was the same year that the first concrete road in Mississippi was built between Tupelo and Pontotoc. Suddenly, both the Tombigbee River and railroads were no longer the only ways to get goods to market.

Often people ask me where ideas for stories come from. This one came out of a conversation last week with Roslyn Davis. We were talking about history and she gave me some information on the Steamer American that I had not seen. Today's column resulted from the doors that information led to.