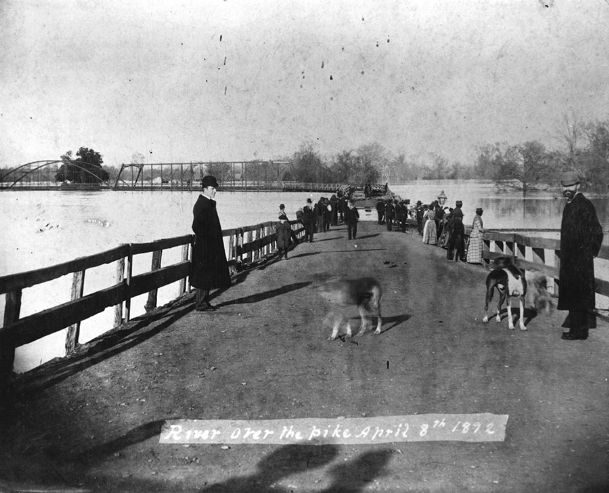 Flood waters in 1892 crossing over the Tombigbee Bridge at Columbus. This bridge was at the foot of Main Street where the vehicle bridge to the Island is now located. Photo by: Courtesy photo/Billups-Garth Archives, Columbus-Lowndes Public Library

The Tombigbee River Bridge at the foot of Main Street in Columbus during the 1892 flood.
Photo by: Courtesy photo

A view from the old Gilmer Hotel looking toward the present day soccer complex during the 1892 Tombigbee flood at Columbus.
Photo by: Courtesy photo

The flooding caused by last week's rains brings to mind high water of past times. The Tombigbee Valley has a long history of high water and floods. Some of the Tombigbee floods have been devastating, even washing away almost entire towns.

It is the flood of 1892 that is considered the benchmark crest. The Tombigbee crested at Columbus on April 8, 1892, at 42.6 feet on the Columbus gage. Flood waters were said to have reached to what is now the parking lot across Main Street from Harvey's Restaurant.

Flood stage before the Tenn-Tom Waterway was constructed was considered to be 29 feet on the old Columbus river gage. The current flood level, which is tabulated on elevation rather than the old gage, is set at 161 feet.

As of noon Saturday when I was writing this, the river was at 161.4 feet and expected to crest at 164.6 feet this afternoon.

The effects of the 1892 flood were reported in the April 14, Birmingham Age-Herald: "A sea of water; a sea of sorrow; a sea of distress; a sea of illuminations; a sea of wailings; a sea of washed up land; a sea of miles of ruined railroads, and this is only a part of the terrible flood which recently devastated the suburbs of Columbus, Miss., and many square miles of the surrounding country. The water extended as far as the eye could reach over the lands in the counties of Lowndes and Clay for several days ..."

However, the most devastating recorded flood on the Upper Tombigbee was known as "the Great Freshet of 1847." Almost the entire town of Colbert (just south of Barton Ferry in Clay County), and much of the towns of West Port (where the Tenn-Tom channel cuts old Highway 82 to make the Island) and Nashville (on the river south of Columbus), were washed away. In order to save cotton at the West Port warehouse, a steamboat sailed overland around the west end of the covered wooden Tombigbee bridge at Columbus. The new Tenn-Tom channel that cut old Highway 82 and formed The Island cut through the middle of old West Port.

The Columbus Democrat reported on December 18, 1847: "Unparalleled Freshet -- Great Loss of Property &c -- The immense quantity of rain which we have had recently, commencing on the night of Thursday week last and ending the Sunday following, has caused our water courses to rise to an unprecedented height. We have not seen that respected and venerable gentleman, oldest inhabitant, recently, but we understand he gives it up, and admits that the Tombigby never before within his recollection rose so high, spread so wide or put on the appearance of an inland sea as it has done this week. The river commenced rising early on yesterday week and continued rising with great rapidity for six days. On Wednesday evening it reached the maximum height, about one foot above the rise of the great freshet in 1841. All the low lands have been submerged to a frightful extent. From the foot of the hill on Main Street a sheet, or rather miniature sea of water, is spread out to the view, unbroken except by the tall trees for miles to the west. Many families who reside near the river have been compelled to leave their houses, which the water has surrounded, filling some of them to a depth of many feet. The steamer Putman was able Wednesday morning to take a new route. The engineer turned the bridge on the west side and steering over the old field made a shortcut across the bend, into the main stream some distance above the bridge. Where the Putman ploughed its way through water ten feet was dry land the week before.

"Immense damage, we apprehend has been done on all the plantations near the river. We have heard of the loss of several hundred bales of cotton and stock, &c., of every kind to an almost incalculable amount. At Westport alone, where there was a large quantity of cotton stored away, the loss has been estimated at from eighty to one hundred thousand dollars. What makes the loss greater is the fact that but a small portion of the cotton crop had been shipped; most of it was stored away at different landings on the river and as much of it could not be removed in time, the water, rising with unprecedented rapidity, swept if off, rendering all the efforts of the owners to save it to no avail.

"Most of the bridges in the county have either been swept away or considerably injured. The Columbus Bridge is shattered a little at the west end, but the damage can be easily repaired. The bridge east of the town over the Luxapalila has been swept off. We learn it has floated down the stream and lodged against Maj. Blewett's bridge, which has been in danger, if that too has not been carried off.

"But we are yet without information as to particulars and cannot today go into a detailed account of the many and serious losses sustained from this unprecedented freshet. Fortunately no human lives have been lost -- at least we heard of none. The river has been falling gradually since Wednesday last, but it will be several days before it gets within its banks."

While the current flood is bad the amount of destruction does not compare with that of past floods when the Tombigbee became five or six miles wide at Columbus. Thanks to the staff of the Billups-Garth Archives and Carolyn Kaye for helping with this column.