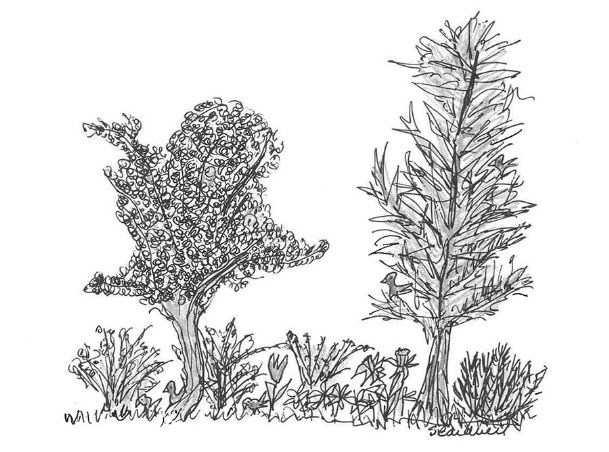 "Can words describe the fragrance of the very breath of spring?"

There are some words that are just fun to say. As I drove from the Prairie through the Southside, I said the words out loud so as to enjoy them rolling across my tongue and to help myself call to mind what I was seeing.

There were pansies, of course, Japanese magnolias tall and thin in shades of lavender, yellow forsythia and daffodils -- some bright and tiny, some pale as butter, and some with orange coronas or crowns surrounded by crayon-yellow petals placed alongside small white narcissus. There was pink quince on spindly stalks, and large white flowering pear trees, crabapple and plum trees.

It's a bit early for flowers, shrubs and trees to bloom. It's still February. Perhaps the rains and the occasional warm sunny days have urged them on. Roses came out early.

Along Fifth Avenue South were pink camellia bushes as big as trees. In a few flowerbeds were the tell-tale signs of tulips emerging and hyacinth, too.

At home, a tiny rose bounced outside my window on practically a leafless branch. I refused to cut it and instead enjoyed it swaying in the wind. Fuchsia loropetalum bloomed near the perennial garden, though it seemed to be a touch limp from the dusting of an early morning frost. I particularly love saying "loropetalum" and thought of naming Wilhelmina, my kitten, loropetalum, but she came with her name and it suits her.

The first day of spring is Wednesday, March 20, only 25 days away. You know spring got its name from flowers "springing" forth, or so it's said. The astronomical definition of spring has to do with the changing position of the earth in relation to the sun, the meteorological spring dates are calculated by climate changes and temperature cycles, with winter being 90 days (91 in leap years), 92 days for spring and summer, and 91 for fall.

It's much easier seeing warming days, plenty of sunlight and flowers bursting forth to know spring must be near at hand. The spring season is traditionally thought of as March, April and May.

Another spring sign is the activity of the birds. Outside the same window framing the tiny red rosebud at home, robins bounced across the ground, as well as male cardinals and a red-bellied woodpecker wearing a bright red cap.

Bird Watchers Digest lists these birds as the top birds of spring. Everyone won't have all of them, but it's worth it to be on the lookout. After the somewhat dreariness of winter, the first thing noticed is the songbirds: a tufted titmouse, purple and house finches, white-breasted nuthatches, singing sparrows, northern cardinals, an assortment of woodpeckers. There's the northern flicker and yellow-bellied sapsuckers, green herons, great crested flycatcher, yellow-throated vireo, cliff swallow, prothonotary warbler, summer tanager, blue grosbeak and orchard oriole.

The in-between time of winter and spring is a perfect time for sighting raptors: red-tailed hawks, Mississippi kites, osprey, eagles and owls.